View All Specs
Add a Review
It's about 90 minutes into our time with the 2017 Nissan Titan and here comes Vince in his murdered-out Hemi-powered Ram. He's right on schedule. I know what's coming. Vince is the contractor that lives down the street. His black-on-black pickup even wears the new-issue, old-school black California plates that have become the rage. And it rumbles through an aftermarket exhaust.

Not even a hello. He wants to check out the new Titan. "Can you open the hood?" he asks. "Is it fast?"
Suddenly it's a scene from the original Fast and Furious, except it's a couple of balding suburbanites comparing specs on their $50,000 4x4s in the middle of the day. Yup, it's more than a little ridiculous.

It feels like this knucklehead wants to race, so I channel my best Dom Torreto and give Vince the numbers along with a little smack talk. "This is the 2017 Titan," I say, "it's the lighter-duty, half-ton brother to the Titan XD Nissan introduced last year. It's powered by a 390-horsepower all-aluminum 5.6-liter V8 with double overhead cams, 32 valves, and direct injection. It's backed by a seven-speed automatic. And it should smoke your Hemi."

I'm not really sure that's true, but Vince seems to buy it. He backs off and turns his attention to the Titan's styling and its interior, which don't seem to impress him much. He makes a lap around the truck, jumps in the Titan's driver's seat, pushes a few buttons, and feels around a bit. He shrugs. "I like my Ram better," he says before firing up his Hemi and rumbling off into the distance. 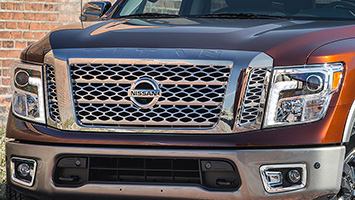 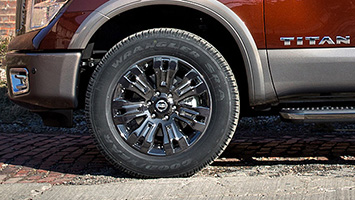 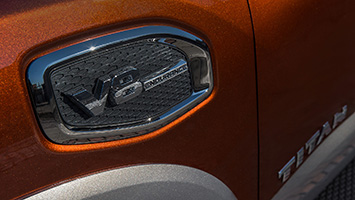 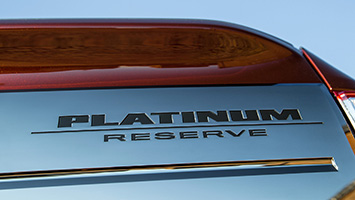 A week later, after driving the new Titan several hundred miles in and around Southern California, and a 200-mile rain soaked road trip up and down the coast, I come to the same conclusion as Vince.

Our test vehicle is a fully loaded 4x4 example in the Platinum Reserve trim. It's the top of the Titan food chain without moving up to the more capable XD line, which uses a more robust frame to underpin higher payload and towing numbers. Sticker price is $56,595. And it looks imposing and properly rich in all its chrome, dark chrome, and Forged Copper glory. Rolling on 20-inch dark chrome wheels and P275/60R20 rubber, its stance is not exactly monster-truck tough, but it's undeniably worthy of the valet at the Texas Cattle Baron's Ball. Running boards and LED headlights add additional functionality and eye candy.

At first blush, the Titan's interior also justifies the truck's lofty sticker price. Nissan's been rockin' interiors lately. The Murano, the Maxima, and the new Armada are all packing incredible interiors that look and feel special for their segments. And our Titan's guts look fantastic in its black and brown two-tone and cube-tufted leather seats. Contrasting stitching is everywhere – on the seats, the dash, even the shifter. Nice touch.

The wood and leather steering wheel is also properly upscale, as is the list of amenities including heated and cooled front seats, a heated steering wheel, heated rear seats, navigation, and other cool tech like the Around View Monitor with Moving Object Detection. It makes parking this beast a snap. Gauges are clear and attractive. Everything is easy to find and easy to reach. And the center console could swallow a teenager. 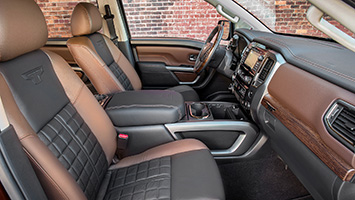 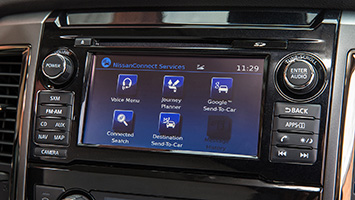 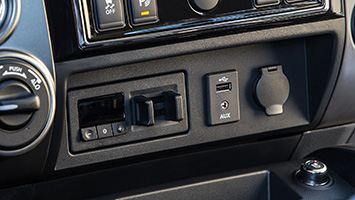 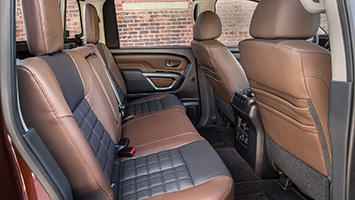 Unfortunately, some of the details are off. The trim doesn't feel as good as it looks, feels cheap. The nav screen, at 7 inches, looks small for 2017, especially in a vehicle of this size, and in fact it is the smallest screen in the segment. It gives the entire interior a dated, woulda-been-cool-a-few-years-ago vibe. And the seats, although generally comfortable and super-size-me wide, are a bit flat, especially the seat bottoms. Thigh support became a problem on our road trip.

Little else did, however. The Titan covers miles admirably. This is a vehicle you want to drive to Vegas for the weekend...from Pittsburg. The Titan's interior is quiet and its leaf-spring rear suspension provides a good overall ride, certainly for a truck of this size, but ride comfort is still a few clicks behind the coil-sprung Ram, which remains the class leader for cush.

Fuel economy was also just okay. The EPA rates the truck at 15 mpg city and 21 highway. With four aboard and its 5.5-foot bed empty, this Titan averaged 17.1 mpg on the rainy road trip.

Around town the Titan doesn't trip too often, but it feels big and just a little clumsy compared to the more carlike Ram and the more athletic F-150, which has a very likable light-on-its-feet way of going about its business. The Ford is definitely the sport sedan of the segment.

It's hard to pinpoint why the Nissan feels large in and around the suburbs, but its slow, heavy steering doesn't help. Neither do its huge A-pillars, which can cause some visibility issues. You need to look twice for the pedestrians at every crosswalk. The outside mirrors are the perfect size, however, and keep blind spots to a minimum. 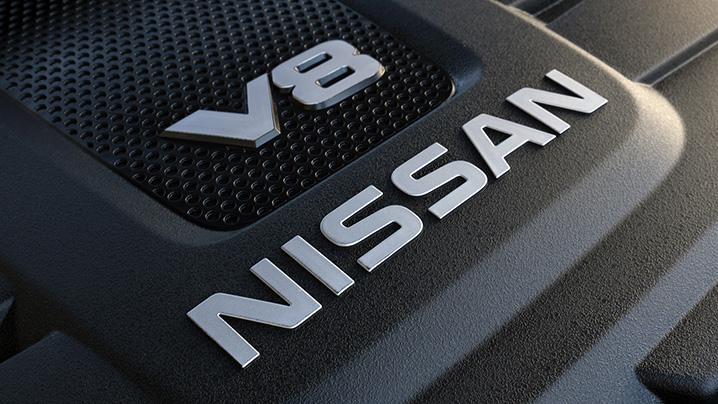 The best parts of the new Titan are its powertrain and functional bed features. The big V8 and seven-speed auto are fantastic. Nissan is at its heart an engine company, and the engineers did this one right. Remember this combination is also used in the Titan XD as well as in the Armada and Infiniti QX80, so Nissan needed to get it right, and right it is. Smooth. Powerful. And it sounds good. This 5.6-liter feels like it was designed by enthusiasts for enthusiasts, delivering excellent throttle response, good low-end torque, and a nice kick in the upper ends of the tachometer.

The Titan's automatic is equally as good. Gearing and response, as well as the firmness of the shifts, are all spot-on. Manual shifts are possible with an up or down toggle on the shifter, which works well. Overall, the powertrain is a great combination and possibly the best part of this truck. After a week pushing it around I'm pretty sure it would have smoked Vince's Hemi.

Nail it off the line and the Titan goes like a muscle car with slight spin of its rear tires. Keep your foot down, and good firm gear changes click off right on the tach's 6,000-rpm redline while speed builds. Driving the Titan like you stole it is asking for a ticket. Highway merging, even when loaded, is not a problem for this pickup.

Although I didn't come anywhere near the Titan's 1,610-pound payload maximum, I did make a Home Depot run for just enough manly stuff to give the Titan's factory spray-on bedliner and Utili-track Channel System a mild workout. The track system, which was pioneered on the first-generation Titan, is a series of channels in the bed floor and bed side rails that accepts removable cleats which slide into the channels, providing a wide range of attachment points for securing cargo. There's a reason why this system has been emulated by other manufacturers. It really makes strapping things down far less stressful – just remember to pack your own rope or bungee cords. 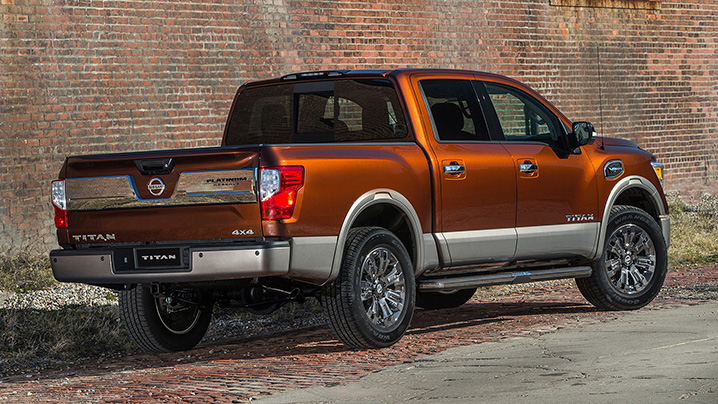 Other bed features on this Titan test truck that impressed were its 120-volt power outlet and the LED lighting under the bed rail, which makes any truck with a single lamp above its backlight seem old fashioned. There's an engineer or product planner at Nissan that likes loading or unloading stuff at night. Or tailgating.

The new Titan is absolutely impressive in many ways. It's comfortable and fast, and its functionality and innovative bed features are extremely attractive. But somehow that just doesn't add up to a strong enough entry to rejigger a very well-established and highly competitive full-size truck market.

Aside from the Titan's five-year/100,000-mile warranty, it doesn't really leapfrog that stiff competition in any measurable or even emotional way. Not consistently enough, anyway. Not so much that we can predict that a goodly number of Ram, Ford F-Series, and Chevy Silverado/GMC Sierra owners are going to bail on the trucks and brands they're invested in. That said, owners of the previous-generation Titan will love it, and Toyota should be worried about the Titan stealing more than a few from team Tundra. They do still make the Tundra, don't they?

Maybe I should ask Vince. He had one before he bought his Ram. 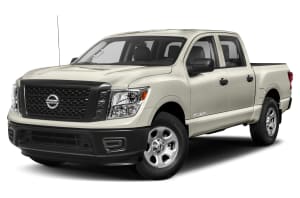