Inside the Aston Martin Heritage Trust, the company's secret museum

The Aston Martin Heritage Trust Museum has been in existence since 2002. It houses the official archives of the Aston Martin Lagonda Company, as well as those of the Aston Martin Owners Club, at the behest of which the Museum was founded back in 1998. It also houses a rotating collection of distinctive and historically significant Aston Martin vehicles, cherry picked from a century of the automaker's exquisite existence.

Unfortunately for those besotted with the brand, as I am, the AHMT is located on the periphery of the exurbs of nowhere, in a restored 14th century barn on a dirt road, blocks off the river in the wee Midlands village of Drayton St. Leonard. An address is not published. The only indication that you might be in the right place is an almost intentionally innocuous government tourism placard, placed somewhat near the turnoff.

"We used to maybe get a hundred visitors a year before they put up the sign," says AMHT Curator Donna Bannister, an American of equally mysterious provenance. "Now we get almost a hundred per month."

Lucky are the souls who find the AMHT (my cabby wasn't among them; I had to walk a bit), because it houses, in its cramped Middle Aged quarters, some real treasures.

Greeting me when I entered was a bare-metal-nosed 1921 A3, the oldest existing Aston Martin in the world, which was bought at auction in 2000 and restored to driving condition via the generous underwriting of Sheik Nasser of Kuwait, who is apparently a huge AM collector. "It won Kop Hill in 1923," Bannister says. "We recently took it back there, and to the Windsor Concours d'Elegance. Of course the Royals are big fans of the Aston brand." 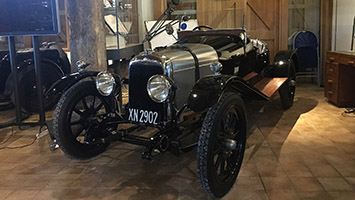 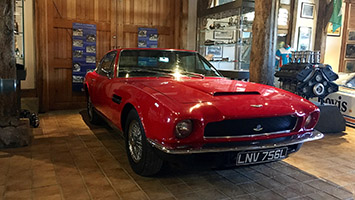 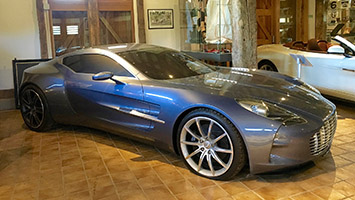 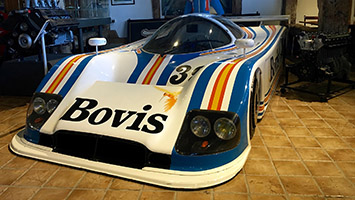 There's also a 1934 Ulster BLB 684, the only remaining one in a 2+2 configuration. This car is a driver as well. "Club members can hire it out," Bannister says. "Though because it's quite difficult to drive – it has the clutch in the center, and the gas and brake on either side – only a few do."

There is a passel of more recent notables, like the 2000 V12 Vanquish cutaway, an auto show maquette meant to demonstrate the fruits of Ford's huge investment in the brand at the start of this century. There's a pre-production, gloss white 2013 Vanquish Volante, which was used for photos and promotion as well, but never registered due to some inconsistencies in the paint. There are display engines from the DB4GT, the Lagonda V8, and the twin-supercharged Vantage (swoon!). There's an early Eighties Aston Martin/Nimrod racecar, complete with period livery, and period livery ski jacket, which, like most Aston Martin products of the period, was a valiant failure. And there's a design verification model of the outrageous One-77, an engine-less, non-operational, scale prototype, meant to confirm the viability of this seven-figure supercar.

"Notice that it has four different wheels," Bannister says, "so that the executives could judge which ones they thought looked best." I notice. I prefer the right front.

There are also multiple glass shelves and flat files full of ephemera. The AMHT has received collections of toy cars, trophies, posters, and especially photographs from club members, former executives, and factory de-accession. "We have an especially large collection of images – tens of thousands – from Roger Stowers, who was an employee of Aston Martin for decades, and a sort of self-appointed archivist," Bannister says, sliding out a drawer full of his black-and-white photos of Seventies assembly-line workers. They appear to be very intentionally, if haltingly, assembling engines and joining them to chassis. During this penurious era, I was once told, Aston employees had a tradition of applauding when a car left the factory under its own power. I'm transfixed. For a child of the era, malaise emits an impossibly evocative nectar. 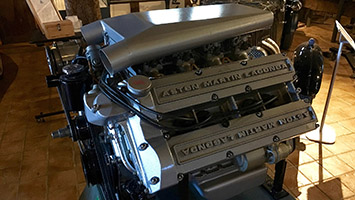 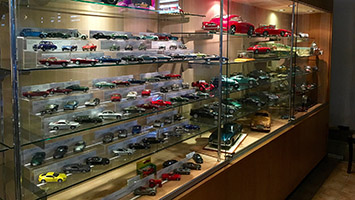 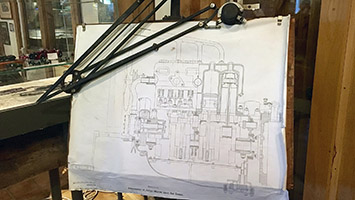 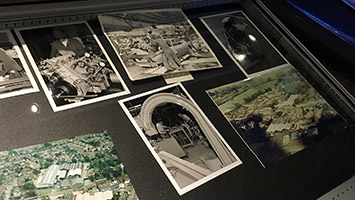 But I'm more transfixed by another Seventies relic, a car that, despite familiar cues, I cannot identify. It turns out that it's an AM Vantage, the second of only seventy that were ever made, a transitional anomaly of the interim period between David Brown's legendary stewardship of the brand (the initials DB in the marque's best-known cars are derived from his) and its subsequent ownership by the ominous/generic-sounding Company Developments.

"It's essentially a DB6 with a different body," Bannister says. "They had seventy leftover DB6 chassis and interiors, so they built these." Because it was one of the cars constructed during this stopgap time, it still sports David Brown badges. I'd prefer that it still sported its original cricket white paint job as well, instead of the Corvette red it appears to wear. "Next time it needs a repaint," Bannister says, "this will be a big topic of discussion and debate."

Having surveyed this odd and enthralling assortment, I ask Bannister if she's on the prowl for anything else to add to the collection. She nods enthusiastically. "We're always looking for cars, cars of historical significance. We'd like to have a DB4, DB5, or DB6, but those have gotten a bit unaffordable," she smiles with a mix of avarice and appreciation, and sloughs things off to the museum's lack of space. "We've actually been promised a number of cars from the estates of club members – a DB2 and DB9. But," she shrugs, "they're still quite young. That could be a while."