Joel Stocksdale
You probably don't give much thought to wheel weights, and to be honest neither do we. This week, we visited 3M's office in Livonia, Michigan, and saw how one of the company's ideas evolved into an efficient new process for vehicle manufacturing. To appreciate it, though, we need to start with an earlier wheel weight innovation.

Traditionally, wheel balancing weights are made out of lead and applied by hand; the process is slow and it puts more highly toxic lead out into the world. A few years ago, 3M introduced a new type of wheel weight made of a lead-free, mostly recycled material with a high-density foam adhesive in long spools. The material could be cut to the exact weight needed, meaning large inventories of weights were no longer necessary. The weights were first made available to aftermarket service shops in 2007.

Later, a company called Esys developed a machine for manufacturers that could take an alloy wheel that had been automatically balanced, and then dispense, cut, and apply weights on its own instead of having a person apply them. It also did the job in just 11 seconds instead of roughly 30 (you can see it in action in the video above). The only problem was, the machine could only do alloy wheels, so it wouldn't cover all wheel jobs at all factories. 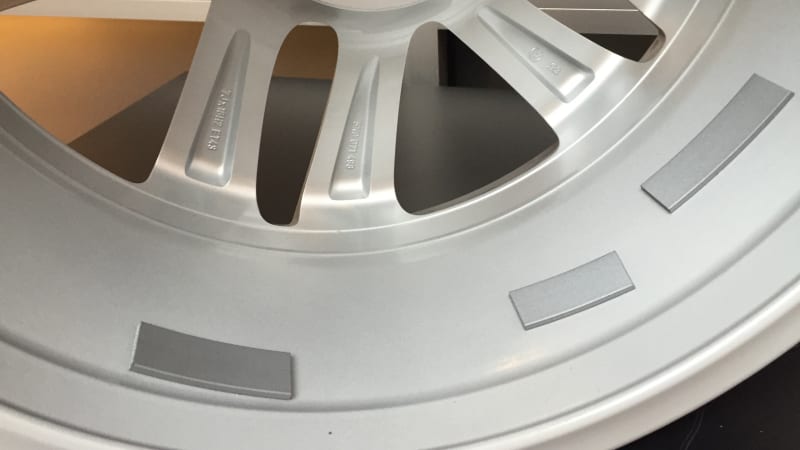 The new product solves that. Esys's new machine, the AutoW8T, functions effectively the same way as the alloy wheel machine. The primary difference is in the tape and where it is applied. Instead of the flat tape used for alloys, the steel wheel tape has a slight radius to it. This different shape is necessary because the machine applies the tape to the steel wheel's flange, where clip-on weights would go. The alloy wheel version applies tape to the drop center of the wheel instead. The steel wheel machine was also made to be modular, and can be stacked on top of an existing alloy wheel machine. The steel weight applicator is even quicker than the alloy one as well, placing weights in just nine seconds.

Now that there's a weight application machine that can handle every wheel a company produces, the traditional wheel station can be eliminated entirely. This could also give companies the opportunity to save money with faster, simpler production and inventory. Of course, whether that savings would trickle down to consumers would be up to car manufacturers. At the very least, it's a cool technology, and you can see how it works in the video above.