Better, but only just.

Sometimes things just work out, with fate conspiring to help you do your job. That was the case with this review – we needed a way to get from our Michigan base to Chicago to test the restyled 2017 Chevy Trax, and it just so happened there was a 2016 model available to make the trip in. It's rare we get to do a direct back-to-back test.

If there's one thing we learned from the 600-mile round trip in the 2016 Trax, it's that Chevy's smallest CUV has a lot of room for improvement. After a full day of city-heavy work with the 2017 model, it's clear GM addressed some of its smallest crossover's glaring flaws. This is the CUV Chevrolet should have introduced in the first place.

Those changes don't really concern the hardware. The Trax is the same basic Gamma II-based crossover it was before, a sibling to the Buick Encore. It again comes standard with a 1.4-liter, turbocharged four-cylinder Ecotec engine with 138 horsepower and 148 pound-feet of torque mated to a Hydra-Matic 6T40 six-speed automatic transmission, with standard front- and optional all-wheel drive. Like the Encore, the Trax rides on McPherson struts in front and a torsion-beam rear suspension, and the rack-and-pinion steering has electric assist. 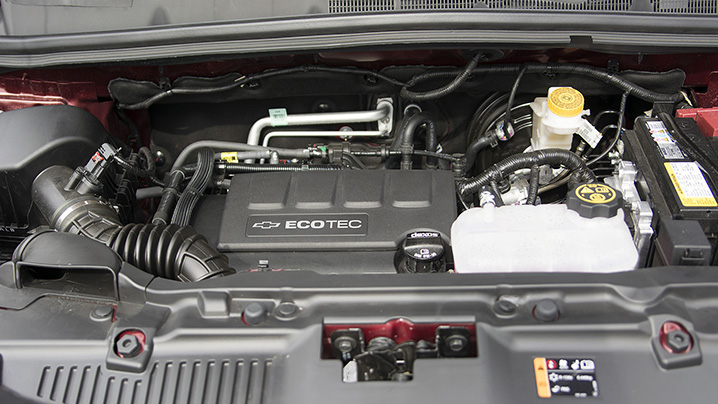 With that in mind, we'll keep the driving impressions brief, because the 2017 Trax is indistinguishable from the 2016 model behind the wheel. The turbocharged four-cylinder sounds buzzy and gasps under hard acceleration and at freeway speeds, but it's smooth and reasonably quick around town. The six-speed automatic is fine, in that easy-to-ignore way that typifies most commuter-focused transmissions, and the suspension tune leans heavily towards comfort without actually being too comfortable. The ride crashes and bounces over rough roads, with every impact, noise, and vibration transmitted clearly into the cabin. And it's not much fun either – there's too much body roll and the steering is too soft to offer an entertaining driving experience. The changes from 2016 to 2017 are instead on and just under the surface.

For one, the 2016 Trax is a homely little jelly bean. It's a bloated Aveo on stilts to the relatively fashionable Encore. For 2017, Chevrolet's designers addressed styling criticism – to a degree. The new fascia has the look of a modern, US-market Chevy instead of recalling the unattractive, not-for-the-US Orlando MPV. In fact, the LED-lined nose for 2017 is reason enough to pick the refreshed car over its predecessor. Sadly, the dramatic improvement doesn't extend to the tail, which is a largely carryover design. 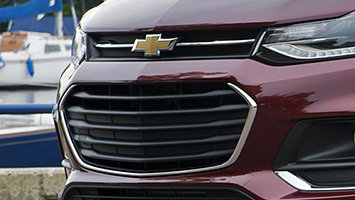 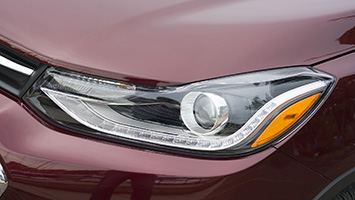 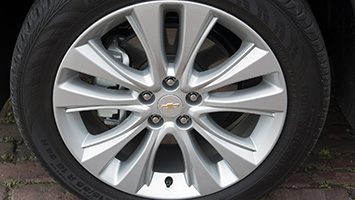 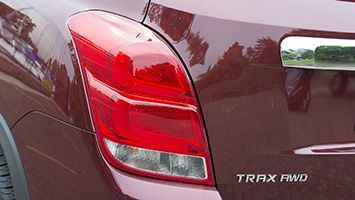 But the cabin's changes are more dramatic than the exterior improvements. The Trax still has one of the cheaper-feeling interiors in this affordable segment, but the 2017 offers both improved materials and a better overall layout. The transformative effort starts with the instrument cluster – like the Sonic compact car it shares parts with, the Trax ditches its odd, motorcycle-inspired gauge cluster for a more conventional layout with an analog tach and speedometer left and center, and a monochrome information screen on the right. While we'll lament the loss of a digital speedo, the new layout is both easier on the eye and better at conveying trip information. If only the fuel gauge had also made the move from digital to analog, we'd have a better idea of how much fuel is actually in the tank.

While the new instruments are nice to look at, super-cheap black plastic still dominates most of the rest of the view on the dash and doors. On higher-end grades like the Premier (it replaces the LTZ trim level for 2017) there is a color strip of faux leather for the dash and door panels, and piano black trim around the seven-inch infotainment screen and HVAC controls. These changes are possible because designers purged the plethora of semi-useless slots and cubbies from the 2016 model, crafting a cleaner and more uniform dash for 2017.

Still, the improved cabin represents a net loss. Chevy sacrificed too much versatility in its quest to improve the Trax's cabin design and materials. This little vehicle does not have a center console – there are just four cupholders running between the front seats – so by ditching the 2016 model's cubbies and storage slots, the only compartments left in the Trax's cabin are the glove box and a tiny change tray ahead of the shifter. Chevy makes it clear that the Trax is a car for urban millennials, but, as a millennial, your author can confirm that having convenient places to stick smartphones and other stuff is kind of a big deal. 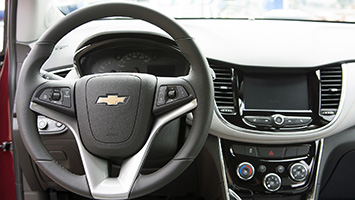 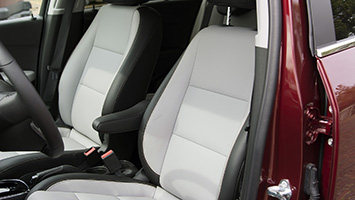 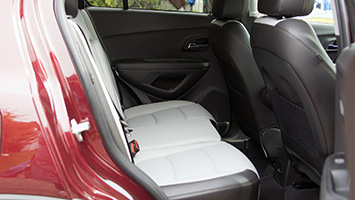 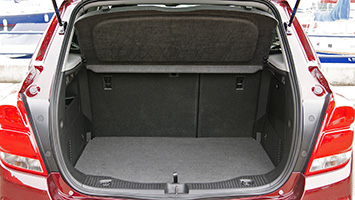 Then again, while a nearby spot for your phone is good, you don't really need to look at it. Like a lot of new vehicles, the Trax's updated MyLink system features both Apple CarPlay and Android Auto. It's a welcome move considering MyLink's limited abilities as a standalone platform. The new seven-inch display's graphics look better, and the touchscreen feels better, too. In the 2016 car, the display's surface flexes with each input, but the 2017 MyLink screen feels more solid and responds more precisely to inputs, to boot. Oh, and MyLink, CarPlay, and Android Auto are all standard, which is probably the Trax's biggest selling point, especially on the base models.

There are much-needed tech updates in the safety column as well. Chevy achieves parity with some of its rivals and surpasses others by offering optional blind-spot monitoring, rear cross-traffic alert, forward-collision alert, and lane-departure warning. And on the convenience front, certain trims offer push-button start as standard. But there are still some tech pieces missing.

For example, unlike the Mazda does with the CX-3 and Jeep will starting with the 2017 Renegade, Chevy isn't offering an upgrade for the Trax's lousy halogen headlights. The available single-stage heated seats force drivers to either roast their butt or freeze it off, there's no heated steering wheel option, and all HVAC systems use manual controls. These are shortcomings compared to the Trax's many competitors, and the price doesn't reflect the lack of features. 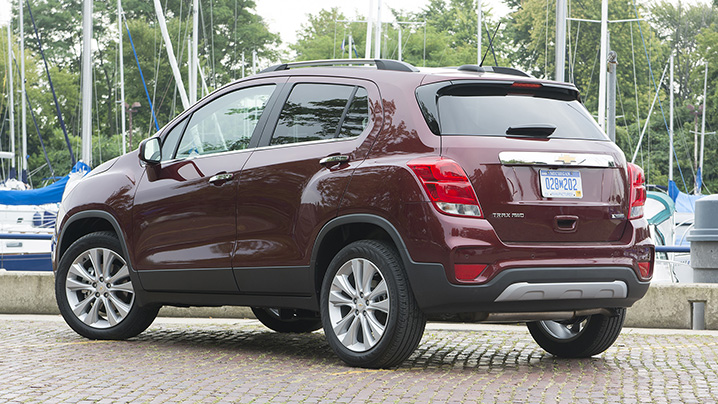 The model we drove, a Trax Premier with all-wheel drive, costs $29,490. Do a little cross-shopping, and you'll find that's a big number for the meager options list. The most expensive version of the admittedly smaller Mazda CX-3 GT comes with forward collision mitigation – not just alert – automatic high-beams, LED headlights, and adaptive freaking cruise control, along with everything on the Trax aside from Apple CarPlay and Android Auto, for $28,610 (and that's with extra-cost paint). A fully loaded Honda HR-V sells for almost $2,500 less, if you're willing to give up a few of those safety features. And the Jeep Renegade Limited, which lists some of the Trax's safety items as optional extras, is just a smidge more, at $30,005. The bottom end isn't much better – the Trax starts at $21,895, which is $1,035 more than a base CX-3, $1,630 more than a starter HR-V, and $2,905 more than a Renegade. We won't break down all the various standard-feature differences on the base cars, but CarPlay and Android Auto are the only major things you'll miss by choosing a more affordable rival.

Chevy's changes for the 2017 Trax bring about a better cabin and an improved choice of equipment, but the reality is that even after this refresh, we're looking at one of the worst values in the segment. If Chevy wants to build a competitive Trax, it needs more than a few extra safety features and a prettier face – it needs a competitive option set, a more enjoyable driving experience, and better interior materials. Until that happens, we strongly recommend spending your money elsewhere.