"Garbanzo? Costanza? Credenza?" I can't tell if the guy at the bakery is trying to be funny or if he's genuinely forgetting the name of the car – I've told him twice; it's the 2017 Kia Cadenza. But you know, maybe the miscommunication is just fine. Like the Cadenza itself. It's fine.

You shouldn't read that negatively. Every now and then in this job, you drive a car and simply come away thinking, "it was fine." And if you're building a car in this particular segment, that's practically the response you hope to elicit. A comfortable jack-of-all-trades at a price that isn't going to bankrupt the owner. Consider the Cadenza's competition: Toyota Avalon, Nissan Maxima, Chevrolet Impala, Buick LaCrosse. These aren't groundbreaking luxury vehicles, masters of utility or fuel economy, or Nürburgring-smashing sports sedans; they're... fine. You almost feel bad saying it – from a very reasonable angle it's a great segment, populated with cars offering a lot of the same equipment and a little more bang for the buck than a full-on luxury sedan, and tending to be roomier, too. And yet it's that dilution of dedicated purpose that keeps these models stagnant in showrooms compared to the more luxurious – and certainly to the more economical. It's hard to raise an eyebrow here.

So it goes with the Cadenza. Despite looking a heck of a lot like the previous car, the new Cadenza has been reworked significantly – the use of high-strength steel has doubled, to over 50 percent; the use of hot-stamped steel has tripled; the doors are 16 percent more dent-resistant; the chassis has 35 percent greater torsional rigidity; there's a new subframe (similar to that of the Optima); the front windows are now laminated and there's 13 percent more sound insulation in the A-pillars; there's a full underbody cover and wheel air curtains; it has a new eight-speed transmission – developed in-house; there are 40 fewer pounds of unsprung weight thanks to aluminum parts; the brakes are bigger; and there's a bevy of upscale tech features – but we lost you halfway through that paragraph. 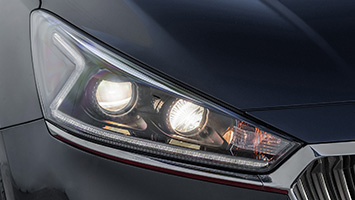 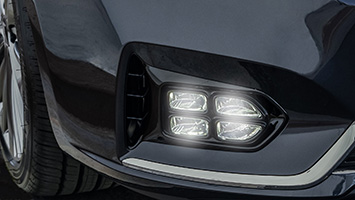 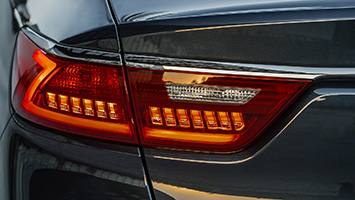 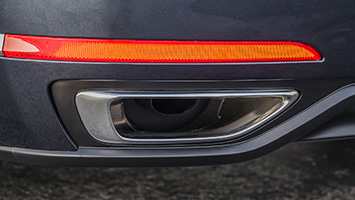 The styling is a little sharper than the outgoing model's – it's not going to blow your pants off, but it's hardly a bad-looking car. The updated design features Kia's now-trademark quad-LED setup within the lower front grilles, and the main grille is a concave affair – base models get a "Diamond Butterfly" insert you know from other Kia models, and higher-end Cadenzas get "Intaglio" vertical slats. Keep walking around the car and you'll find the sides have been flattened out a bit and the taillights have received a welcome tightening. The mash of little tweaks and updates mean that the 2017 Cadenza is at once easily confused with the old car and unmistakably the new one. It's hard to explain and sort of the nature of the segment to be a bit anonymous; if you're not, you're the new Nissan Maxima. Points for trying, but we'll take anonymous.

Things are fine inside, too. Kia is quick to celebrate the airy and open cockpit of the Cadenza, and we can't help but agree – it's a pleasant place to be, very similar to that of a modern Audi, maybe minus the plastics quality. No coincidence there, of course – the wide, flat dash and the way the front door handles scoop forward into the door are no-brainer cues from chief designer Peter Schreyer's previous place of employment. We could do without the plastic analog clock – the central timepiece is something you do if you're going to use glass or sapphire crystal; abandon otherwise. Ditto the diamond stitching on the Nappa leather seats of our loaded test car – nothing wrong with it, per se, just something that's probably better left to Bentley. That said, the 14-way front seats are very adjustable (although we did find that the thigh support didn't extend quite far enough), and the rear cabin offers gobs of space, no matter your size. You'll hear zero complaints about taking this Kia on a road trip, in any seat. 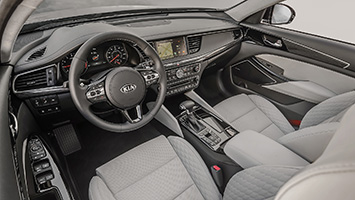 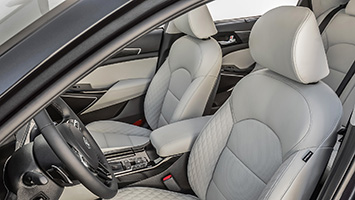 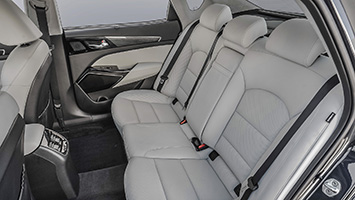 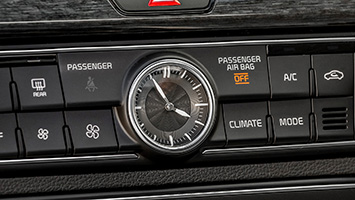 Want to guess how the Cadenza drives? Fine. It drives fine. The electric power steering has been redesigned to offer "almost hydraulic-like feedback," thanks to an upgraded, 32-bit processor. The extra bits are meant to offer better on-center feel, but you can wiggle the wheel right to left pretty significantly at speed before getting a reaction from the big sedan. That said, it's not all bad, particularly compared to the overly artificial feel of too many electric power steering systems on the market. Here, there's not the need to correct constantly – it's a solid 7 out of 10 as electric racks go – especially given the vehicle class. Hydraulic-like, though? It's not even in the same zip code.

The Cadenza can be equipped with the requisite flock of advanced driver-assist systems, but none of them are going to mess with the steering wheel: There's the blind-spot detection system, which has the ability to intervene by braking the opposite side front wheel if your Norah Jones playlist has lulled you to sleep on the highway; adaptive cruise control with stop and go functionality if your knees are going; forward collision warning if your brain is; and autonomous emergency braking if both are already gone. Then there's an almost unbelievably sensitive lane-departure warning system, which will beep at you when the first thought of deviating from your course begins to form in your subconscious, but then, bizarrely, not correct your course. There's an around-view camera for parking maneuvers and a head-up display, too. 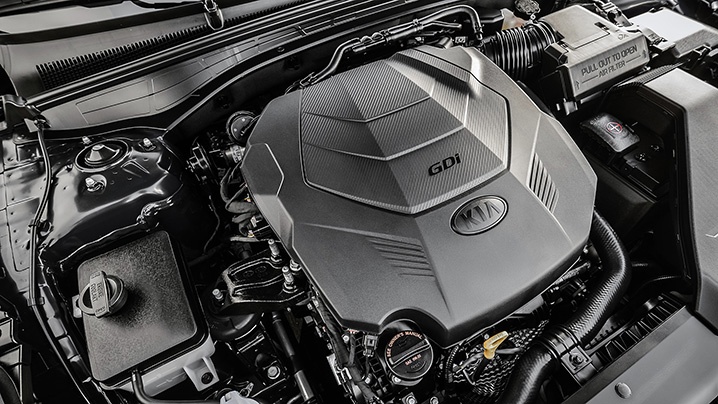 The Cadenza retains its 3.3-liter direct-injected V6, which now offers 290 horsepower and 253 lb-ft of torque. You may notice that those figures are actually slightly down compared to the 2016 car's (293/255). It's sort of academic, though, as the new eight-speed transmission makes up for the reduction with two additional ratios and a shorter final-drive. Said transmission was developed in-house, and we have no complaints – like all modern transmissions, it's programmed to make its way up the tree to top gear as quickly as possible in an effort to maximize fuel economy. Here, though, the desire to charm you at the gas pump doesn't get in the way of drivability: The Cadenza downshifts predictably as you press your foot farther and farther into the pedal stroke, avoiding the sudden triple or even quadruple downshifts that plague some modern nine-speed transmissions. The combo feels well-matched to the chassis, offering plenty of torque and easily rushing the Cadenza to triple-digit speeds when you call for it, and you're almost never left wishing for a lower gear. If there's a penalty for the big engine's application, it's at the pump, and it pretty much applies to the whole class. The Cadenza manages 20 mpg in the EPA's city test and 28 on the highway.

Kia says the new car will start about a grand cheaper than its predecessor, at "just under $32,000," and climb all the way to "just under $44,000," which is a full 37 percent bump to the base model's price. The striking factor here is that the core ingredients remain the same – in all trim levels, the Cadenza is front-wheel-drive and powered by the 3.3-liter V6. Credit a lot of that difference to the dynamic driving systems offered on the higher-end Technology and SXL trims.

So while it's easy to understand – and even like – the what and the how, the tricky part might be the "why." Why build the Cadenza? The segment isn't exactly booming, and even in the relative sense, the Cadenza, which has been in production since 2013, sells in extremely small numbers compared to competitors like Avalon, Maxima, and LaCrosse. Still, though, if you think those cars are fine, you owe it to yourself to check out the Cadenza. 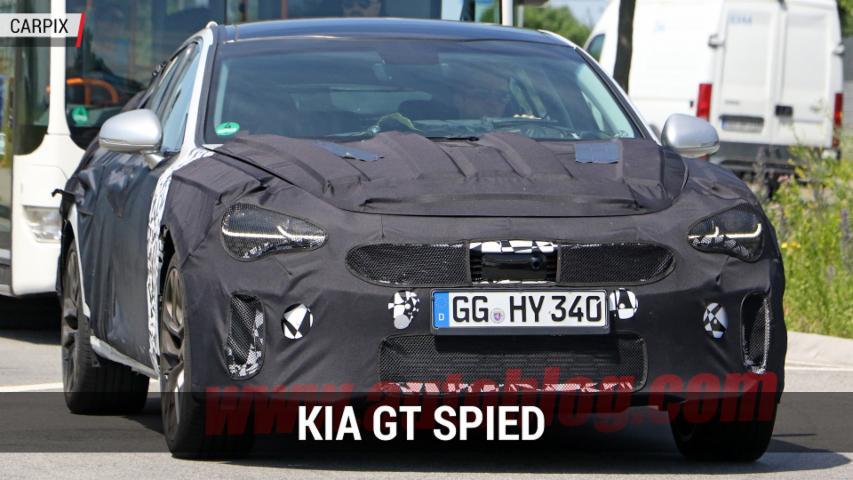