The 2017 Ford Super Duty is big, a fact that cannot be ignored. Whether you're looking at an F-250, F-350, or F-450, it's larger in just about every dimension than its predecessor, and at or near the top of the bigness charts among heavy-duties. About the only thing that's smaller is the blue oval in the grille, but that just means there's more room for chrome.

As befits the segment, the Super Duty is more, too. The maximum towing capacity is higher than before, the cabs have more space, the engines are stronger. The spread of available toppings is wider-ranging, with more luxury features, tech add-ons, and available conveniences than any other heavy-duty offers. You can even drive it longer distances – a newly available 48-gallon tank makes a non-stop 1,000 miles possible, and a new quad cup holder means you won't need to stop for coffee for at least that long.

You get more space for humans in the cab, too; all three – regular, SuperCab, and SuperCrew – are shared with the F-150. The floor in the rear of the SuperCab and SuperCrew is flat, which allowed Ford to add a new lockable under-seat storage compartment for the Super Duties that you can see in the second video in the playlist below; engineers point out that one advantage of the shared cabs is an easier flow of advancements between the F-150 and the Super Duties. When asked whether the under-seat storage locker was one such transferable advancement, we were told that would make a lot of sense. Finally, something we said made sense. 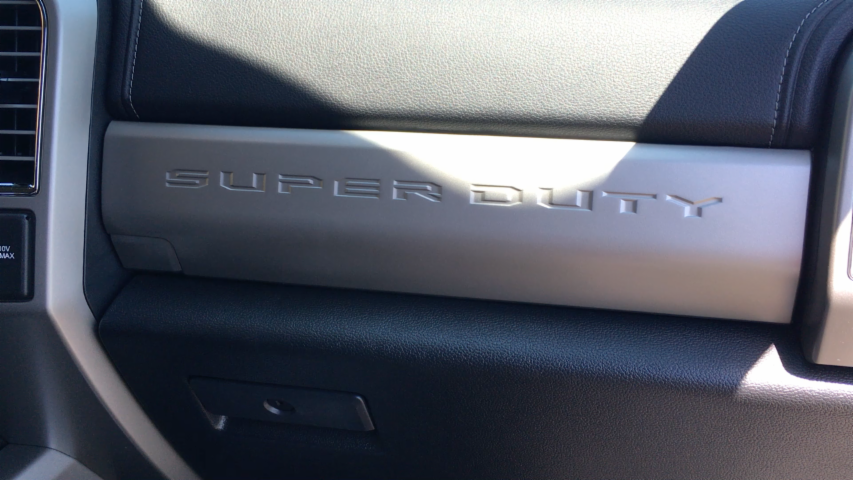 Items that come directly from the F-150 include available heated, cooled, and massaging seats; the big center screen with Sync 3; a large driver-info display between the gauges; and just about every trim piece, button, and part, save for a few that are Super-specific. This is the first new set of cabs since the Super Duty name was initially applied to F-250 models and above for 1999. Yes, the Super Duty lineup has had the same basic structure for 18 years. Watch for it in voting booths this fall.

But those big new cabs also appear perched higher on the frame than before. This is partly because the truck is taller and partly because the door skins and fenders no longer extend down as far, and therefore don't hide as much of the frame. You can see it down there, especially in the middle where the rail is 1.5 inches taller. You can sense it when you try and get into a truck that isn't equipped with fixed or power running boards. And those with side steps hang them farther down from the door openings.

Like the F-150, the Super Duty trucks switch to aluminum construction above the belt. That means the cabs, fenders, and box are all made of the lighter-weight alloy. To accommodate the more-super duties of these trucks, however, the thickness of the bed has been upped versus the F-150's, and the pattern of the bed channels was changed to increase stiffness. That should let you drop up to 7,630 pounds, the maximum payload for an F-Series pickup, into the bed without crumpling it like aluminum foil. 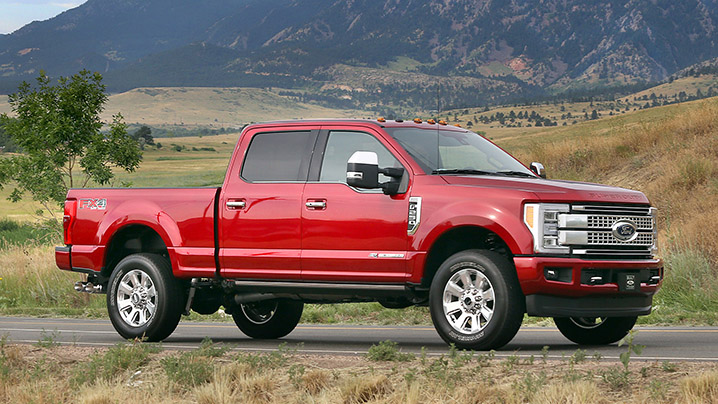 That max payload figure is one of several segment-best figures Ford is very happy to bring to our attention. It's achieved with an F-350 with the regular cab, dual rear wheels, rear-wheel drive, and the gas V8. Ford also claims a best for gooseneck towing among heavy-duties, with a 32,500-pound max with the F-450 pickup, which is only offered as a dual-rear-wheel 4x4 with the Power Stroke diesel. The F-350 isn't far behind with a 32,000-pound rating when equipped with the diesel and dual rear wheels. Both numbers beat the Ram 3500's 31,210-pound gooseneck rating, and we're sure that's no coincidence.

The aluminum body was more of a means to an end this time around, and the company makes less of a fuss about these trucks weighing less (up to 350 pounds is the claim) than it did when the F-150 (which lost as many as 700 pounds) went aluminum. Instead, Ford's reps point to the increased capability of the new Super Duties.

Some of the reclaimed weight went to making the trucks bigger. A reinforced frame with a longer wheelbase equals more weight. Larger cabs? More weight, at least relatively speaking, since they're now aluminum. More features, more weight. Beefier suspension parts and axles on certain models – yep – they add weight. But what they also add is the measurables that bring bragging rights.

One very useful feature that works to hide some of that size and heft is the optional adaptive steering. It's similar to the system first offered on the Ford Edge – a gearset and small electric motor are nestled in the steering wheel and can add (or subtract) steering angle relative to what you put in. At low speeds, it adds a lot, making parking-lot maneuvers less of a chore. At highway speeds, it adds less, and only once you've left dead-center, which avoids a twitchy or over-boosted feeling. When you have the truck in Tow/Haul mode, the system removes some steering angle, slowing your inputs to keep everything moving smoothly. It works incredibly seamlessly, to the point that you really can't tell anything is different unless you pay attention to how little work you're putting in and how few rotations the steering wheel requires. We drove similar vehicles with and without the system back to back to reinforce this conclusion. Adaptive steering is a huge help on twisty roads, making it almost chuckable and giving the feeling of a truck that's smaller than it is. Okay, less big. 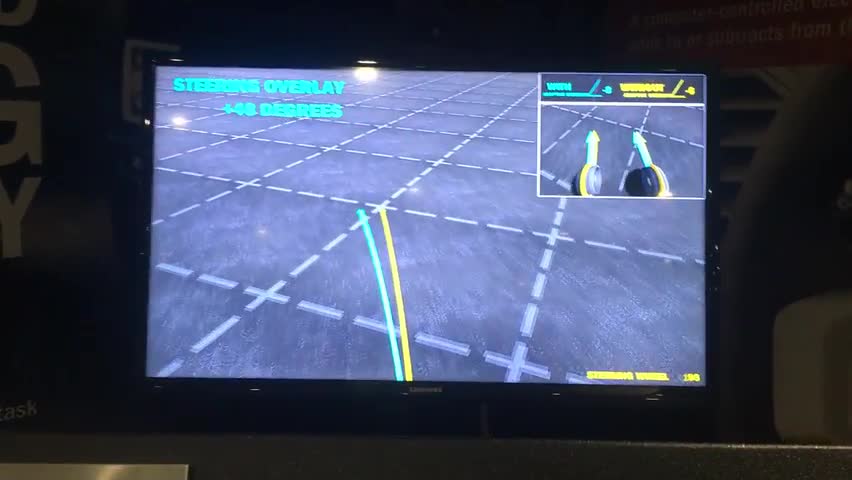 If you're wondering why the Super Duty pickups don't get the park-assist and lane-keeping systems from the F-150, it's because the bigger trucks still use hydraulic-assist steering; electric power steering systems, required to implement steering-related functions, can't cope with the massive front-end loads of the heavy-duty trucks. Even without the adaptive gizmo, the Super Duty steering feels more connected, like it's actually responsible for where the truck goes, not just there to suggest a direction. It's not over-boosted anymore and centers itself nicely. We'd still recommend the relatively small investment ($650 standalone or included in some packages) to get adaptive steering, as it makes all types of driving that much more pleasant.

There's more output from both available engines (chassis cab customers get a third option, the somehow-not-dead-yet 6.8-liter gas V10). The 6.2-liter gas V8 now makes 385 horsepower and 430 pound-feet of torque, and it's backed by a new version of the TorqShift six-speed automatic transmission that gets its own set of gear ratios instead of having to share the same ones with the diesel. We drove a truck with that engine briefly on an off-road course, so no real insights to share other than it felt plenty responsive in the low end.

Ford's 6.7-liter Power Stroke diesel receives more attention for this new generation because big trucks need big numbers. Power stands pat at 440 hp, while torque is up to 925 lb-ft from 860. That beats the Ram, on paper anyway, as its Cummins was the record-holder at 900 lb-ft. Torque is limited in the first few gears to allow the truck to make forward progress without shredding its tires. While 860 lb-ft was probably enough, 925 is definitely enough. The truck accelerates with authority with no load and pulls confidently with something in the bed or a trailer hitched behind. That doesn't mean the truck makers won't keep aiming for the magic 1,000-lb-ft mark. 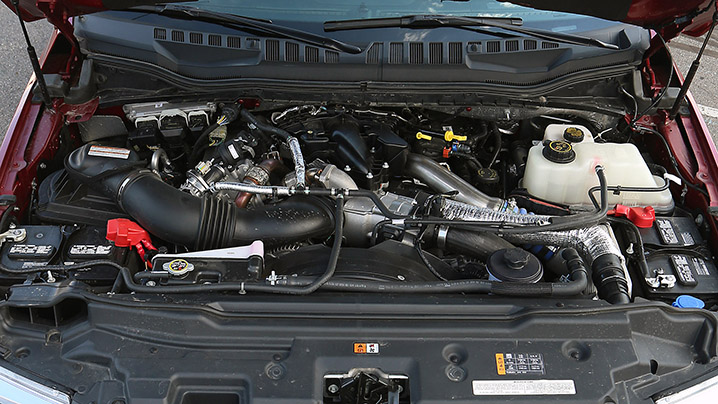 Big trucks don't need big noise, at least as far as Ford is concerned. You get a definite diesel sound from the Power Stroke but the clatter and stress are kept out of the cabin. Diesels from the competitors have more of a big-rig tone to them, while the Ford's is decidedly polite. People opting for a fancy King Ranch or Platinum truck will appreciate that, but we don't mind some reassurance that the engine is working hard for us.

Ford made a lot of changes to the Super Duty frame, adding more crossmembers and welding larger portions of them, enlarging the cross section of the mid-rail, and using mostly high-strength steel, pretty much all of which upped weight. The result is palpable stiffness but not to the point of discomfort. It's more confidence-inspiring and not as gelatinous as other big trucks can be. You feel the bumps, sure, but only once – no reverb. There's no bucking with unloaded trucks and not too much squat on those all loaded down. There are no gimmicks when it comes to the suspension, just big springs and coils with shocks that are well-tuned for the weight. 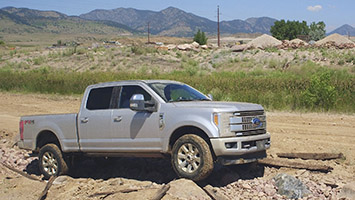 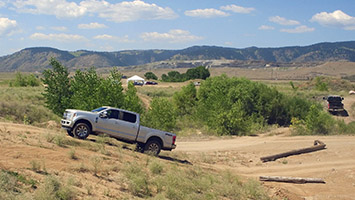 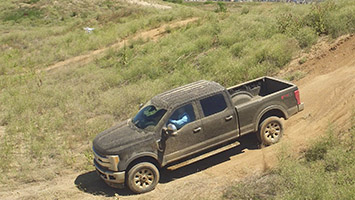 The 2017 Super Duty is plenty comfortable on the road, and many of the new options are aimed at making truck life easier. Seven cameras are available – six that show you views over, around, and behind the truck and trailer, and one that provides lane-departure warning. Once you have your trailer dimensions set in the truck, it will extend the blind-spot monitoring the length of what you're towing so the feature is still useful. There's also a Trailer Reverse Guidance system that uses the cameras to help back a trailer and also tell the driver where to put the steering wheel to get everything to back up straight (but, again, no steering help to go with like the F-150's Pro Trailer Backup Assist since that requires electric-assist power steering). All of this stuff works nicely and would be a boon for a novice tower. Do traditional truck buyers want all that tech, though? Isn't the ability to back a trailer with your arm out the window and neck craned still worth something? We walk through the camera locations, their various views, the Trailer Reverse Guidance system, and the new safety tech in the video playlist below so you can decide for yourself.

As to the towing itself, we got behind the wheel of an F-350 Power Stroke with a 10,000-pound trailer and at certain points in the drive forgot there was anything behind the truck. That's always a good sign – just don't forget it's there completely. Ford also let us ride along in an F-450 towing a 30,000-pound gooseneck trailer, and while that one always felt like it was pulling something, it never seemed taxed, even on a decent grade. The adaptive cruise control was able to keep up well, modulating the throttle, mechanical brakes, engine brake, and trailer-brake controller to keep everything comfortable up and down hills. Few will probably use all of that capability, but it's always nice to know it's there and that the truck doesn't feel taxed even at its limits. 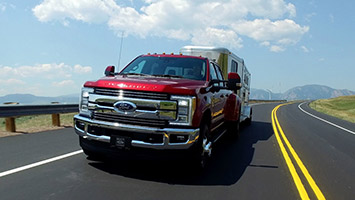 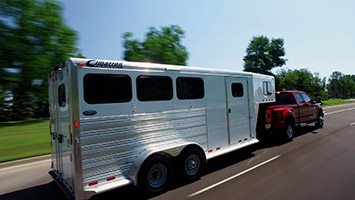 So the 2017 Super Duty is the best all-around package in the heavy-duty pickup segment, but why shouldn't it be? The newest entry always takes the glory, inching up the output numbers, tow ratings, and payload capacities in the name of one-upsmanship. The wide array of thoughtful tech features will give the marketing people something to focus on too, and most actually make driving the truck a better experience. We'll see updates from GM soon and some from Ram will follow. For now, though, the Super Duty is the king of the hill. Just make sure the hill you're parking it on is big enough. 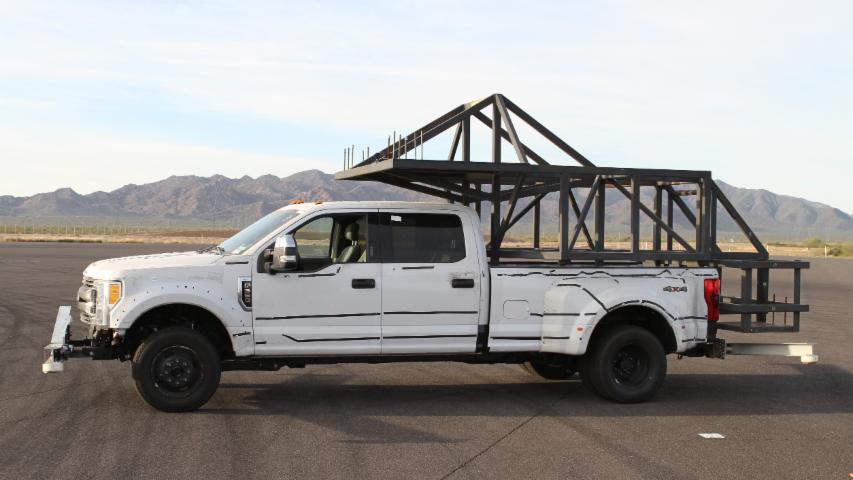