Greg Migliore
Mercedes-Benz is bullish on autonomous bus technology, and today it revealed the Future Bus with CityPilot, a landmark vehicle capable of driving itself more than 12 miles in an urban environment. The bus is Mercedes' vision for public transportation in the future and uses cameras, radar, and connected data to drive itself.

CityPilot advances the technology used for Highway Pilot, which was shown on a Mercedes work truck two years ago. The city version is designed to navigate busy areas with lots of people, and it can recognize traffic lights – and communicate with them – and people, obstacles, and other potential things a bus would encounter during urban driving. The bus also can navigate tunnels, brake on its own, and can automatically open and close its doors. It has a top speed of 43.5 miles per hour.

As evidence, Mercedes operated the bus autonomously in the Netherlands. It completed the bus rapid transit route from Schiphol airport in Amsterdam to a town called Haarlem, a nearly 12-mile drive with bends, tunnels, and traffic lights. Mercedes says the driver only needs to take control when the bus faces oncoming traffic, in line with local laws, and does not need to intervene in any way, though the human pilot remains in place at all times.

The Future Bus is based on Mercedes' Citaro bus, which measures 39.4 feet and is widely used in cities around the world. The Future Bus' interior has an open layout designed to conjure images of parks and open spaces. It has designer seats, grab rails that look like trees, and a canopy-style roof. There are three areas based on the passengers' time on the bus.

A spokesperson said the bus is a technological demonstration and not planned for public use, though its systems could be used in production. She wouldn't comment on US implications. The Future Bus will be on display in September at the IAA Commercial Vehicles show in Germany. "These features of the Mercedes-Benz Future Bus will be tested, optimized, and brought to series readiness throughout the next years in order to introduce them in our series vehicles in the near future," she said. 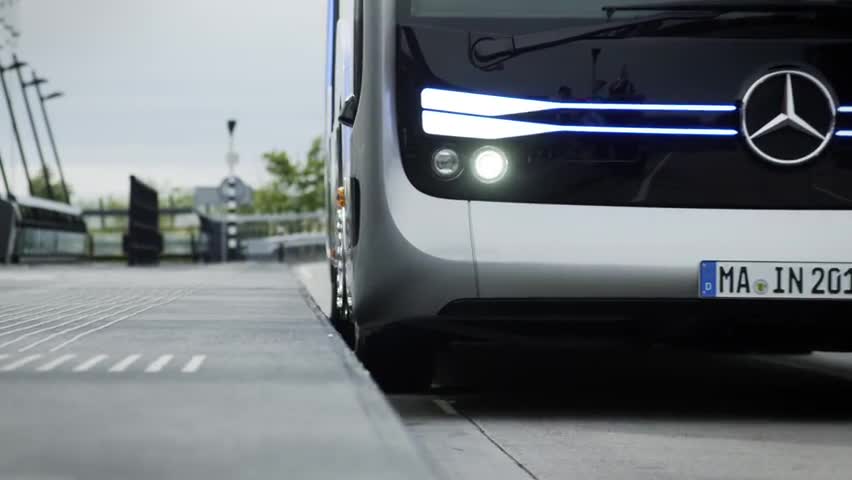