View All Specs
Godzilla was never known for his manners. Loud, insistent, and violently quick, the Nissan GT-R's fundamental appeal stemmed from its ability to slaughter the six-figure competition with its relentlessly focused forward motion. But as icons age, they sometimes evolve. Case in point: the 2017 Nissan GT-R.

Haters bemoan the GT-R's clinical and uninvolving quality, but their high-minded critiques should be taken with a grain of salt. Nissan's flagship sports car has been both heavy-fisted and enthralling, with an appetite for asphalt only matched by its unrepentantly harsh ride and acoustics.

For 2017, Nissan made what it claims are the biggest changes to the GT-R since its introduction nine years ago. Power is boosted from 545 to 565 horsepower, and torque gains four clicks to 467 lb-ft, thanks to increased boost and an ignition timing system inherited from the previous Nismo version – but don't let its slightly tweaked numbers fool you. The torque spread is more linear and combines with refinements to the 6-speed dual-clutch transmission to deliver power more smoothly. A new titanium exhaust system helps dissipate heat more efficiently (along with a 20-percent larger grille, whose increased drag is counteracted by various aerodynamic tweaks throughout the body). 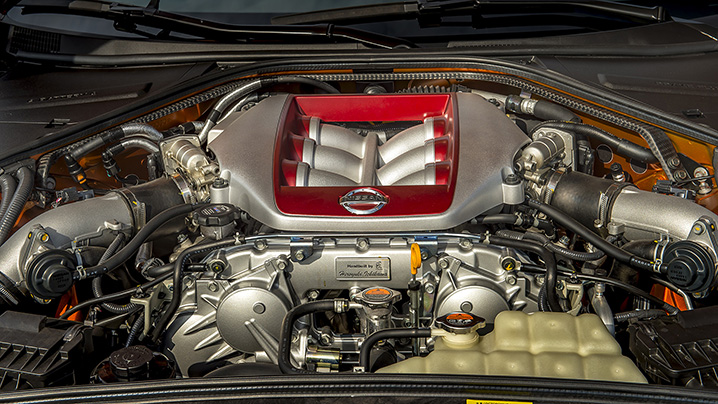 But here's where the GT-R really matures: the cabin is a much quieter place. Nissan capitalized on the active noise canceling technology introduced to the 2015 model, and then added insulation, an acoustic windshield, and various noise deadening techniques. Aiding the racket-reduction effort is an exhaust valve that works with active noise cancellation to eliminate booming engine sounds.

Hate to wake the neighbors? A discreetly positioned button below the dash enables engine startups that are 10 decibels quieter. And speaking of controls, the center stack has been cleaned up with a reduction in buttons from 27 to 11. The instrument panel drops for greater outward visibility, and the formerly fixed paddle shifters are now mounted to the steering wheel, thanks to feedback from current GT-R owners. The clicking action has also been improved for more positive feel.

Ride and handling were enhanced thanks to a stiffer windshield frame and lighter RAYS wheels, which work with the revised shocks to enhance compliance. Though damping rates remain the same, reduced frictional losses and softer settings allow the Bilstein shocks to offer a smoother ride quality in R and Comfort modes. Nissan says the chassis mods not only soften ride, but increase grip as well, yielding four-percent faster slalom times. 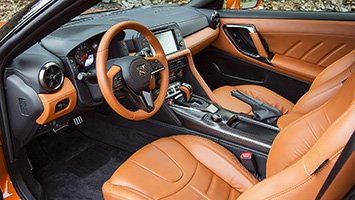 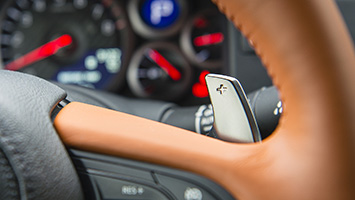 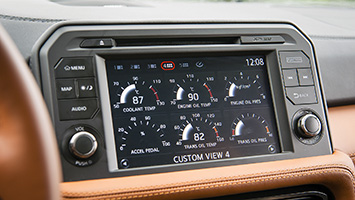 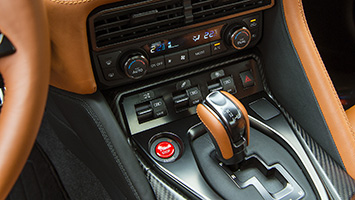 Flip the switchblade door handle and climb inside, and the new GT-R's leather-lined interior feels appreciably more premium than its predecessor. Between the cleaned-up center stack and the larger 8-inch multimedia touchscreen, the GT-R's controls are incrementally more sophisticated and balanced. Equally important are small touches like the reduced padding beneath the Nappa leather on the dashboard, which makes the GT-R feel less like a Romper Room-themed sanitarium and more like a mature grand touring car. Settle into the seats, which are slightly wider and cushier, and the impression deepens.

But the most crucial changes are how disarmingly civilized the GT-R has become at speed. At highway velocities the cabin is quiet enough to hold a conversation that would have previously been overcome by transmission whine, tire noise, and engine boom. Once I marveled over the reformed road manners, we exited downtown Dusseldorf, slowed to a stop, dropped to first, and mashed the pedal. The GT-R claws into earth and lurches forward with breathtaking speed, which initiates a stunning crescendo as the analog tach approaches the 3,000 rpm mark. There's a squirty-yet-progressive feeling to the proceedings: when the turbos spool the seat-squishing begins. Acceleration is accompanied by more modulated sounds, thanks to electronic enhancements which smooth out the naturally-occurring unevenness in frequencies. This time around, there's less exhaust and more induction whoosh, topped off with a subtle note of turbine whir. 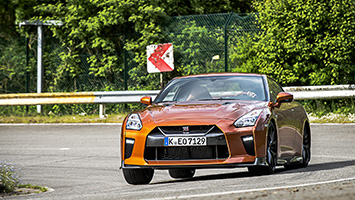 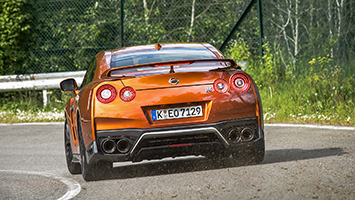 Mechanical grip on dry secondary roads is high, and the ride quality has improved considerably. Though there's a tight, buttoned-down connection to the road from the 255mm front tires, steering feel still lags behind benchmarks like the Porsche 911 Carrera, despite a hydraulic setup. Shift action from the 6-speed is reasonably quick, though this 'box doesn't isn't quite as nimble as the latest/greatest dual-clutches on the market.

It feels natural to expect a 7 th or 8 th (or even 9 th) gear in the GT-R, primarily because speed accumulates so quickly it becomes difficult to acclimate to the elevated velocities. "Revs seem awfully high," I thought to myself several times while accelerating to what seemed like a reasonable pace, only to realize I was, in fact, at triple-digit speeds. (For the record, chugging along at 60 mph yields an engine rpm of just under 2,000). On the unrestricted sections of autobahn out of Düsseldorf, the GT-R felt indomitably urgent, posting a stable indicated speed of 167 mph during our most enthusiastic stretch – which begged the question, how would it fare on the track?

Heavy rainfall and standing water are never good things at racetracks unless you enjoy the intersection of expensive hardware and Armco, but the GT-R held its own under those taxing conditions at Belgium's Spa-Francorchamps Circuit. Feed your inputs gently, and the two-ton GT-R behaves intuitively, covering (slick) ground with a predictable sense of purpose. Tip in the throttle a bit too generously though, and the GT-R's rear power bias and copious torque can send the back tires spinning in a controllable power slide. During those, uh, let's call them Yaw Experiences, my GT-R was set to the most aggressive R mode for transmission and traction/stability control. Though I braked with plenty of advanced squeeze, the 6-piston Brembo monoblocks did manage to scrub off speed effectively when called upon. 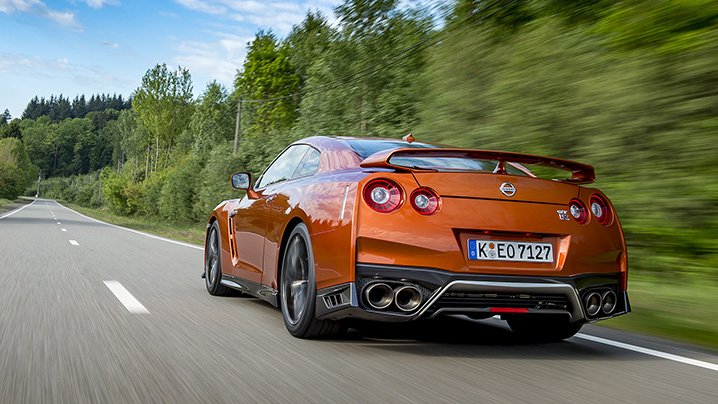 The next day's drive back to Düsseldorf revealed far more about the GT-R's character thanks to dry conditions and a few open stretches. First off, launch control is easy to engage (switch traction and gearbox to R, press both pedals, and release the brake), and my hard launches proved repeatable and addictive — I counted six before the open road beckoned. High-speed stretches during the 2+ hour drive were comfortable and relatively well insulated (though the suspension remains on the stiff side), and the GT-R's demeanor comes across as significantly more livable.

The old GT-R, though endearingly capable, was sufficiently rough around the edges that an asterisk of conditionality hovered over its otherwise awesome performance. It's taken nearly a decade, but Nissan's flagship has finally grown into a well-rounded road car that can be rightfully cross-shopped against stalwarts like the Audi R8, Chevrolet Corvette, and Porsche 911.

While the Nissan GT-R's old image as a boorish brute may be difficult to shed, this latest round of improvements suggest that Godzilla can finally run with the big boys and expand its repertoire beyond melting faces and annihilating the quarter mile. Though its capabilities are accompanied by a fatter MSRP, the GT-R still packs a punch that far outweighs its sticker price.