Deserts are no match for the Ford F-150 Raptor

Brandon Turkus
Was there ever any doubt that the new Ford F-150 Raptor would be absolutely unstoppable when presented with dust, dirt, sand, or rock? No? Well, apparently Ford thought there would be, because it's just released a video of its new Raptor monstering dusty dunes and trails.

It's not a subtle video, but then again, the Raptor isn't a subtle truck. It's basically just the SuperCab version of the truck bounding about looking like a certifiable badass as it beats the desert into submission. The gratuitous slow-motion shots – actually, all the shots – show the suspension at work, coping effortlessly with the territory. It all looks like a very, very fun time.

But what we really enjoyed was the very small amount of rock crawling that was shown. We know the Raptor can cross a dune at 87 miles per hour without breaking a sweat, but it's kind of like seeing a fish out of water watching the F-150 do some low-speed off-road work. It looks good, but more importantly, it still doesn't look like it's being challenged. 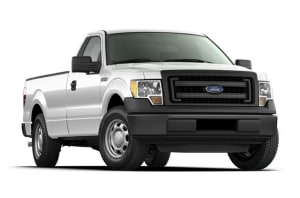