Steven J. Ewing
A brand-new Fiat 500L will run you anywhere from about $20,000 to $25,000, depending on trim. But the one you see here just sold for $82,000 – more than four times the car's base MSRP. This isn't just any old 500L, though. This one carried Pope Francis through Philadelphia on his recent visit to the United States.

The 500L sold at an auction during the Philadelphia Auto Show, where bidders could participate remotely, or in person. Nineteen bidders competed over the course of 11 minutes, and the winning bid of $82,000 was made by Michael and Kate Chapman of Chapman Auto Stores. Reuters ( via Automotive News) says the money will go to benefit the Roman Catholic Archdiocese of Philadelphia.

This 500L was one of six the Pope used during his visit to the US. Automotive News says the Pope originally selected the Fiat because it's frugal and efficient, and that Francis wanted to move away from some of the lavish appointments long associated with his office. 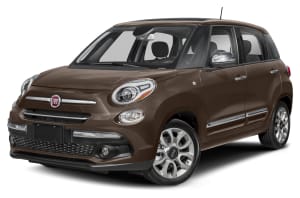