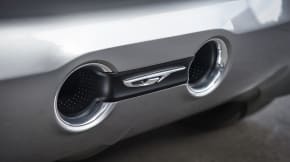 Opel and Vauxhall continue to make CEO Dr. Karl-Thomas Neumann look nefarious in teasers for the upcoming GT concept at the 2016 Geneva Motor Show. The divisions' boss trades his Terminator-like red eye from the first video for a Bond villain swagger in the latest one, but we also get a tiny glimpse at the vehicle's design.

The dark lighting only lets us see the front fender and headlight, but it's clear that the new GT has a low-slung, pointed nose. A teaser shot also shows the double exhausts with the model's logo in between them. Opel and Vauxhall promise that the new design is quite modern rather than a retro revival of the original GT. However, the company is willing to include some old school touches because the red tires on the concept are a callback to the rubber on the 1928 Opel Motoclub 500 motorcycle.

The original Opel GT of the late '60s was a stylish little sports coupe, and its combination of a curvaceous body and pop-up headlights made the car look like the C3 Corvette's little brother. The name returned in the 2000s as a European version of the Saturn Sky. We're curious what Opel might have in store for the model's revival this time.
Show full PR text
VAUXHALL REVEALS FIRST GLIMPSE OF GT CONCEPT

Luton/Rüsselsheim – In an enticing prelude to the Geneva Show premiere of Vauxhall's GT Concept, the company has released a second film that reveals more of the car's design.

In the clip, Dr. Karl-Thomas Neumann, CEO of Vauxhall and Opel, opens a door to show the front of the purebred GT Concept, with the words: 'Don't miss what happens next.'

Accompanying the film is an image of the GT Concept's central double exhaust, and while the car's design is in no way 'retro', the feature was a highlight of ground-breaking concept cars from both Vauxhall and sister brand Opel in the mid-1960s. Vauxhall presented the XVR at the Geneva Show in 1966, and Opel the Experimental GT at Frankfurt the year before. Both were ultra-modern, minimalistic and uncompromising, with a sculptural shape – a philosophy which also defines the design of the new GT Concept.

As for the GT Concept's red tyre, seen briefly in this latest film, it pays homage in an avant-garde way to the Motoclub 500, a futuristic Opel motorcycle from 1928 that wore red rubber*.

*The MotoClub 500 was a production bike, rather than a concept