These are the safest cars for 2016

Pete Bigelow
Looking over the list of four-dozen vehicles that earned the highest-possible safety ranking from the Insurance Institute for Highway Safety this year, there's one noticeable omission: Cars built by American manufacturers. IIHS officials released the results of their annual rankings this morning, and there's only one car from Detroit's Big Three among the ones bestowed with a Top Safety Pick+ rating, a designation that influential among car shoppers. The Chrysler 200 was the lone representative from the traditional domestic manufacturers among the top 48 vehicles. (Certain models of the Fiat 500X, manufactured by Fiat Chrysler Automobiles, also made the list of elites).


The Chrysler 200 was the lone representative from the traditional domestic manufacturers among the top 48 vehicles.

Asian manufacturers dominated the list, with Toyota claiming nine spots, including the best-selling Camry sedan. Honda finished one behind with eight and Subaru had six.

Those manufacturers have been quicker to adopt crash-prevention technology, and that may have prevented traditional manufacturers from a better showing. The IIHS toughened its standards for the elite ranking this year, mandating the Top Safety Pick+ cars earn "good" ratings on all crash tests and come equipped with a front crash-avoidance system with autobrake capabilities. Previously, the best cars could score an "acceptable" rating on the small-front overlap crash test and still earn the top honor.

"We asked auto manufacturers to do more this year to qualify for our safety awards, and they delivered," said Adrian Lund, IIHS president.

The stricter criteria may have thwarted some previous winners. Four previous Top Safety Pick+ winners didn't qualify this year, nor did more than 20 winners of the second-best Top Safety Pick, under which they needed at least a "basic" crash-prevention system this year.

IIHS started adding the crash-prevention requirements for 2014 testing, changes that reflected just how much the auto industry has shifted its safety focus from making cars that can withstand crashes to making ones that can avoid them. The 48 winners have "superior" or "advanced" rated front crash-prevention systems with automatic braking, according to IIHS.

These vehicles must stop or slow down without driver intervention before hitting a target in tests (pictured below) conducted at 12 and 25 miles per hour. Cars that contain a more basic prevention system that only issues a warning don't qualify for the Top Safety Pick+ award, but are eligible for the second-best Top Safety Pick designation. Thirteen models were awarded that status this year. 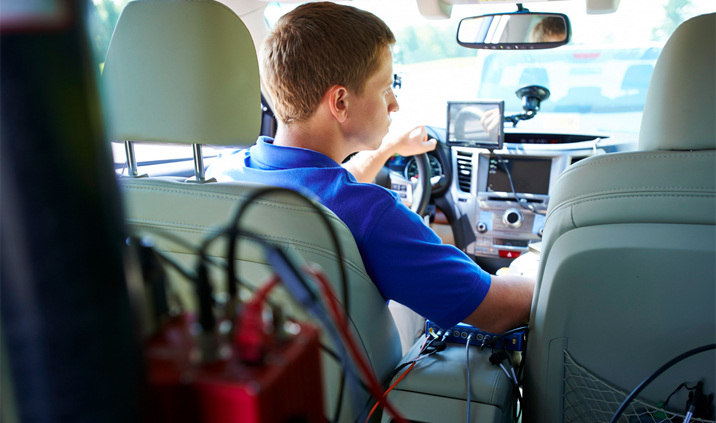 More automakers are expected to make autobrake systems standard equipment under a voluntary agreement that 10 manufacturers reached earlier this year.

More automakers are expected to make autobrake systems standard equipment under a voluntary agreement that 10 manufacturers reached earlier this year. But if there's anything eye-opening on the list of 48 winners, it's how quickly the technology has already spread from luxury cars toward more mainstream brands. For example, the Scion iA has a base price of $16,000 and comes with a standard autobrake system.

"Ask for autobrake and forward collision warning features when you're out shopping for a new vehicle," Lund said. "Look for good ratings in IIHS evaluations and at least four of five stars from NHTSA. And remember that larger, heavier vehicles offer the best protection in a crash." Other affordable cars that contain crash-avoidance systems to earn Top Safety Pick+ include the Hyundai Tucson, Mazda3, Mitsubishi Outlander, and Nissan Maxima.

In the case of small SUVs, the most popular car segment among car shoppers this year, the Honda CR-V, Mazda CX-5, Subaru Forester, and Toyota RAV4 are among the safest cars on the road (in addition to the Tucson and Outlander). The 500X earned top honors only for cars manufactured after July 2015.

Among midsize sedans, another popular buying segment, the Honda Accord, Mazda6, Subaru Legacy, Volkswagen Jetta, and Passat picked up the Top Safety Pick+ honors, along with the Camry and Chrysler 200. Find the full list of winners here.
X