Chris Bruce
The Hyundai Tucson Fuel Cell certainly isn't a hydrogen-powered speed demon like the Buckeye Bullet, but the South Korean company's H2-fueled crossover is fast enough to hold its own land speed record. How many SUVs can claim that? Not too many, but that's because there simply aren't many hydrogen-powered vehicles around, let alone SUVs.

Hyundai recently took a 2016 Tucson Fuel Cell to the Soggy Dry Lake Bed in California, and the efficient model claimed a new land speed record for a production hydrogen-powered SUV. Set to the always stirring Ride of the Valkyries, the automaker's video shows the Tucson whispering through the desert while leaving only a cloud of dust and drips of water behind. Rather than spoiling it, you need to watch the clip to find out just how fast the fuel cell-powered Tuscon can go.

The Tucson uses its fuel cell stack to power to spin the front wheels with an electric motor that makes 134 horsepower and 221 pound-feet of torque. They are currently available to lease in Southern California, and the company delivered about 70 of them in the first year. 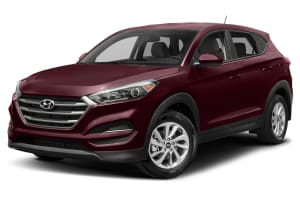