SEMA wouldn't be SEMA without Toyota Racing Development, and its bringing five new concepts to showcase at the tuner expo this week.

The TRD-customized show cars include unique takes on the Avalon, Camry, Corolla, Highlander, and Land Cruiser. Each of them is decked out in the same shade of silver and features custom TRD embroidery inside. 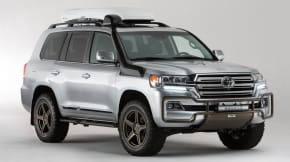 The 2015 Toyota Avalon XLE Touring features a suspension dropped by 1.5 inches at both ends, plus new struts, free-flowing dual exhaust with quad tips, and 19-inch wheels. The Camry XSE V6 has a dropped suspension (by one inch up front, 1.5 at the back), riding on 21-inch wheels, with new struts, brake pads, and exhaust system. TRD swapped out the CVT in the Corolla LE Eco for a six-speed manual, and gave it a new exhaust as well as 19-inch wheels and a suspension dropped by the same amount as the Camry's.

The Highlander features the most comprehensively revised interior, and rides on 20-inch wheels and a similarly dropped suspension. Conversely, the Land Cruiser has been jacked up by two inches up front and fitted with an underbody skid plate. It's also got remote-reservoir coilover shocks, a snorkel air intake, brush guard with LED lights, tubular running boards, roof rack, cat-back exhaust, and 20-inch wheels. Toyota is actively seeking out public opinion on these five demonstrators, the implication being that if any (or even all) of them are well received, the company could put offer them at your local dealership.

The five SEMA Edition TRD vehicles—representing a cross-section of five of Toyota's most popular sedans, SUVs and crossovers—have been modified for sportier good looks and more responsive handling. The quintet is comprised of a SEMA Edition TRD Avalon, Camry, Corolla, Highlander and Land Cruiser.

All of the SEMA Edition TRD concepts feature special edition Silver Pearl paint on the exterior and custom TRD embroidery inside. In addition, all but the Land Cruiser sport a front chin spoiler, aero-inspired rocker panels and rear-end diffuser treatment.

Just as each model plays a different role in the Toyota lineup, each of the SEMA Edition TRD vehicles boasts unique modifications designed to enhance its sporty looks and driving dynamics.

For 20 years, the Toyota Avalon has set the benchmark for the premium midsize sedan category. Toyota's flagship sedan features an elegant yet athletic exterior design, dynamic performance, and a high level of refinement and technology. The Avalon has proven popular with drivers and passengers alike, allowing them to go places in style and comfort.

Based on the production 2015 Avalon XLE Touring, the SEMA Edition TRD Avalon builds on this winning formula with TRD lowering springs that reduce the vehicle's ride height by 1.5 inches both front and rear, TRD performance-tuned struts all around, TRD custom free-flow cat-back performance dual exhaust with quad tips, and TRD decklid badging.

The best-selling car in America for the last 13 years was redesigned for 2015 with a bold new look, stiffer body structure, enhanced aerodynamics and its quietest ride ever.

Using the 2015 Camry XSE V6 as a canvas, the artists at TRD used TRD lowering springs to lower the vehicle by 1 inch up front and 1.5 inches in back, for better aerodynamics, improved traction and handling, and a more aggressive stance. Both the look and the handling are enhanced by 21×9.5-inch bronze TRD performance wheels surrounded by 255/35/21 tires.

The 2016 Corolla LE Eco is the MPG champ of the line, but it's also a strong performer with the highest-powered engine of any Corolla, delivering eight more horsepower than the other models. That made it the ideal candidate for a SEMA Edition TRD makeover.

The production Corolla LE Eco puts that power to the pavement through a continuously variable transmission. In the SEMA Edition TRD Corolla, the CVT is replaced by a TRD six-speed manual, for a sportier driving experience. Performance is further enhanced by a TRD custom free-flow cat-back single exhaust system.

Adding to the driving fun are 255/30/19 tires and bronze 19×9-inch TRD performance wheels. The SEMA Edition TRD Corolla hugs the road with a ride height that's 1 inch lower in front and 1.5 inches lower in the rear than the production Corolla.

The Toyota Highlander started the midsize crossover SUV category 15 years ago, so it had a head start on becoming a benchmark. The SEMA Edition TRD Highlander raises the bar even higher, with the most significant interior upgrades of any of the SEMA Edition TRD concepts. In addition to TRD seats, the cabin of the concept Highlander has been completely redone in dramatic full black with red accents, from dash panel to door panels.

The Highlander's stock tires and wheels were replaced by 285/35/20 tires and 20×10-inch bronze TRD performance wheels front and rear.

With a ride height that's 1 inch lower up front and 1.5 inches in back, the SEMA Edition TRD Highland is the crossover that crosses the line from popular people-hauler to stealth SUV.

Toyota has sold Land Cruiser models in the United States continually since 1957. Over the last nearly 60 years, the Land Cruiser has evolved from a utilitarian go-anywhere vehicle to one of the most luxurious full-capability SUVs on the market. The SEMA Edition TRD Land Cruiser, based on the redesigned 2016 model, takes this iconic Toyota to new heights—literally.

While the rear of the SEMA Edition TRD Land Cruiser is at stock ride height, the front end has been raised a full two inches, for even more impressive ground clearance and angle of approach. A TRD skid plate protects the underbody of the vehicle.

Exterior details of the concept vehicle serve both style and substance. They include a TRD brush guard with LED driving lights; a TRD performance off-road air snorkel; bronze-colored TRD tubular running boards; and a roof-mounted cargo pod. In back, the TRD performance cat-back dual-tip exhaust features an innovative offset design that's as smart as it is functional.

TRD staff will be on hand at the Toyota display—and at the nearby TRD trailer, adjacent to the Toyota booth on the Patio Annex—throughout the run of the 2015 SEMA Show, asking journalists and visitors their opinions of the concept vehicles.

"The Toyota Avalon, Camry, Corolla, Highlander and Land Cruiser already do everything that
vehicles in their respective segments need to do, and do them exceedingly well," said Appelbaum. "We believe the SEMA Edition TRD versions of these vehicles will appeal to a crowd that needs a great all-around vehicle plus even more sportiness. We're anxious to gauge public response to these concepts."

The SEMA Edition TRD vehicles—along with numerous other Toyota specialty vehicles—will be found in the Toyota display booth (#24700) in Central Hall and on the Patio Annex of the Las Vegas Convention Center, November 3-6, 2015.