You can watch the video above or read a transcript below. And don't forget to watch more Autoblog videos at /videos.
Show full video transcript text
Hey, all. This is Seyth, and I'm behind the wheel of a 2016 Nissan 370Z. That's right, the Nissan 370Z is still for sale in the 2016 model year. It would be lying to say that this car is anything but old in the tooth. It's been around since around 2009 and it has been updated since then but not dramatically, so it's still essentially the same car. The version that I'm in is really the essential version of the same car. This is a base, base model. It's right around $30,000. The only options are for floor mats, which are $125, meaning you're getting the Z at its most distilled.

For this car that means that it's still using the 3.7-liter naturally aspirated V6 engine. It's making 332 horsepower and 275 pound-feet of torque, figures which feel about seven years old. It's made it up to a six-speed manual transmission that does not have Nissan's SynchroRev Match technology on it. This is a nice, steady, short throw gearbox. It feels a little bit notchy if you're going really fast. Not the smoothest in the world but it really gets the job done. Even over the last couple days of driving, I've really grown to like it.

Now what Nissan delivers with this car is a really pure-feeling sports car experience. It's not that heavy. It's about 33, 3,400 pounds, which makes it a few hundred lighter than a Mustang. It's a little bit heavier than the BRZ, FRS twins, but with more power as well. The steering is hydraulic power assist. It turns in really quickly and really nicely. It handles challenges of direction very well. Generally, this car on a curvy road in third gear is a really, really enjoyable thing.

Of course you're not getting a lot in terms of refinement. There are people who definitely argue that the 370Z has never been a refined sports car ever, and a lot of people point to the engine and the exhaust that they don't like. Right now I'm just cruising around at 3,500 RPMs and it's got a low hum that is neither exciting nor quiet. There's a lot of tire roar. When you really get into it, you do get a lot more drama and noise, but it's not the kind of peaked, rising, V8 note that everybody gets really into when it comes to pony cars.

Now at $30,000 and right around seven years old you are not getting a lot of creature comforts in this car. There's no nav. There's a really basic head unit. It's got a tinny-sounding stereo system. The gauge cluster feels throwback and there just aren't a lot of features. You've got cloth seats which are really nice and supportive, and I dig, but not very fancy. There's a lot of plastic in the dashboard and all around the car. Nothing feels particularly premium. It does feel purpose-driven, which I think is nice. But I would make the argument that these days, at this price, the very base car makes more sense than anything else in the 370 range.

Here's the important part. I think that this is a sports car that's got an experience that's timeless. I think that a lot of the best sports cars, new and old, make you feel about the same way. You might just be feeling it at different speeds. If this is a car that I buy to keep for a while, the trim that I'm in right now isn't going to detract from its value or fun factor 10, 20, and 30 years down the road. Why? Because if I'm not daily driving it, do I really care that it doesn't have an accurate nav system with really great graphics? No. I want the steering to feel nice and I want the engine to deliver power when I ask it to. Woo! Yeah. It's still fun. That's going to be fun in 50 years, frankly. Anyways, thanks for coming along with me, guys, on this lovely Sunday drive. For Autoblog, I'm Seyth Miersma. 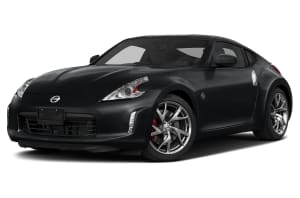