Donald Trump's Lamborghini Diablo is up for sale

Noah Joseph
Back in Donald Trump's booming heyday, a car couldn't get much flashier, much more outlandish, much more... Trump than a Lamborghini Diablo. Turns out he actually owned one – a 1997 Lamborghini Diablo VT roadster, to be specific, like the one pictured above. And now it's up for sale. 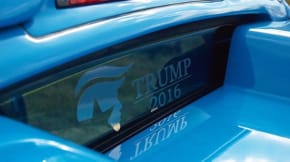 This VT roadster is one of just 200 or so that were made before the 1999 facelift. It featured the Viscous Traction (viscous-fluid coupling) all-wheel drive system that debuted on the Diablo VT, and the carbon-fiber roof panel could be removed and stowed over the engine cover. Short of the Ferrari 575M Superamerica with the Fioravanti-designed flip-top, we could hardly imagine a more fitting set of wheels for the mogul.

Bear in mind that the Diablo was developed when the company was owned by Chrysler – which would not, of course, prove the last time Chrysler would be in bed with an Italian automaker. This one was built after the brand was sold to a Malaysian company (before it was absorbed into the Volkswagen Group). And in those days, Lamborghini was closely allied with US-based supercar manufacturer Vector Motors. The Diablo was about as American as an Italian supercar could be.

Trump's is finished in French Racing Blue and appears to be in pristine condition. It's now been adorned with Trump stickers, seemingly well-documented as having belonged to Trump himself, and formerly registered in Palm Beach, FL. It's being sold by one Michael Digonis in New York via The Drive, who is asking $299,000 for it. That is a lot, but considering the celebrity provenance it could prove a sound investment – especially if Trump wins the Republican nomination and the general election next year. 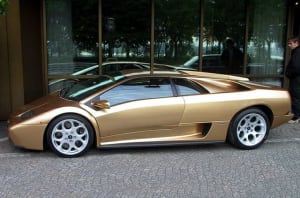