Audi A4 preps to go Allroad Audi recently unveiled the lighter, larger, and sleeker 2017 A4, but the sedan is just the beginning. We know that A4 Avant and Allroad wagon versions are on the way too. Only the Allroad, however, is destined for these shores. These spy shots provide an early idea of what to expect for American buyers who prefer a longer roof and more room to haul in the back.

A few key details distinguish this Allroad from the standard Avant, including the elevated ride height. Also, look carefully at the front three-quarters shot, and you can also pick out the more pronounced fender flares. Audi's designers made slight adjustments to the air dam, especially below the headlights, and there are some smaller tweaks to the rear bumper, as well.

The Allroad's debut is expected to be staggered from the sedan and Avant versions, and the company obviously isn't talking about power yet. The only powertrains divulged for the 2017 A4 in the US are either a revised 2.0-liter TFSI or a 2.0-liter TDI diesel. Regardless of engine, all-wheel drive would certainly be standard to fit the more rugged version's styling. 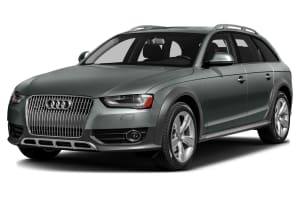