Bimmer Today reports that the German rag Auto Zeitung ran an Audi RS3 and a BMW X6 M around the Nürburgring together, and the hotted-up sports activity vehicle came in just five seconds behind the white-hot hatch. Driven by 'Ring regular Horst von Saurma, the RS3 ran its lap in 8 minutes, 15 seconds, and the X6 M ran an 8:20.

If those times are accurate, that makes the X6 M the second fastest production SUV on the lap-time list according to Wikipedia: ahead of it is the 550-hp Range Rover Sport SVR, which ran a time of 8:14. That time puts BMW's 575-horsepower, 5,200-pound SUV four seconds ahead of the time registered by the last-gen, 555-hp X6 M, and well ahead of the Porsche Cayenne Turbo S that Sport Auto clocked an 8:34 with.

It would not, however, match the predictions that X6 M project manager Herbert Bayerl made for it in an interview with Sport Auto earlier this year. Bayerl said "The new BMW X6 M moves at the level of M3," speaking of the E92 BMW M3 that Sport Auto ran around the 'Ring in 8:05. It is, though, two seconds faster than the E46 M3, which lapped in 8:22. Bayerl called out the Range Rover Sport SVR directly, saying, "We have been traveling much faster in testing and have undercut the time of Range Rover several times," and "We don't need any special attachments to go faster."

Auto Zeitung's report on the lap is only for subscribers so we'll have to wait for more official news. For the apples-to-apples comparison we'll be looking forward to Sport Auto's hot lap, then we'll know if the Range Rover has anything to fear. 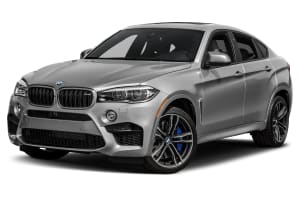