"There's still a couple hundred rpm left," coaxes the voice from the passenger seat. Though I'm wailing down a mercilessly knotted up Southern California canyon road in someone else's half-million dollar coupe, my manic pace apparently isn't sufficient for the Singer Vehicle Design rep in the right seat.

On one hand, my Irish co-pilot with more than a passing resemblance to Bruce Willis is playfully ribbing me because I've been driving hard, but haven't yet hit the 4.0-liter engine's 7,200-rpm rev limiter. On the other hand, if you've never heard of an Irish bloke who doesn't drink because he's got control issues – well, now you have, because the dude's stocky paws are white knuckling the car's rain gutter like his life depends on it. Within my microcosm of itinerant auto writing some days are odder than others; this particular Monday is beginning to look like one of the weirder ones.

The car in question, according to a release I've signed prior to the drive, is a " Porsche 911," a " Porsche," or a "911," but certainly not a "Singer Porsche," a "Singer 911," or any number of variants thereafter. Sigh. I suppose "Porsche 911 reimagined by Singer Vehicle Design" will suffice? Oh, legal department.

Nomenclature aside, what started life as a 1990 Porsche 911 has been dismantled and rebodied with a carbon fiber skin that makes it more closely resemble a small-bumpered, wide-hipped 1960s-era 911 than it does its melted bumper donor car. According to company founder (and former Catherine Wheel vocalist) Rob Dickinson, the decision to source a 964-series 911 was based on its delicate foothold between the model's combination of heritage and drivability. "I think the 964 is in the sweet spot of having one foot in old school 911 thinking with the [semi-trailing] rear suspension, which honors every earlier 911, while having a front end which is very much of the modern era and allows the car not to feel like an antique," he tells Autoblog. 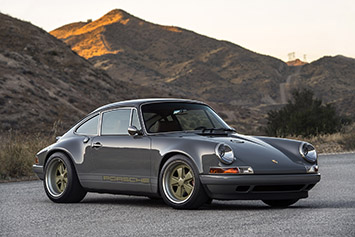 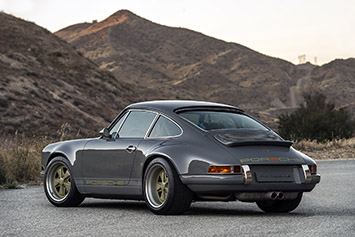 The specimen I'm driving is the latest evolution of Singer's vision of the reinterpreted 911, distinguished by a 4.0-liter powerplant that's been heavily modified by Ed Pink Racing (and, in Singer tradition, the serial number matches the donor car's chassis). The Van Nuys, California-based firm knows a thing or two about high-strung Porsche mills: the tuner has a long history of rebuilding such mechanical exotica such as 917, 935, and 962 race engines. The extensive rebuild process concludes with two to three hours of dyno testing per engine, a computer-controlled break-in process, and extensive post-build probing and inspection. The flat-six starts life as a 964 engine and is enlarged from 3.6 to 4.0 liters; everything from intake manifold and valvetrain to connecting rods and pistons have been tweaked with the intention of drawing a fatter, more usable torque curve.

"We wanted to make a giant powerband, drivability, and the sensation of power," says Ed Pink general manager Frank Honsowetz. Rather than installing a smaller oil pump to accommodate the longer stroke (a common tactic with hopped-up air-cooled Porsche engines), a robust, 996 GT3-sourced oil pump enables vigorous circulation of the gooey stuff. 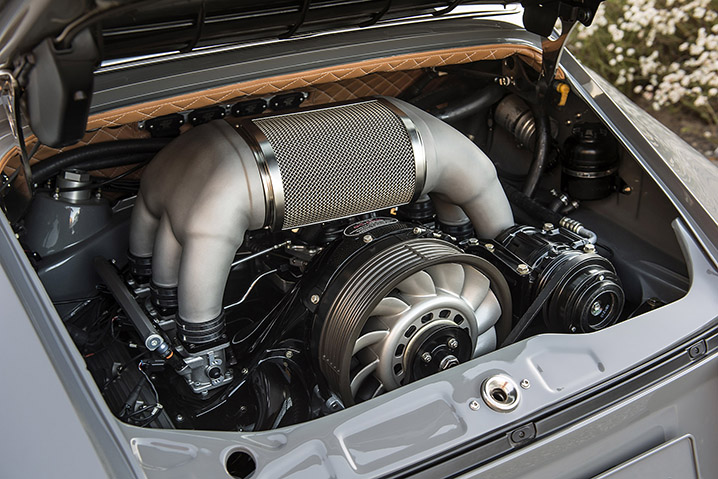 Total output is rated at 390 horsepower and 315 pound-feet of torque. Honsowetz insists the ultimate goal was feel and flexibility, not outright numbers. "We may have given up an insignificant part of peak power to gain [more usable torque throughout the powerband]," he says. A stainless steel exhaust system by Burns Stainless from Costa Mesa, CA, passes CARB standards (as well as notoriously picky requirements in places like Germany and Switzerland). Speaking of Orange County, all of Singer's suppliers are US-based, with many of them hailing from Southern California.

The 4.0-liter powerplant mates to a Getrag G50-series six-speed manual transmission optimized for shift action and clutch engagement feel. Adding a sense of preciousness to the mechanical motivation is a shroud of quilted, marine-grade leather surrounding the pristine engine, making it just as visually compelling as every other corner of this already stunning vehicle.

Other mechanical alterations include premium Öhlins TTX suspension components that have been dropped and stiffened over the stock setup. Regarding my test subject (internally referred to as the "Chicago" car for the home city of its owner), Dickinson says its chassis was tuned to the owner's personal spec. "This particular customer wanted very focused performance, but something that hadn't tipped over the compromise level and made it an unpleasant road car," says Dickinson, adding that those instructions were enacted by an unnamed chassis engineer who works at a mainstream automotive manufacturer and spends his weekends racing 911s. 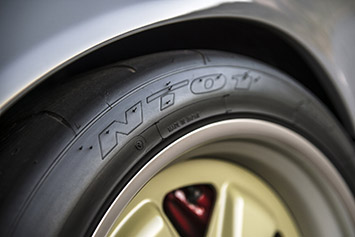 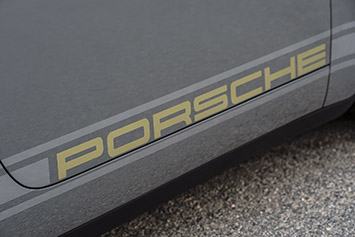 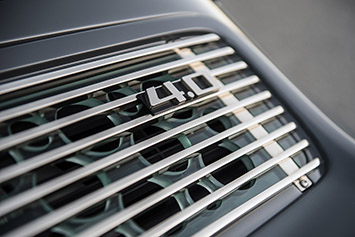 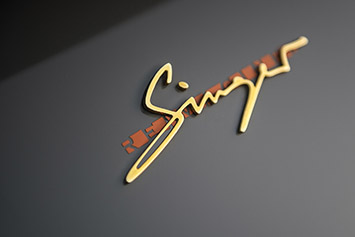 The reworked 4.0-liter engine, along with the wider rubber and nearly 400 pounds of ditched weight, enable this particular 911 to reach 60 miles per hour in only 3.3 seconds and achieve 0.93 Gs on the skidpad, as reported by the boys at Road & Track. But the numbers are almost irrelevant. Sure, the 4.0-liter churns more usable power than its smaller predecessor, but the vivid sensuality of driving this reimagined 911 far transcends the realm of performance numbers and spec sheets. Squeeze the door handle and that familiar, mechanically reassuring clink springs the pillared portal open; shut it, and a resonant clunk signals its seal. Our test subject's cockpit is a symphony of caramel colored woven leather, accented with subtle nickel-plated metal touches. Details spill seamlessly into each other, like the controls of the period-correct Becker head unit that emerge tidily from the leather dash surface; the leather door handle strap positioned at just the right height which unlatches the door with a lovely weighted click; the purposeful simplicity of the shifter, which feels like a natural extension of your right wrist. I could go on.

After a moment of soaking up the cabin, I fire up the flat-six with a left-handed turn of the ignition key, release the parking brake, and ease out the clutch. The left pedal engages near the end of its travel point with a positive grab, and the throttle responds with easy immediacy, shooting the big orange tach needle clockwise with a startling zing. Every driver contact point – the floor-mounted pedals, the leather-wrapped Momo Prototipo steering wheel, the ball-shaped shifter – feel absolutely in tune with each other and signal root of the car's mechanical purpose. As I point the half-million-dollar 911 onto Little Tujunga Road, this particular specimen's mammoth asking price starts dissolving as its athletic capabilities emerge. 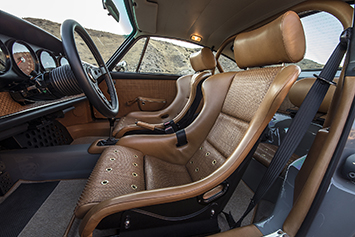 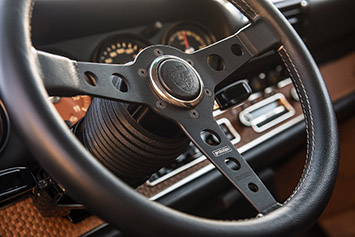 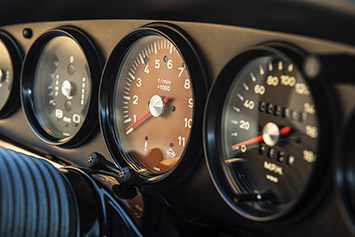 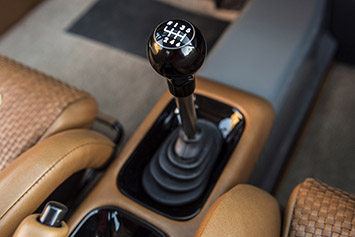 If you've ever driven an older 911, the first thing that strikes you on a canyon road (long before its famously startling tendency for snap oversteer) is the lightness of the front end and its propensity for initial understeer. There's still a hint of plowing when entering a corner hot, but (largely) thanks to the tune of the Öhlins shocks, this reworked 911 quickly digs into the corner and tracks through the curve, well past the point of initial turn-in. With that sort of psychological and visceral encouragement, it's not long before I'm driving the six-figure masterpiece like it's a rented Mustang. Undulations and ruts that would have unhinged a '90s-era Porsche with disconcerting bump steer are effectively soaked up and deflected. Credit the suspension's magic mix of preload, rebound, and premium components mated to the low unsprung weight of the 17-inch Chris Coddington wheels clad with race-ready rubber, for starters.

And then there's the sound, a throaty wail that defies the conventional bargle of the horizontally opposed six. It rises and liberates itself from the mundane with a gloriously rich song, while the camshaft's ramp profile produces an even swell of power as the orange needle climbs. And yes, that sound only sweetens towards redline, as my co-pilot's hints appear to ring true: though the tightness of the corners inhibits all-out engine revving, a touch of gearbox strategy (and a smidge of gratuitous downshifting) eventually reveals a screaming engine note whose wail is downright inspirational, crescendoing with a soft bump into the rev limiter. Yes sir, you were correct; there is an aural pot of gold at the end of that revvy rainbow. 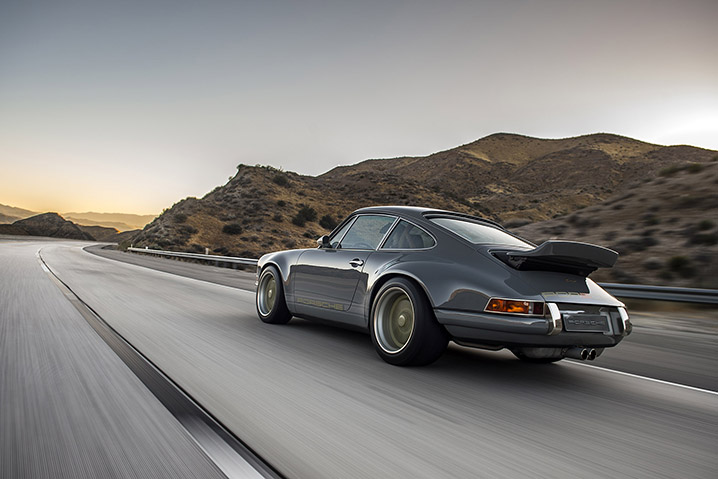 Once I focus on something other than coaxing a few extra thousand spins per minute from the honeyed six-cylinder engine, the chassis becomes a capable and thrilling conspirator in my quest for cornering speed. Despite the lunacy of jagged steering input and mid-corner throttle lifts, this 911 remains unhinged and glued down, married to tarmac in ways its throwback counterparts simply couldn't. And even though the front tires measure a 225 millimeters across, the hydraulically assisted steering conveys every last grain of asphalt passing beneath. Four-piston brake calipers bring swift slowdowns, and once decelerated, the pace is resumed again eagerly with the smooth-revving engine. Blast, brake, turn, repeat; the ritual doesn't stop until it's finally time to leave the mountain and return to the humdrum of Singer headquarters in Sun Valley, CA, as the pastoral ribbon of road recedes in the rear view.

It's hard for a Porschephile of any measure not to be moved by a drive in the Porsche 911 by Singer Vehicle Design. Nostalgic and timeless, the car manages to conjure the most evocative of Porsche characteristics while dispatching a satisfyingly modern driving experience. Transcending the arbitrary boundaries of branding, nomenclature, and performance numbers, this 911 is rear-engined nirvana of the highest order, an ode to the icon that encapsulates everything we love about the classic without getting weighed down by the drawbacks. Singer Vehicle Design has managed to translate pure Porsche lust into a car that encapsulates everything the German brand stands for, the intangibles forming an improbable alchemy which feels like magic, more emotion than engineering – and a seemingly perfect way to spend a half-mil on a very special machine.