Renault doesn't compete in the North American market, but it is a major player in South America, which is where it revealed these two new models that make us wish they'd edge northward. Introduced this weekend at the Buenos Aires Motor Show in Argentina, both of these new additions to the French automaker's Latin American portfolio are based on models sold as Dacias in other markets, enticing us with their back-to-basics appeal. 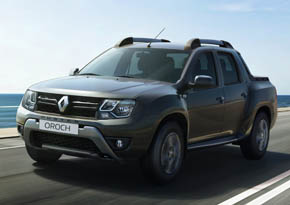 First up is the Duster Oroch, a small double-cab pickup version of the Dacia Duster designed to slot in between half-ton and one-ton trucks. The result resembles something along the lines of the VW Amarok or Honda Ridgeline, but in a compact and nimble form. It's the kind of pickup we wish we could get here – especially for those who need to move small loads around the city.

Equally as enticing is the Sandero RS 2.0. It's also based on a Dacia – this time the Sandero hatchback – but has been tuned by Renault Sport as the performance division's first product to be built outside of Europe. Power, as you might have inferred from the nameplate, comes from a 2.0 inline-four, channeling 145 horsepower and 144 pound-feet of torque through an old-school six-speed manual transmission - the likes of which you can't get in the dual-clutch Clio RS.

The Sandero RS 2.0's output means it's not in contention for outright hot-hatch supremacy (that's what the flaghship Mégane 275 Trophy-R is for, after all), but is said to be enough to propel the little pocket rocket to 62 miles per hour in 8.5 seconds and on to a top speed of 124 mph. It's also got 17-inch wheels, an enhanced interior, and sport-tuned suspension, steering, and disc brakes.

Unfortunately, the Sandero RS will be limited exclusively to Latin America – which is a bit of a shame, because it looks like it'd be a hoot to drive.

* Between June 19 and 28, Renault will be present at the 7th Buenos Aires International Motor Show with an impressive 1,800 m2 stand.
* Renault is displaying its first vehicle in the competitive pickup segment, the new Renault Duster Oroch. It will also reveal the new Renault Sandero R.S. 2.0 the first Renault Sport vehicle manufactured outside Europe.

The brand's first medium-sized pickup pushes back traditional boundaries to create a new segment in LCVs. It reflects Renault's remarkable global development and gives new emphasis to the strategic role played by markets in this region.

The formula is simple and successful: building on the experience and market success enjoyed by the Duster family worldwide, it combines the functions of a true double-cab pick-up with the space, performance and comfort of a compact and sporty SUV.

The new Renault Duster Oroch slots in between the half- ton and one-ton pick-ups. With four doors and five seats, it combines a double cab with a level of space comparable to a bigger pickup. However, it is more compact and nimble, with plenty of loading space. Based on Duster, this pick-up is ideal for combined use. It is scheduled for launch in the second half of 2015.

"This new model, Renault's first pickup, is the next step in Renault's globalization strategy. With Renault Duster Oroch, the brand is launching its offensive in the competitive pickup segment", said Ashwani Gupta, Renault's Global Head of Light Commercial Vehicles.

Designed and developed by Renault Sport exclusively for Latin America, Renault Sandero R.S. 2.0 is the first RS model to be built outside Europe. The vehicle creates a sporty sub-segment in the market's most competitive category.

Highly functional with five seats and five doors, it is a real hot hatch developing 145 hp, with a six-speed manual gearbox, ESC with sports tuning, new suspension settings, steering and brake system with four discs. New Renault Sandero R.S. will be launched in Argentina in early 2016.

"The new models that Renault is showing today herald a new era, in which products are designed and built in Latin America for Latin Americans. This is the case of the new Renault Sandero R.S. 2.0, which combines the fundamental components of pleasure and passion as seen by Renault Sport. It delivers an exciting driving experience and a sporty ambience", said Olivier Murguet, Commercial Director of the Americas Region.