Finally, A Challenger To Forza's Crown I've never been a fan of playing racing games with a steering wheel. It's not that I don't understand the point – it's absolutely superior – it's that I just don't take my games seriously enough to warrant the expense of a decent wheel. A controller, especially today's Xbox One controller, is convenient and comfortable, and still allows me to have plenty of fun while racing.

Project CARS is the first game I've ever played where I thought, "Ya know, a Playseat with a Thrustmaster TX probably isn't a bad idea." There are many reasons this $59.99 Xbox One game begets an $800 investment for a quality wheel/pedal/seat setup, and the most important one is this: it is very, very good. In fact, it's the only next-generation title that comes even close to unseating today's king of the segment, the Forza Motorsport series.

Where Forza walks a fine line between arcade-game access and simulation-level challenge, Project CARS leans far more to towards the latter. The physics feel accurate in most cases, with cars exhibiting believable behaviors across the game's tracks. Pitch a car into a turn and you can feel the suspension load up and the body roll through. Bang a curb and the wheel reacts appropriately. Tire degradation feels natural and progressive, and when the rain starts to fall, grip levels respond accordingly. It's all as we'd expect aside from a few strange cases. 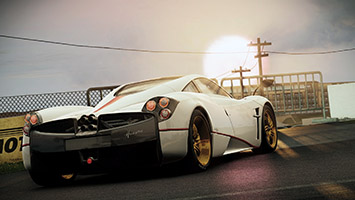 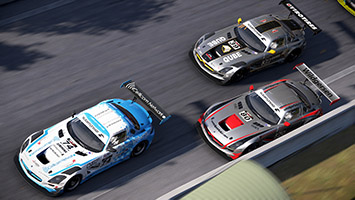 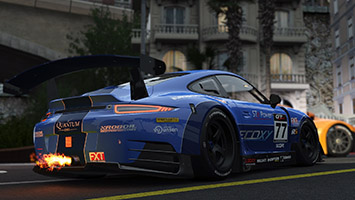 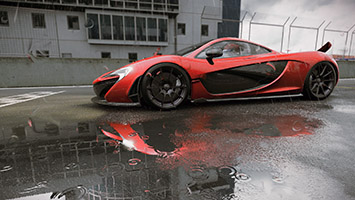 For example, almost all of the game's road cars feel ponderous and heavy, regardless of their provenance. It seems like Slightly Mad Studios, the folks behind PC, went a bit too far demonstrating the differences between a set of road tires and suspension tuning and their racing counterparts. Senior Editor Seyth Miersma, who also spent some time with the game, pointed out some wonky weight transfer characteristics, saying, "Why does my vintage Ford Escort occasionally exhibit weight transfer like the engine is behind the driver?"

The physics are easily overshadowed by what both Miersma and I agree is easily the best sounding racing game to ever grace a console. The cars sound absolutely spectacular. Developers dialed back the all-consuming tire screeching of other games and instead focused on delivering deep, visceral engine and exhaust notes. The result is a more believable and realistic auditory experience. Default in-race music? None. Refreshing.

Select the in-car view and you're treated to the whine of straight-cut gears and bumps that are accompanied by realistic suspension noises. Outside, the notes are scarcely any different than what you'd hear watching the American Le Mans Series. Some cars are even louder than others. I actually had to turn down the TV after switching from my 104-horsepower Ginetta G40 Junior and into an Aston Martin Vantage GT3. 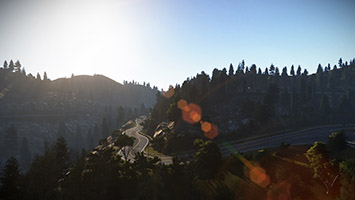 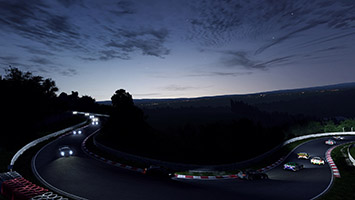 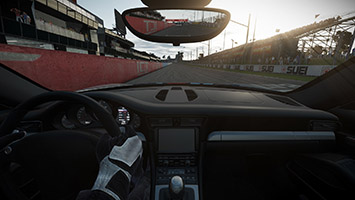 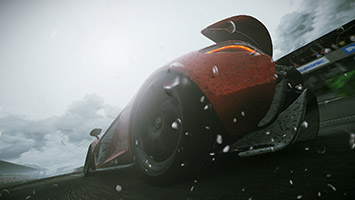 And the physics and sound aren't even the' headliners. This game is all about depth. The track roster – 29 locations with 73 track variants – absolutely shames Forza's lamentable lineup. It's almost exclusively real-world locales, too, with the lone standouts being the Sakitto and Azure Circuits, variants of the real-world Suzuka Circuit and Monaco Formula One track. There are also an pair of highway circuits meant to mimic the roads of California's iconic Pacific Coast Highway and the streets leading into Monaco, both of which harken back to Forza's Fujimi Kaido sprint course.

PC is also home to one of the most robust and interesting weather systems we've ever experienced on a racing title. Head into Practice mode and switch over to the event setup and the Conditions menu, and you're treated to a sort of God mode. You can add up to four slots of pre-programed weather, ranging from sunshine, to four different cloud settings (light, medium, heavy, and overcast), four different rain settings (light rain, rain, heavy rain, and thunderstorm), four different fog settings, two of which include rain, and a hazy setting. There's also a Random setting, if you really want to put yourself at the mercy of the meteorological gods.

Career mode is a rather rudimentary offering. Gamers pick a discipline, ranging from the basics of shifter karts and low-powered GT cars to a Formula 1-like Formula A series, LMP1, and even a multi-class Le Mans-style endurance championship. Races take the form of weekends, with one or more Practice, Qualifying, or Race sessions, although there isn't much to it beyond that. 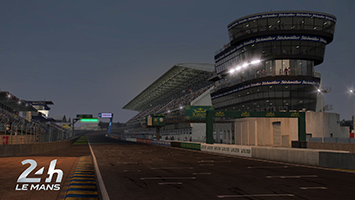 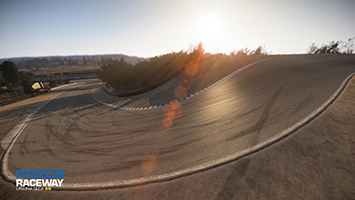 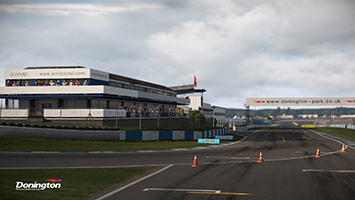 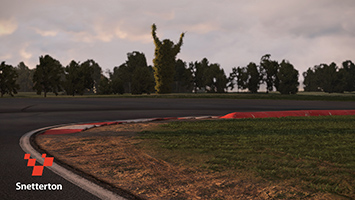 That's no bad thing, though, because the racing is engrossing. The AI, particularly at its more challenging difficulty levels, is cunning, fast, and aggressive. Computer-controlled players are a little bit too willing to trade paint through the turns, which can be annoying, but otherwise they feel almost like competing against a real human. The AI makes mistakes, they run wide, they dice, dance, and jockey for position with each other, and they can outbrake and execute absolutely beautiful overtake maneuvers.

Befitting of its simulation-like character, Project CARS delivers a broad, involving tuning system. While Forza and Gran Turismo allow you to adjust tire pressures, camber angles, ride height, sway bars and dampers, PC lets you make tweaks at all four corners rather than at the two axles. It goes beyond even that level of detail, though. Gamers can adjust brake ducting and the radiator openings to balance cooling demands with aerodynamics. Even steering ratios are adjustable.

The downside is a lack of customizability. You can't upgrade mechanical components and there's no in-game design tool. In fact, there's no economy to speak of. Just like in the real world, your team will supply the car for you. The upside, though, is that you have access to every car in the game from the first time you start it up.

That'd be dandy if it weren't for the tiny vehicle roster. At just 65 vehicles, four of which are fictional, the pickings are rather slim. For example, there are no Chevrolet Corvettes, racing or otherwise. Ferrari is completely absent as well, as is Jaguar (aside from a single LMP2 prototype). Audi, BMW and Mercedes-Benz are all represented, but the only German DTM car hails from 1991.

The car list will grow, however, so the disappointment might wane as time goes on. The company already offers eight downloadable vehicles, and will dole out the W Motors Lykann Hypersport as a free download. Vehicles will be added on monthly basis, with developers Slightly Mad Studios promising they'll be offered at no cost to gamers.

The other reason I'm shopping for gaming wheels after my time with Project CARS is, well, because the game is hard as hell with a controller. Most console-based racers are compatible with a gaming wheel, but we've never experienced one whose default settings almost demand one. Slightly Mad has developed an advanced force-feedback customization system that forces controller users to dig through the slightly convoluted menus to make gameplay feel smooth. And no, you can't turn off force-feedback entirely, unless you're willing to play without controller vibrations. Fiddle about enough, though, and you'll get steering that feels more or less like Forza. 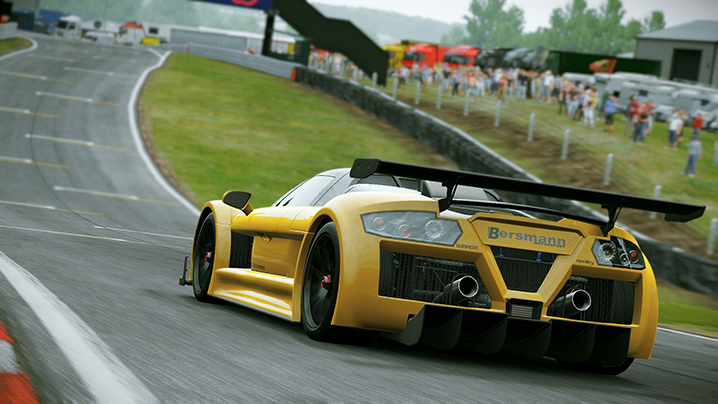 While Project CARS has me seriously considering a racing rig, there are a few things about it giving me pause. First, it simply isn't as pretty as either of the latest Forza games. The cars lack depth, and don't look as natural in direct light. Their cabins are without the subtle texturing we've come to expect from Turn 10's blockbuster, as well. That said, certain effects really work, like the way the area around the exhaust lights up as the cars spit flames. The scenery is mostly gorgeous, and the weather rendering is top notch, although the solar effects – flaring and what not – are overdone on the highest of their four settings. Truth be told, if you want the staggering good looks that Slightly Mad Studios was showing off while Project CARS was under development (and which are featured in the above gallery), you better plan on shelling out some money for a proper gaming PC.

During our time with it, Project CARS exhibited a number of glitches and issues, as well. The most infuriating, by far, were the game's frame-rate issues. We'd expect this while running a sub-par PC, but on a console? It was most notable when running races at dusk and dawn, and was particularly egregious on our first Career outing in the 125cc Kart class. It was so bad that we abandoned the championship and switched disciplines. And as good as the sound is, it came with its own issues. Sessions would occasionally load with no sound at all, while we routinely found situations where it was like the soundcard was overtaxed, leading to a jumbled mush of noise that sounds like a bad effect from The Matrix. Still, these are small, and most importantly, patchable, problems in an otherwise excellent racing title.

Project CARS is the best racing title to hit the console world since Forza Horizon 2 was released last year. By tossing that series' formula out the window, PC focuses on one, and only one thing: racing. If you're willing to get behind that single-mindedness, you'll certainly want to head to your local game store when Project CARS hits shelves tomorrow. And if you see some guy dropping $800 on a wheel, pedals, and seat, that'll probably be me. Be sure to say hello.