In a lawsuit that may be the first of its kind, Harrison Neal has asked a circuit court to prohibit the Fairfax County Police Department from retaining records beyond those used for active investigations. His lawsuit was filed Monday.

Though the lawsuit bases its arguments on a state law that regulates the storage and sharing of personal information, the outcome could be seen as a national bellwether as more states and municipalities weigh the usefulness of license-plate readers as an investigative tool against individual privacy rights.

"I don't know to what extent this litigation can be a model for other states," said Rebecca Glenberg, legal director for the American Civil Liberties Union in Virginia, who is working on Neal's behalf. "But what I do hope is that this is an opportunity for people to learn about how these license-plate readers and other surveillance technology is being used by law-enforcement agencies."

License-plate readers have stirred controversy in Virginia and elsewhere because data produced by these machines tracks time, date, and location. Over time, cumulative records can reveal sensitive personal information, such as a person's daily whereabouts, which doctors they visit, where they attend political rallies, and so on.

Such surveillance has largely been a theoretical argument in the debate over license-plate readers, but in Virginia, law-enforcement officers have used the technology for precisely this purpose. State police used license-plate readers to record information about motorists attending political rallies for both Barack Obama and Sarah Palin during the 2008 elections, according to the Richmond Times-Dispatch.

In the ensuing fallout from those revelations, then-state attorney general Ken Cuccinelli issued an opinion on the legality of license-plate readers in 2013. Through the lens of the state's Data Act, which mandates Virginia collection citizens' information only if its need is foreseen in advance, Cuccinelli, a Republican, said the state could retain records that were part of active investigations, but could not otherwise hold records for indefinite periods of time.

In accordance with that opinion, the state police purged its databases of any records not part of active investigations. But his opinion wasn't binding, and many local and regional law-enforcement agencies disagreed. They continued to use license-plate reader records as they saw fit.

Retention time is at the heart of Neal's lawsuit. The Fairfax County resident did not argue in court filings that license-plate readers should be banned entirely. His goal is to eliminate the retention of passive data on motorists accused of no wrongdoing.

"We had hoped when the attorney general issued that opinion that most law-enforcement agencies would take it seriously and stop using the technology in this way," Glenberg said. "We learned, at least in northern Virginia, that wasn't happening so much." 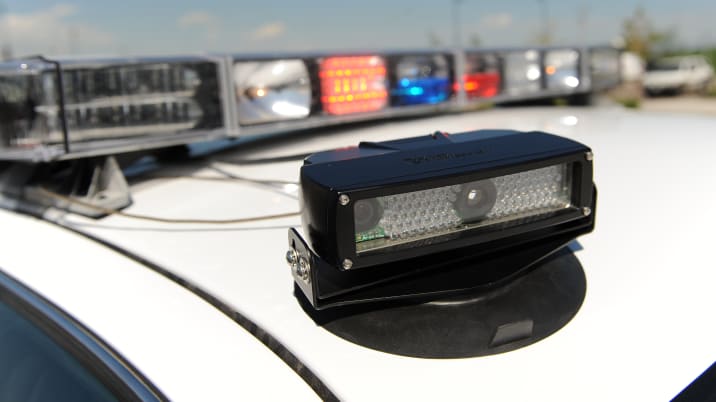 While many police departments keep data on file indefinitely or have no clear retention policy, Fairfax County currently recognizes a one-year limitation on keeping records. By contrast, the Department of Homeland Security has proposed a five-year retention policy for a national database of license-plate records it soon hopes to use.

There's no easy answer on what constitutes an appropriate retention threshold, said Linda Merola, a professor of criminology and law at George Mason who studies license-plate readers.

"The problem is that we don't have answers to enough questions to settle on a specific time that is best," she said. "We have a hunch, and law-enforcement us saying it could be useful, and we have anecdotal evidence, but we don't have any scientific research yet. It could be that data is very useful for two weeks, and then usefulness drops off. Or six months. We just don't know yet."

It's not known how many license-plate readers the Fairfax County Police Department uses, nor how many records it holds in databases, which are sometimes shared with other law-enforcement agencies in the greater Washington DC area. A request for comment about the lawsuit went unreturned Wednesday.

As part of its written policy, the department says, "the purpose of the retention period is to increase protection of the community by providing an investigative tool to aid in the detection or investigation of terrorism or a series of related crimes."

Setting a retention policy has been a bipartisan priority in Virginia's state legislature. The state Senate sent two bills to Gov. Terry McAuliffe earlier this year that would have set statewide limitations, essentially allowing him to pick which of the two he preferred. One would have set the nation's strictest retention policy, mandating police delete records after seven days. The other would have set a 60-day limit. Both measures received support from both parties, but McAuliffe, a Democrat, vetoed both piece of legislation last Friday.

Had McAuliffe signed either bill, Glenberg said Neal's lawsuit would have not been filed.