Is A 1.0L EcoBoost Enough For The Blue Oval's C-Segment Fighter?

View All Specs
Add a Review
Sitting down at the pre-drive briefing with Ford engineers ahead of sampling the refreshed 2015 Focus, water bottles clinked as we wet our whistles before Q&A. While pouring a glass, we noticed something stamped on the bottle label: "1L." One liter. We were palming the exact displacement of the EcoBoost engine our group was about to drive. This was undoubtedly coincidence (such bottles litter every conference and dinner table in Europe) but it served to drive home just how small the total swept volume of Ford's wunderkind powerplant really is. It's tiny.

Of course, this isn't our first run-in with the little triple – we've sampled its turbocharged charms before in Ford's smaller Fiesta. At that time, we found it had plenty of poke for the subcompact, but the larger C-segment Focus carries around another 450 pounds or so and pushes a wider profile through the air. Would the three-cylinder have the stuffing to make the most of the Focus' athletic chassis, or would it be a letdown? Would it be the same as it was when we tested it in a Euro-spec Focus a couple of years ago? There was nothing left for it but to head out on the bucolic roads surrounding Versailles the day after the Paris Motor Show and find out for ourselves. 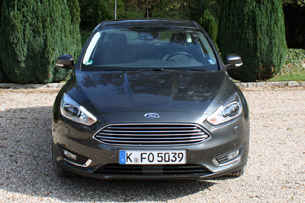 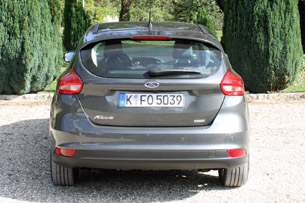 Gone is the 2014 model's polarizing mouth-breather look, binned in favor of the trapezoidal son-of-Aston grille treatment.

We can't go much further without noting the Focus' much-updated appearance. Gone is the 2014 model's polarizing mouth-breather look, binned in favor of the trapezoidal son-of-Aston grille treatment and narrower headlamp look that's spread throughout Ford's passenger car lineup. It's a comprehensive rethink that includes a wholly different front fascia, light fixtures, fenders, hood, and even a relocated and resized Blue Oval emblem. Out back, the old car's v-shaped license plate pocket has been smoothed over and a pair of reshaped, somehow duller taillamps now bookend the hatchback. Overall, the new look is much more refined and svelte, but to our eyes it somehow lacks the brashness and distinctiveness of the previous car.

Regardless of what you make of the exterior changes, the interior rework is likely to be more welcome. The outgoing cabin featured a high-tech aesthetic, but it also felt cluttered and button-heavy. Not so with the new one, which features a sporty three-spoke wheel and a slimmer, nicely rationalized center stack an arm's length away. The latter is a major improvement, with more traditional and user-friendly climate and infotainment controls and a handy phone bin with adjacent USB and 12V plugs. MyFord Touch remains the resident interface on navigation-equipped models like our Titanium-spec tester, and while the system is improving, it's still far from our favorite. Material choice and observed fit-and-finish on these early-run cars was very good, as was seat comfort.

Any questions of powertrain refinement quickly go out the window once you step on the throttle.

Powering away into the French countryside, if nobody told you there was an Evian bottle's worth of displacement split among three cylinders determining your progress, you'd never, ever suspect it. Thanks to its Continental turbo that helps deliver the engine's full 148 pound-feet of torque from just 1,400 rpm, the 1.0-liter EcoBoost behaves like a much larger unit – in fact, its power delivery characteristics are almost diesel-like in the way it delivers strong low-end performance but doesn't like to rev much. Yes, the engine's 123 horsepower arrives in full at 6,000 rpm, but peak torque packs it in at 4,000 rpm. Despite an indicated redline of 7,000 revs, an electronic limiter rudely cut in 500 revs early. Thankfully, you won't often find yourself needing to rev that high, and besides, Ford officials promise the gauge markings will be corrected before the car arrives in the US later this year.

Fortunately, any questions of powertrain refinement quickly go out the window once you step on the throttle. This 1.0L is pleasant piece of work, with no dead spots, untoward vibrations or high volume levels to accompany its efforts. Counterintuitively, the engine features an old-school iron block and aluminum head – Ford engineers note that iron's superior stiffness and quicker warm-up times as the prime reasons for going with the less-costly metal, and besides, with such a small engine, mass is less of an issue to begin with. The long-stroke design incorporates twin variable cam timing and charge cooling to boost low-end oomph and overall drivability. 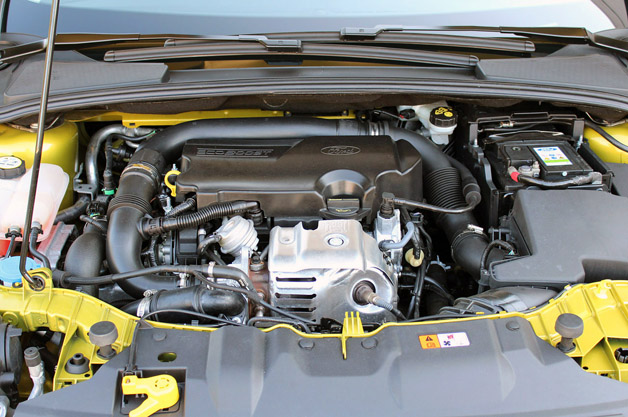 Fuel econ figures ought to be similar to that of its Fiesta cousin, which nets 31 mpg city, 43 mpg highway.

Interestingly, the Romanian-built 1.0L does without balance shafts – instead, the flywheel and crankshaft have been intentionally unbalanced to counter the action of the outside cylinders. It's an elegant solution that works well – the EcoBoost may actually be more refined than the current Focus' 2.0-liter four-cylinder, an engine that offers more horsepower (160) but less torque (146 lb-ft) at higher revs. That I4 will continue as the baseline for the 2015 model year, with the EcoBoost being available at extra cost (pricing hasn't been released, but if the Fiesta's option sheet provides any guidance, it'll be around $995).

Ford has yet to release fuel-economy estimates for this new 1.0L, but figures ought to be pretty similar to that of its smaller Fiesta cousin, which nets 31 miles per gallon city, 43 mpg highway and a combined rating of 36 mpg. Even allowing for some degradation, those metrics compare very favorably with today's Focus 2.0L manual, which manages 26/36/30, though as we've noted in previous road tests, we've often found it very challenging to net EPA test results with EcoBoost powerplants, even in everyday driving. 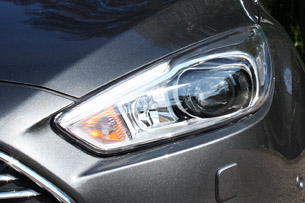 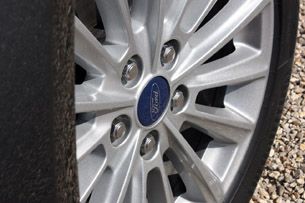 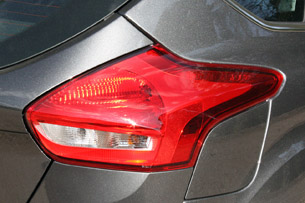 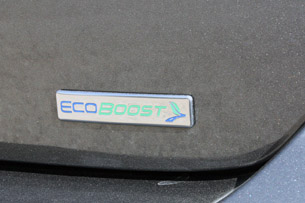 The six-speed manual gearbox we sampled – the only transmission so far confirmed – was a pleasure to use.

The six-speed manual gearbox we sampled – the only transmission so far confirmed as available with the EcoBoost at launch – was a pleasure to use, with a light, direct action and a clutch pedal to match. With all that torque down low, you won't feel the need for constant shifting around town (though first gear is a bit short). However, midrange and upper gears are all quite tall – there was one moment on the autoroute where we neglected to put it in sixth for several miles, such is the overall refinement of this package. In any case, the car never felt out of breath.

As is the way these days, electric power steering has been fitted to the 2015 Focus to improve fuel economy and better enable the availability of convenience features like self-parking, as well as new safety technologies like lane-keep assist (the latter of which relies on our preferred feedback loop – haptic – delivering warning vibrations through the steering wheel instead of a chime that alerts the entire cabin to your waywardness). Blind-spot warning with cross-traffic alert is also available. 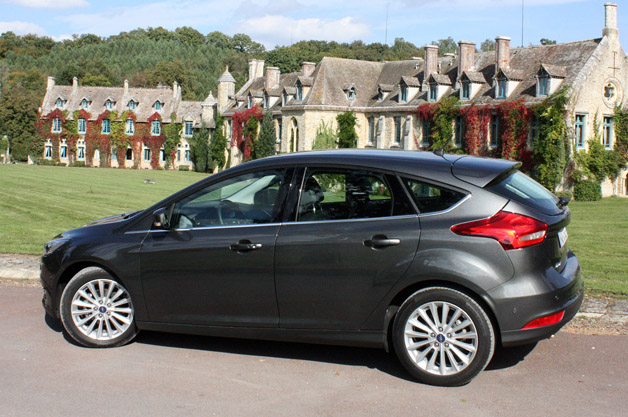 "Mature" is a good way to describe this updated third-generation Focus all the way around.

What few small, cobblestoned towns we trundled through revealed not only the Focus' good low-speed ride quality on its 17-inch rubber, but also the merits of its well-executed stop/start system, which will come as standard fit on our car. We often tend to shut these systems off out of annoyance, but this one is refined enough to be tolerable.

The majority of our drive route was on the relaxed side of challenging, with lots of pleasingly undulating farm and forest vistas but little in the way of sharp corners, let alone mountain attack stages. Thus, final word on handling will have to wait until one of our California contributors can give it a proper canyon shakedown, but we observed a mature, well-damped ride from the Focus' recalibrated suspension and pleasingly weighted steering with good accuracy and decent feedback for an electric system.

In fact, "mature" is a good way to describe this updated third-generation Focus all the way around – it's traded in a modicum of its spunk and much of its youthful indiscretion for some added refinement and sophistication, not to mention higher-quality interior furnishings. We suspect it's a tradeoff that will suit most buyers very well. Besides, the ST performance model will still be around to help us let our hair down with an altogether different recipe for EcoBoost performance: two bottles-worth of displacement.