Noah Joseph
Safety in Formula One racing has come a long way over the past few decades, but accidents still do occur. And when they do, we're reminded of the inherent dangers involved in such a fast-paced form of motorsport. 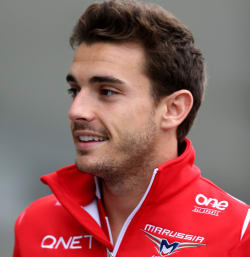 Our latest reminder has unfortunately come at the expense of one Jules Bianchi, driver for the Marussia team. On lap 42 of the Japanese Grand Prix at Suzuka today, Bianchi crashed into a recovery vehicle that was evacuating Adrian Sutil's Sauber. Sutil's crash had prompted the race marshals to deploy double yellow flags to warn of the danger, but the warning evidently didn't prevent Bianchi from losing control of his car at the same Turn 7 where Sutil had gone off-course.

We're saddened to report that Bianchi suffered what the FIA has described as a "severe head injury" as a result of the crash. The injuries were diagnosed by a CT scan performed at the Mie General Hospital to which Bianchi was evacuated by ambulance from the circuit's medical center. The 25-year-old French driver, part of the Ferrari Driver Academy development program, has undergone surgery to address his injuries, and was slated to be transferred to intensive care to monitor his progress. The race, which had seen the safety car and the red flag deployed off and on due to the severely rainy conditions, was subsequently called off early.

We wish Bianchi all the best in his recovery and will keep you updated on his progress as significant developments emerge. Watch this space as well for our full synopsis of the race, and continue on below for the full statement from the FIA.
Show full PR text
Note to the media regarding Jules Bianchi
SUN 05.10.14

On lap 42, Adrian Sutil lost control of his car, spun and hit the tyre barrier on the outside of Turn 7. The marshals displayed double waved yellow flags before the corner to warn drivers of the incident. A recovery vehicle was despatched in order to lift the car and take it to a place of safety behind the guardrail. While this was being done the driver of car 17, Jules Bianchi, lost control of his car, travelled across the run-off area and hit the back of the tractor.

Once the marshals reported that the driver was injured, medical teams were despatched and the Safety Car was deployed. These were followed by an extrication team and an ambulance.

The driver was removed from the car, taken to the circuit medical centre and then by ambulance to Mie General Hospital.

The CT scan shows that he has suffered a severe head injury and he is currently undergoing surgery. Following this he will be moved to intensive care where he will be monitored.