The running order has been established for the 92nd running of the Pikes Peak International Hill Climb for all classes and everyone's had all the practice they're going to get. On Sunday, June 29, the 14,110-foot-high mountain will ask each of them, "Who wants some?" Unlike previous years, while the bikes will run according to class, the cars will run according to their qualifying times set on the bottom section of the course, regardless of division, the fastest guys going first.

That puts Romain Dumas at the head of the 67 car entries, having set a time of 3:37.525 in his Norma M20 RD in the Unlimited Class, but the next Unlimited entry doesn't appear until sixth, Piero Nappi in his Picchio P4 pp with a time of 4:03.357. In between them, the two Mitsubishi MiEV Evolution IIIs start second and third in the Electric Modified class, that first one driven by Greg Tracy 11 seconds behind Dumas. Then comes Monster Tajima is his E-Runner Pikes Peak Special, then Paul Dallenbach leading the Open Wheel class, four positions ahead of the next Open Wheel competitor.

Pikes Peak organizers will stream the event, but it requires a paid subscription to watch: $3.95 for one hour of viewing, $9.95 for three hours, $19.95 for unlimited watching and $100 for unlimited viewing and an official program. That feed also contains a cache of archival Pikes Peak footage and interviews. The site BoldRide says it is livestreaming the whole race in partnership with Erix Audio, and that appears to be free. You'll get live timing and results during the race here, and you can follow the Pikes Peak Facebook and Twitter pages for photos and quips. If you do keep up with the feed, you'll find Autoblog behind the wheel of Car #0, a Mitsubishi Lancer Evo, driving the parade lap up the mountain to open the race for the car divisions.

For a few more tidbits on the race and the Mitsubishi MiEV Evolution III, keep reading below.
THE RUN OF SHOW 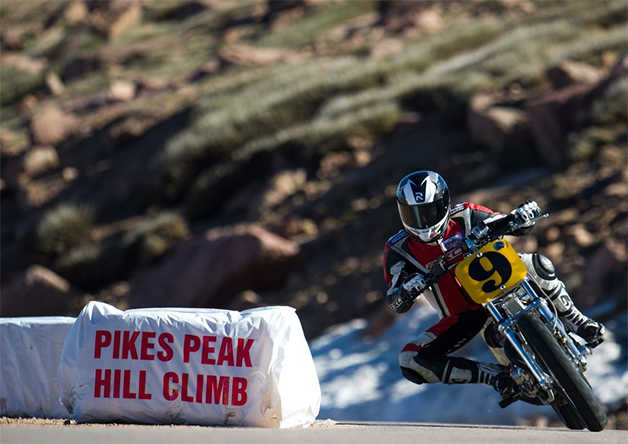 The race starts at 8 a.m. Mountain Daylight Time, which is one hour ahead of the West Coast, two hours behind the East Coast. The bike divisions will run first, in this order: Vintage Motorcycle, Pikes Peak 250, UTV/Exhibition, Electric Production, Electric Modified, Lightweight, Middleweight and Open. There will be a break to get the bikes down from the summit, then the cars will go. After the cars have run, the Sidecar and Quad classes will run. That's Mark Shim in the image above, who will get the day started on his #9 Triumph Bonneville. The image is courtesy of Jamey Price who has captured some excellent shots of motorcycle action this week.

SPEAKING OF BIKES, HOW COULD WE FORGET GUY MARTIN? 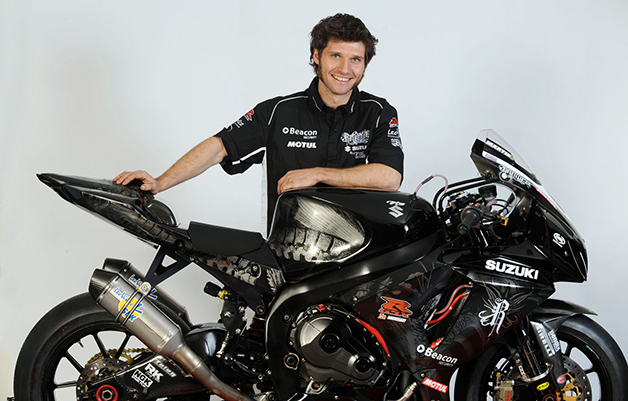 As commenter Vision7 noted, in our first Practice Day post on this year's race we didn't mention that the inimitable Guy Martin is in the field. Our apologies. If you don't know who he is, then get a copy of Closer to the Edge and enjoy one of the best racing movies out there, this one focusing on the Isle of Man TT, motorcycle racers and the unusual character of Guy Martin. He'll be starting eighth on Sunday at the head of the UTV/Exhibition class on a bike he built himself: a 1992 Suzuki GSX-R1100 fitted with a Martek frame and turbocharger and putting out 320 horsepower. Martin wants to beat the 9:52.819 overall motorcycle record that Carlin Dunne set on a Ducati Multistrada 1200. If he doesn't manage that but scores a run of less than ten minutes, he'll be one of only three people – Dunne and Greg Tracy are the others – to do so. 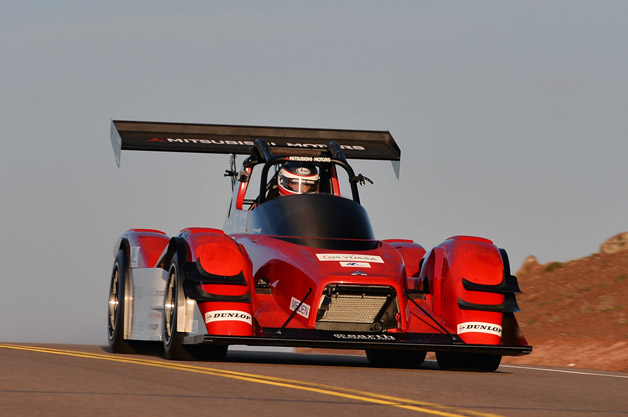 Greg Tracy's added two more wheels to his repertoire, though, and wants to make this the year that Mitsubishi gets its gold medal. He said his list of requested changes for this year's car was, "Bigger brakes." He got those - six piston stoppers up front instead of four-piston - and much more. The Evolution III is lighter and more powerful, with 604 hp this year from its four electric motors compared to 536 last year. The chassis structure is the same but it's been strengthened to handle the additional power and cornering speeds, and the bodywork on top of it has been completely reworked to provide better aerodynamics with additions like a longer front splitter, winglets on the front fenders, a new main plane on the rear wing and an extension of the body behind the rear wheels.

Tracy and teammate Hiroshi Masuoka - a two-time winner of Dakar - will get more from the increased power with a stiffer suspension, new gear ratio in the single-speed transmission to increase corner exit speeds, revamped software that improves torque vectoring on the Super All-Wheel Control (S-AWC) system, new ECU software that allows individual control of the electric motors and larger 330-series Dunlop racing tires replacing the 260-series' from last year. Its prototype motor and new inverter control settings also give the drivers more power and torque over a great spread of the rpm range. Both drivers said they're happy with the changes, Tracy adding that there have been more power gains than aero gains, so, "You really gotta drive it." 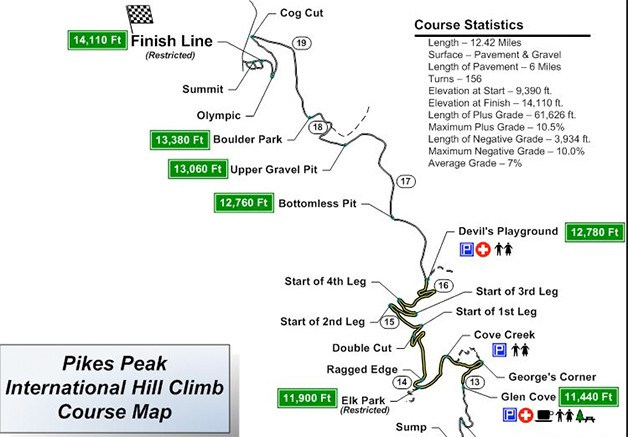 Click the image above to see the entire course, but it's 12.42 miles long with more than 156 turns over 4,720 feet of climbing, with an average grade of seven percent. Even though it's all paved now, drivers have noted that the last mile is still a challenge - the road is so lumpy that the fast guys will get all four wheels off the ground, so no one will be coasting to the finish. If you want to know what kinds of strange things can happen on it, check out the Honda from Heaven action from Wednesday's practice session.

That's it for our pre-race report. Make sure to stop by the high-res gallery of Friday practice above, and we'll see you soon enough with a recap and video from our drive up the hill.