McLaren isn't a company used to standing still. It has 182 grand prix victories under its belt, a dozen Formula One titles and some of the most lust-worthy supercars ever made. So we could hardly blame anyone (ourselves included) for impatiently anticipating what the team at Woking has coming next. Of course, McLaren itself is eager to keep its customers focused on the considerable offerings it already has on hand, but speaking to a few key McLaren personalities has given us some clues.

The project known internally as P13 is focusing on a rival to the Porsche 911 Turbo and Audi R8. P14 is still a mystery that no one at Woking is willing to talk about at this stage. And P15 is set to slot in between the 650S and P1 once the latter completes its 375-unit production run. But let's not get too caught up with upcoming products before we're done with the latest 650S.

As our own Matt Davis will be bringing you shortly in our First Drive report, McLaren has been demonstrating the new 650S to journalists as a prodigious track weapon at the Ascari Race Resort in Spain. But before all is said and done, there will be even more track-focused versions of the 650S to follow. 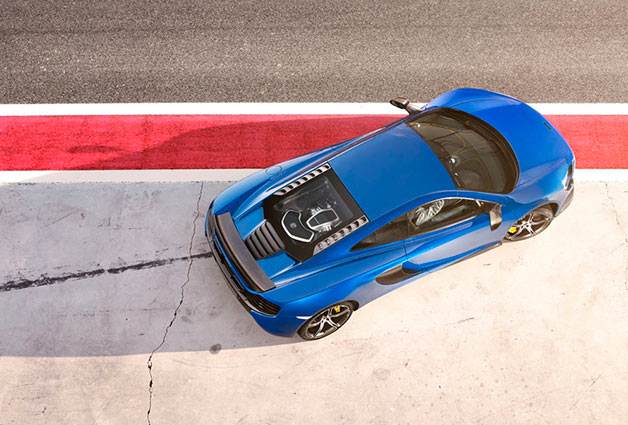 Speaking one-on-one with Autoblog, McLaren CEO Mike Flewitt confirmed that the new 650S is destined for the racetrack, and in multiple guises at that. First up will be the 650S GT Sprint, which could very well get a different name before it hits the circuit. This track-bound version of the 650S will follow in the footsteps of the 12C GT Sprint, a circuit toy of which McLaren has sold about 25 examples to date. Developed by McLaren's GT racing department, the 12C GT Sprint features updated aerodynamics, suspension and safety equipment, along with a set of Pirelli racing slicks to better suit it for roadcourse use. We'd expect the 650S GT Sprint (or whatever it's ultimately called) to carry over most (if not all) of the same features, plus the upgrades which McLaren Automotive applied to the 12C to transform it into the 650S – including the revised front end and upgraded engine. Flewitt tells us to expect the new Sprint track car to launch later this year.


It won't be until next season, however, that McLaren GT will hit the racing circuit with its new 650S GT3. Since the current 12C GT3 shares little with the road-going 12C, the 650S GT3 will likely be based more closely on the existing racing machine than on the new 650S, but it will at least get the latter's revised front end to make it look more like the rest of the McLaren lineup. Tight regulations will likely mean that its output will likely be the same when it tackles the 2015 seasons of such championships as the Pirelli World Challenge, the Blancpain Endurance Series and the European Le Mans Series at the hands of customer racing teams. While Flewitt had to admit that the idea of tackling Le Mans again is tempting – as McLaren did to such great effect with the F1 GTR in the 1990s – no such prospect is currently in the cards. That makes sense, particularly since McLaren already has its hands full in F1.

What isn't immediately clear is the future of the 12C Can-Am edition. Seen one way, the 12C Can-Am is a mid-point between the 12C GT Sprint and the race-spec 12C GT3, but with no regulations to make it either street-legal or comply to any sporting series' framework, the Can-Am edition is actually more extreme than either. Flewitt tells us that the GT division has sold about eight of them, but when inquired on a future Can-Am version of the 650S, we were told that largely depended "on the future of 12C production." The current plan is for the 12C to continue to be offered in certain markets – particularly ones (like Singapore, for example) with a taste for exotic machinery but a high tax rate on imported cars.

The 650S is already lighter, more powerful and less expensive than the Ferrari 458 Speciale.


As for reports that McLaren is planning a more extreme road-going version of the 650S, we're told that remains a possibility, but is as-yet unconfirmed. The 650S is, after all, already lighter, more powerful and less expensive than the Ferrari 458 Speciale, for example. Of course, given the will and the means, customers can order just about anything they want from McLaren Special Operations – even something as extreme as the X-1 Concept. But considering that the same engine that empowers the 650S with 641 horsepower has proven capable of producing 727 hp in the P1 (908 hp with the hybrid boost), the possibility is certainly there to tune the 650S to an even higher extremes.