Koenigsegg is celebrating its 20th birthday this year, and for the occasion, the Swedish specialists are taking the hypercar to the next level with its new Agera One: 1 at the 2014 Geneva Motor Show. In fact, it claims that, because it is the first production car with a one megawatt of power (1,341 horsepower), and a power-to-weight ratio of one-to-one (kilogram to horsepower), it goes beyond super or hyper and is actually the "world's first megacar." 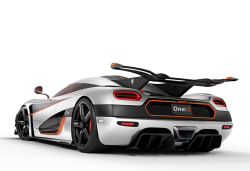 This road-bound rocketship is powered by twin-turbocharged, 5.0-liter V8 with the previously mentioned 1,341 hp and 1,011 pound-feet of torque. A seven-speed dual-clutch gearbox and electronically-controled differential makes sure all that grunt gets to the wheels. It is equipped with seemingly science-fiction features like variable geometry turbos in custom, 3D-printed housings and a 3D-printed titanium exhaust. While Koenigsegg claims top speed was not a factor when creating the One:1, it says that it has a simulated top speed of around 440 kilometers per hour (273 miles per hour), which would make it the world's fastest production vehicle. However, the One:1 can never hold the Guinness world record for top speed because only six will be built, all of which it says are already spoken for.

Instead of speed, Koenigsegg says that the One:1 is meant to be a "track focused car." The Swedes claim 2 Gs of cornering capability on road-legal tires, thanks to up to 1,345 pounds of downforce at 160 mph from an active rear wing and independent, active left and right front flaps. In addition to those aids, the ride height, dampers and spring rates all adjust with the car's speed. The chassis can predict the road ahead using GPS, and drivers can even study telemetry later with a 3G connection sending the car's data to an iPhone app.

The One:1 seems to be the next automotive quantum leap on par with the Bugatti Veyron. However, no one outside of Koenigsegg has actually driven it yet. It will be very interesting to see if real life stands up to what the megacar claims on paper. Scroll down to read the press release about the brand's spectacular 20th birthday present, and make sure to check out the high-res gallery, which includes a full spec sheet and great detail on the One:1's aerodynamics package.
Show full PR text
Koenigsegg 2014 Geneva Auto Salon Press Release

Celebrating 20 Years By introducing - The Agera One:1 – Worlds first Megacar

The journey of Koenigsegg, since inception, is truly incredible. It all started on August 12th 1994 when a young man, age 22, set out to realize his childhood dream. A young man fuelled by passion, ingenuity and mind-bending will.

Christian von Koenigsegg had just made up his mind to live his dream and start his own car company. The odds were stacked against him. It was a now or never moment.

His idea was to create a sports car that he felt did not currently exist and one which he believed would be desired – two essential necessities for success, Christian felt.

The concept: A lightweight mid-engined car, with a detachable, stowable hardtop. A wrap-around screen for good visibility and aerodynamics. Short overhangs with two large intercooler intakes on the side of the car, behind the mass centre to aid high speed stability.

A car that looked and felt good with the top up, as well as in roadster guise, transformed in minutes with the hard top neatly tucked away inside the car. A car with a timeless efficient appearance that age like good wine.

This was a mid-engine car concept that did not exist at the time. The CC8S was born. Every Koenigsegg created since includes this simple but effective DNA and stay true to Christian's original vision.

It has been an amazing ride. From boyhood dream to a shining, all-conquering and powerful reality. It's awe-inspiring stuff that dreams are made of.

Five production models with as many Guinness production car records later - it is a fact, Koenigsegg has exploded on to the scene and is here to stay.

When Christian is asked what his greatest achievement is - he says without hesitation: -Living the dream!

Just imagine what the next 20 years will hold.

Time for the One:1