Toyota's first hybrid model – the Prius – went on sale in 1997 in Japan. It took 14 years for the company to see a cumulative total of three million hybrids (a mark reached in March 2011). Today, Toyota announced that its global sales figures of all of its gas-electric models (and there are a lot of them now, including ones we've barely heard of here in the US, like the Crown Majesta or the Harrier Hybrid) have reached six million. Toyota calculates that all those hybrids have saved 41 million tons of CO2 emissions from entering the atmosphere.

Toyota's ever-increasing hybrid sales pace means the company sold as many in the last three years as it did in the first fourteen. As you can see in our chart, the trendline shows that we'll hit the next-million mark in short order. In fact, Toyota says that it sold a million hybrids in the last nine months, the shortest time it has ever taken the automaker to sell that many hybrids. Part of the reason is that there are 24 hybrid Toyota and Lexus models available around the world, and Toyota says another 15 will be coming in the next two years. Anyone want to guess when Toyota will hit seven million? August? 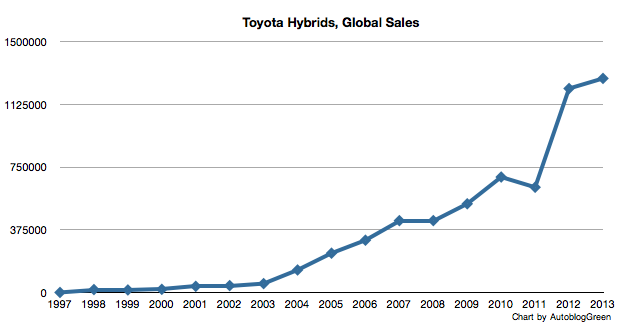 Helping mitigate the environmental effects of vehicles is a priority at Toyota. Based on its belief that environment-friendly vehicles can only truly have a positive impact if they are widely used, Toyota has endeavored to encourage the mass-market adoption of hybrid vehicles.

As of this month, Toyota sells 24 hybrid passenger car models and one plug-in hybrid model in approximately 80 countries and regions around the world. Furthermore, within the next two years, Toyota will launch a total of 15 new hybrid vehicles worldwide, including the new "Harrier Hybrid" in Japan on January 15 and the new "Highlander Hybrid" in the United States in the near future. Toyota will continue augmenting its product lineup even further and increasing the number of countries and regions where it sells hybrid vehicles.

Toyota calculates that as of December 31, 2013, Toyota hybrid vehicles2 have resulted in approximately 41 million fewer tons3 of CO2 emissions-believed to be a cause of global warming-than would have been emitted by gasoline-powered vehicles of similar size and driving performance. Toyota also estimates that its hybrid vehicles have saved approximately 15 million kiloliters of gasoline compared to the amount used by gasoline-powered vehicles of similar size.

In August 1997 in Japan, Toyota launched the "Coaster Hybrid EV" and launched the "Prius"-the world's first mass-produced hybrid passenger vehicle-in December. Since then, Toyota hybrid vehicles have received tremendous support from consumers around the world.


*Global figures contain sales from markets other than Japan, North America and Europe