Noah Joseph
We all know someone who's named their car. And chances are – let's face it – that person is probably a girl. We're not being sexist here: we're just looking at the numbers presented by a new study from DMEautomotive.

The industry research group conducted a study that indicates that one in five American car owners have named their vehicles. But that one in five is likely to be female and between the ages of 18 and 24. The study upsets certain notions of men being more attached to their cars than women, and millennials not caring about cars: at 23 percent, women proved more likely to personify their vehicle than men (at 18 percent), and car owners in their late teens or early twenties are the four times more likely to name their cars than someone over 55.

Because most women (by far) view their car as female and men are pretty evenly split, there's about twice as many "female" cars on the road as "male" ones (those identities having been ascribed by the vehicles' owners). But this part had us scratching our heads the most: apparently one in four cars that have names, have names that begin with the letter B: as the tidy infographic above shows, Baby, Betsy, Bessie and Betty (along with Black Beauty) rank among the most popular names for cars in America.

Of course some cars may be more susceptible to being named than others, though the study (whose findings you can read below) doesn't get into that. As our friends at Road & Track discovered, Mini dealers have devised a simple way of figuring out whether an owner may be interested in trading in: if they've named their Mini, chances are slim that they'll be willing to part with it.

Daytona Beach, FL – January 13, 2014 – Women and younger car owners are the most likely to give a nickname and associate a gender to their vehicles', according to a new report from DMEautomotive. The survey on car-naming behavior investigates the depth of the emotional connection between consumers and their cars as represented by the degree to which they personify and ascribe a gender to their vehicles. The survey was fielded among approximately 2,000 consumers in 2013, and also revealed that one in five car owners nickname their vehicles.

"While these findings, on the surface, are just plain fun...they also offer an interesting, even counter-intuitive perspective on the relationships car owners, especially women and the young generation, develop with their vehicles," said Doug Van Sach, DMEautomotive's Vice President, Strategy and Analytics. "The accepted cliché is that men have a more passionate, personal relationship with their beloved cars, while women view them as utilitarian machines that get you from Point A to B. But this research provides a different insight: women are significantly more likely to christen their vehicles, and also associate a female gender with them, while more men perceive their vehicles as male. And while we've seen numerous headlines on the fact that millennials are the least car-passionate generation in history, they're far more likely to personify and name their vehicles. This indicates an emotional and personal vehicle attachment in these demographics, one that auto marketers might want to explore and leverage."

Vehicle Relationship Building Begins with a 'B' 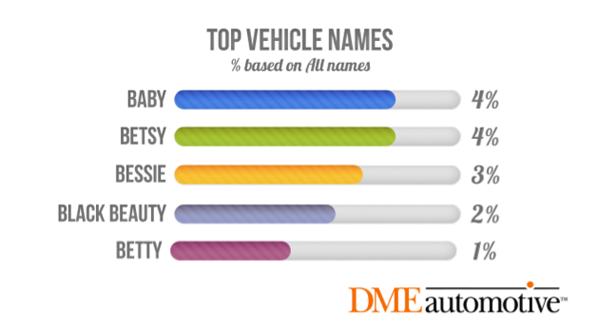 Young Much More Likely to Name Cars than Older People 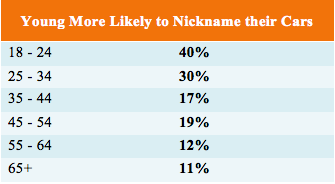 DMEautomotive (DMEa) is the industry leader in science-based, results-driven automotive marketing, and provides turnkey marketing to the largest and most innovative automotive organizations, from automobile dealerships to many of the largest aftermarket companies in the U.S. DMEa's uniquely panoramic view of the complete automotive sales and service market, combined with its cutting-edge, science-based marketing programs, increases customer yield, conversion and retention.