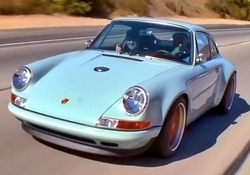 After waiting four years to drive the Porsche 911 Reimagined by Singer, we finally got our chance to review it from behind the wheel earlier this year. Every auto writer is familiar with salivating over the chance to drive a vehicle that has stirred them from the moment they saw a picture of it, then being crushed when the drive turns out to be terrible - and this includes $300,000-plus hand-built supercars, too. The Porsche 911 Reimagined by Singer was the antidote to that, going well beyond the abundant hopes we had for it.

It's pulled into Jay Leno's Garage for some time with Mr. Burbank, and Singer founder Rob Dickinson gives Leno a tour of the coupe's whats and whys: the early nineties 964 structure underneath the sixties 911 "Butzi" bodywork rendered in carbon fiber, the Cosworth-developed 3.8-liter engine with 350 horsepower, the quilted leather over the Firesafe fuel tank and matching luggage up front.

But you should let Dicksinson tell you in his own words. As for Leno, Singer's work appears to hit all the right buttons for him, too. You can watch him enjoy it in the video below.