Brandon Turkus
In case you haven't heard, there were some controversial changes to the Formula One rulebook made recently, adding things like double points for the season-ending race and the ability for each driver to choose their own number (previously, a driver's finishing position in the previous season was used).

The new rules have been met with some degree of disdain, though, and have led a number of sources to come up with their own satirical additions to the F1 rules. Lotus F1, which has one of the cheekier Twitter presences in the sport, has come up with 18 additional rules it thinks would add to the sport.

While some of them make a fair amount of sense, like rule nine ("The team who designs the ugliest car of the season will be deducted 15 percent of their final points tally"), the rest are certainly on the silly side of things. For example, Lotus proposes that drivers aren't fined for doing donuts after a victory, but it does suggest drivers will need to eat the same number of donuts during the course of the post-race press conferences.

Lotus also suggests that any driver named " Sebastian Vettel" complete their own pit stops, without help from mechanics, and that "loophole exploiting devices can only be used if they have a cool name." We've posted the entire list below, so scroll down and let us know what your favorites are, as well as what you think should be added. 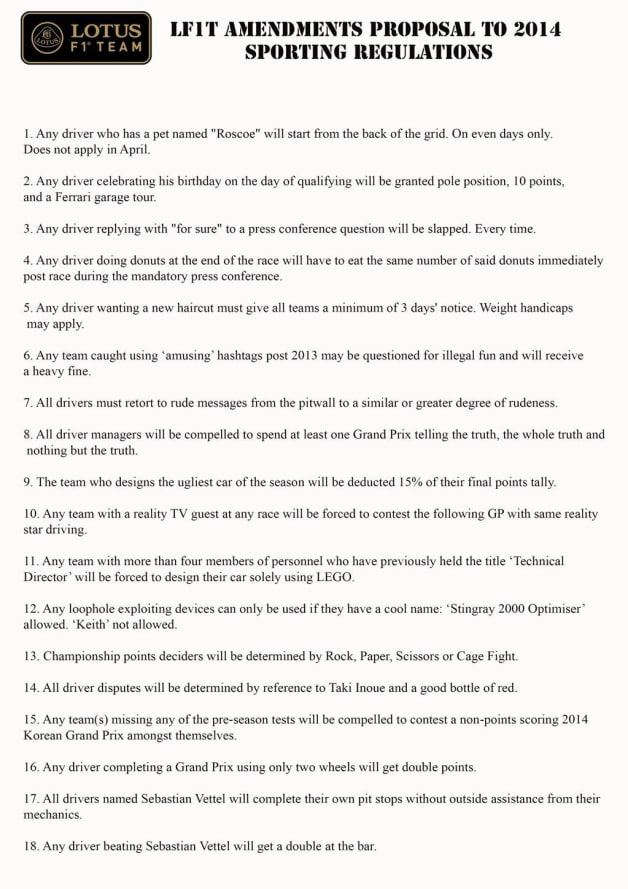