If you're in the market for a rugged and capable off-road SUV, the redesigned 2014 Range Rover Sport is quickly proving itself worthy of a second look. Although it may have gotten lost among the 22 SUVs vying for the Motor Trend SUV of the Year, the Range Rover Sport has followed up its Petersen's 4-Wheel & Off-Road 4x4 of the Year award with a similar honor, having just been named Four Wheeler magazine's Four Wheeler of the Year. The Land Rover beat out the 2014 Jeep Grand Cherokee EcoDiesel and 2014 Cherokee Trailhawk (in addition to the updated Toyota 4Runner Trail and Dodge Durango, among others.

To qualify as a contender for Four Wheeler of the Year, a new or updated SUV must be on sale before January 15, 2014 with a planned production run of more than 1,500 and an available two-speed transfer case. The five SUVs were tested for a full week before the Range Rover Sport broke Jeep's three-year stranglehold on the award, which won with the Wrangler for the last two years and with the Grand Cherokee in 2011.
Show full PR text
(MAHWAH, N.J.) – December 5, 2013 – The 2014 Range Rover Sport has been crowned the '2014 Four Wheeler of the Year' by Four Wheeler magazine, marking the third time a Land Rover vehicle has won this top honor.

Now in its 41st year, this annual competition, positions the newest 4x4 SUVs against one another in a variety of tests conducted by the Four Wheeler editorial staff, awarding points for performance capability and build. To qualify for the award, the vehicle must be a new model or have significant improvements from the previous model year. The contestant must also be equipped with a transfer case with a dedicated low-range gear, have a minimum production run of 1500 units and be on sale before February 15, 2014. The complete test results and vehicle evaluations for the 2014 'Four Wheeler of the Year' competition will appear in the February 2014 issue, available on stands December 17, 2013, and online now at www.fourwheeler.com.

"It is a great achievement for the very luxurious and performance oriented Range Rover Sport to be named 'Four Wheeler of the Year,' by the country's oldest four-wheel drive enthusiast publication," said Kim McCullough, Brand Vice President, Land Rover North America. "To win this extreme off-road competition with the all-new Range Rover Sport highlights the work our engineers and designers have done to enhance our already-leading breadth of capability."

"Our testers appreciated the 510hp, nearly 12 inches of ground clearance, 10-11 inches of wheeltravel at each corner, and a 0-60 time of 5 seconds flat. Add a traction control system that allows the driver to make use of these impressive specifications on- and off-road, along with a plush interior with all the amenities and you have our 2014 Four Wheeler of the Year, the Range Rover Sport," said John Capa, Editor-in-Chief of Four Wheeler. 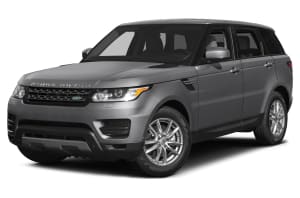