As much as we may love hot hatches like the Volkswagen Golf GTI and Ford Focus ST, there are a number on offer in Europe that we'll just never get here. And soon we'll be able to add one more. 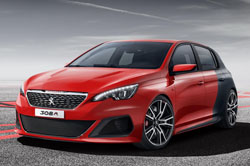 Speaking with Automotive News Europe, Peugeot CEO Maxime Picat revealed that a new 208 R is on its way. The model will slot in above the existing 208 GTI (pictured above) – another hot hatch which, like the rest of the Peugeot lineup, isn't sold here – and likely take some cues from the 308 R concept (pictured at right). The 208 GTI packs a 1.6-liter turbo four with 197 horsepower, while the production RCZ R and 308 R concept employ the same engine to 270 hp. Expect the 208 R to fall somewhere in between.

The goodwill generated by the 208 T16 with which Sebastien Loeb recently conquered Pikes Peak seems likely to have paved the way for the 208 R, but that won't be the end of it. Picat further indicated that Peugeot would like to apply the same treatment to the 308, effectively putting the aforementioned 308 R concept into production.