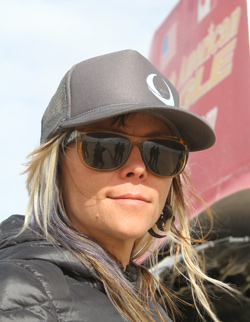 A couple of weeks ago, Autoblog's video series, The List: 1,001 Car Things to do Before You Die, tackled something that's been top-of-mind since the day we came up with the concept for the series: Drive The Bonneville Salt Flats. If you saw that episode, you know that not only did hosts Jessi Combs and Patrick McIntyre check it off their List, Combs was there to work on getting qualified to make a run for the title of World's Fastest Woman.
Show full PR text
FOR IMMEDIATE RELEASE

ALVORD DESERT, Oregon (October 9, 2013) – Jessi Combs has firmly established herself as the fastest woman on four wheels. Today she surpassed the existing women's land speed record with a two-way average speed of nearly 392 miles per hour through a measured mile on the dry lakebed at the Alvord Desert in southeastern Oregon. That speed beat her own 344 mph mark from yesterday, a speed that already surpassed the previous record of 308 mph set in 1965 by Lee Breedlove, wife of former world land speed record holder Craig Breedlove.

At one point during her run, Jessi reached a top speed of 440.709 mph. "That felt so unbelievably good," exclaimed Combs when told of her new record. "I knew that one was really, really fast."

Combs made two runs today in the Eagle. The rules require that a driver make two passes across a measured course, once in each direction, with the second pass completed within 60 minutes of the first. Officials then average the two speeds. On her first run, she passed through the measured mile at 354.931 mph, exiting the mile at 2:25 pm. But she was not entirely pleased with that first pass. "The car ran great, but I kept getting pulled into the ruts from yesterday's runs," she said.

After coming to a stop at the south end of the lakebed, the team turned and serviced the Eagle so that Jessi could re-fire the jet engine to make her return run. At 3:15 pm, she re-entered the measured mile and recorded a speed of 430.978 mph, for a two-way average of 392.954 mph.

The vehicle that Combs drove, the North American Eagle (NAE) Supersonic Speed Challenger, is considered a "car" because it has at least four wheels. But it is certainly not a car you would see on any road. The Eagle is a 14,000 pound, 50,000 horsepower converted F-104 Lockheed Starfighter jet that once served as a chase plane for the X-15 and SR-71. The all-volunteer team of American and Canadian engineers and former military personnel removed the wings and added wheels to convert the F-104 into a jet-powered car that may ultimately travel at more than 800 mph.

Combs is an automotive metal fabricator and currently co-hosts All Girls Garage (Velocity by the Discovery Channel) and The List: 1001 Car Things to do Before You Die (AutoBlog). Previous television appearances include Mythbusters and Overhaulin' (Discovery Channel), Xtreme 4x4 (Spike TV), and Two Guys Garage (Speed Channel).

In 2014, team owner Ed Shadle will drive the Eagle in an attempt to break the current world land speed record of 761 mph. With the current British record holders at work on a new vehicle of their own, the NAE team is not only faced with the challenge of breaking the current record, they are also in a race with the British to be the first to set a new land speed record.