Infiniti is preparing to roll out its hotly anticipated 2014 Q50, a car that not only ushers in a new alphanumeric naming strategy, it ostensibly replaces the G37 as the brand's bread-and-butter sport sedan. That will happen, but not in the short-term, as the G37 will continue to be manufactured and sold alongside the Q50, at least for the rest of this year.

Infiniti spokesman Kyle Bazemore has confirmed to Autoblog that a decision is pending on how long to extend the G37 sedan's production run. "We're taking Q50 up a little bit, and that allows us to keep the G Sedan in the lineup... It [Q50] certainly started as a replacement, but it ended up being much more than that." Confusingly, Infiniti has already announced that the Q50 is to start at $37,605 (including $905 destination charge), yet the 2013 G37 is more expensive, starting at $38,255 delivered according to Infiniti's consumer website. Thus, a price drop on the G37 is likely coming in short order.

So why hold on to the older model? With the Q50 launching exclusively with V6 and Hybrid models (a turbo four and diesel are said to be in the cards down the road), Infiniti evidently feels it is risking leaving lower-end sales on the table. "There's a lot of movement with the [ BMW] 320i and such, and this allows us a two-tier strategy to compete," says Bazemore. Keeping the G37 on tap at a lower price for fleet sale duty may also serve to protect the Q50 as it establishes itself on the market.

For the moment, Infiniti is still determining whether to continue G37 sedan production beyond the 2013 model year, and some of that may depend on the arrival time of its new entry-level front-wheel drive model, expected to be dubbed Q30. A decision is likely to be made over the next few weeks. Adding to the confusion, the existing G37 Coupe and Convertible will be immediately rebranded as the 2014 Q60 Coupe and Convertible, even though they won't be based on the new Q50. 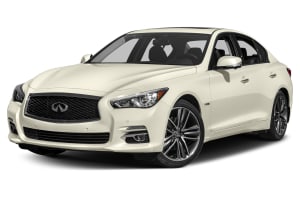