Jonathon Ramsey
When the Honda Factory Performance package debuted for the 2013 Honda Accord at SEMA last year, we were told it would come as optional fitment for both the four-cylinder and V6 Accords. Now that Honda has put it on sale, however, it's only for the V6, at least for now.

The upgraded coupe will be limited to just 500 copies, and it will be known by its 15-millimeter-lower ride height thanks to a sport suspension, exclusive 19-inch wheels on summer tires, ground effects all around the car and HFP badging. Interior updates will be limited to red illumination and HFP floormats.

Honda says the package will cost $4,620 – a $30 drop from the price announced at SEMA - not including installation, and it come with a 3-year/36,000-mile limited warranty if you have it put on when buying the car new. The press release below can tell you more.
Show full PR text
HONDA FACTORY PERFORMANCE PACKAGE NOW AVAILABLE FOR ACCORD COUPE V6

To verify that the HFP package is more than just a pretty face, HPD, better known for its pinnacle racing efforts, was enlisted to conduct back-to-back track testing of the Accord Coupe V6 in stock and HFP forms. Their testing revealed that both cars are able performers, but the Accord equipped with the HFP package, utilizing a sport suspension package and 19-inch summer tires, felt more confident and stable and is capable of going around the track faster than the stock car.

The HFP package features 19-inch HFP alloy wheels; a decklid spoiler; HFP sport suspension (lowers height by 15mm and enhances handling); HFP front, side and rear underbody spoilers; red interior illumination; HFP floor mats and HFP badges for each side and the trunk. The HFP package, like all Honda Genuine Accessories, carries a 3-year/36,000-mile limited warranty when installed at the time of new vehicle purchase, and is engineered to be fully compatible with the vehicle. Enhancing its exclusive appeal, only 500 examples of this limited-edition HFP package will be sold for the 2013 Accord Coupe V6. The Manufacturer's Suggested Retail Price (MSRP) of the package, not including installation, is $4,620. 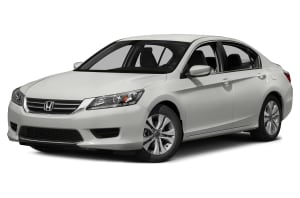