Facebook user Marchettino (already a minor YouTube celebrity for his supercars channel) spotted the successor to the Lamborghini Gallardo throne out and about on public streets and was kind enough to snap a few photos of the machine. Word has it that a concept car precursor to the newest supercar will bow at the upcoming Frankfurt Motor Show this September under the Cabrera name. As you've likely already heard, the model is said to ride on the second-generation Audi R8 platform, complete with a composite aluminum and carbon fiber construction to reduce weight as much as possible. How light will will the Cabrera be? Lamborghini is reportedly shooting for a curb weight of around 3,300 pounds.

Power will likely come from a massaged version of the 5.2-liter V10 in the current Gallardo. Expect around 600 horsepower and 400 pound-feet of torque.

The vehicle in these photos looks to have abandoned some of the Gallardo's angles in favor or more organic lines, though it's possible body cladding is hiding the car's true design. Murcielago SV-style sills and side air intakes serve up quite a bit of aggression and the quad exhaust looks properly menacing as well. We can't wait to see the finished product. 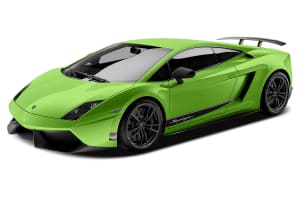