The Paceman will join the ever growing American Mini family next year, company officials confirmed Wednesday as they kicked off the first day of this year's Mini Takes the States cross-country rally.

"You are the first to hear this, even before the press" Dr. Kay Segler, senior vice president of Mini brand management told the crowd of 1,000 Mini fans ready to start their engines at the rally. "The Mini Paceman is the official name of the brand's seventh model, which will be launched next year in the U.S."

The Paceman is basically a coupe version of the Mini Countryman, though no specifics were provided on Wednesday. It was shown last year as a concept vehicle in fully loaded John Cooper Works trim at the 2011 Detroit Auto Show.

Mini officials promised to reveal the vehicle sometime this year, so it's easy to speculate that it will be be on the floor at the Paris Motor Show this September. Car and Driver did just that a few weeks ago, though it said the car would be named the Countryman Coupe. 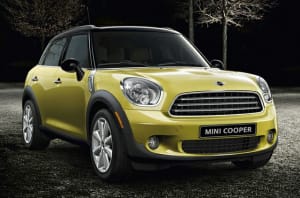