Starting with the 2013 Altima, Nissan will be launching five all-new products in the United States over the next 15 months. And while the sedan you see here is initially heading to China as the Nissan Sylphy, it'll be heading to our shores as the Sentra later this year, albeit with a few market-specific tweaks.

For now, Nissan has released a short video teaser of the North American-spec 2013 Sentra, which you can view after the jump. The video shows the new compact sedan in its SR trim, which Autoblog has learned is only a North American-specific trim package. The rest of the Sylphy's styling appears to carry over largely unchanged, with new details like LED running lamps and taillamps rounding out a design that's essentially a downsized version of what we see on the new Altima.

In China, the Sylphy will be launched with a 1.8-liter four-cylinder engine mated to Nissan's next-generation Xtronic continuously variable transmission. It might not be an all-new powertrain, but remember, this is the same strategy that Nissan is using with the new Altima – one that has paid big dividends in fuel economy. The engines themselves haven't changed, but with an improved CVT, we should see gains in not only performance but fuel economy, as well.

We'll see the North American-spec 2013 Sentra this summer with the car officially going on sale this fall. Scroll down to watch a teaser video of the Sentra SR, and to read the full press materials about the Chinese-market Sylphy.

Highlights of the Nissan show:

Nissan developed a one-class-above solution that exceeds customers' expectations - retaining the popular features of the current model while upgrading design, perceived quality, roominess and performance. In fact, Nissan has virtually re-imagined the category, delivering high quality styling outside and spacious, quiet comfort inside with the latest "smart" amenities, plus remarkable fuel efficiency.

Design with Excitement and Confidence

The modern design language of the exterior is carried over to the spacious interior with high quality materials and cabin details crafted to please the senses. Within the roomy cabin, passengers enjoy generous shoulder room and legroom one would expect in more expensive vehicles. The trunk's capacity is among the best in its class. Thorough noise isolation, vibration absorption, and an advanced suspension with optimized high-stiffness body assure a peacefully smooth ride. Amenities for comfort and convenience include dual-zone air conditioning, Intelligent Key and keyless pushbutton ignition.

This new model, to be produced at the Dongfeng Nissan Huadu Plant facilities in Guangzhou, will be released in mid 2012. Following its introduction in China, the car will be launched in most major markets worldwide during the course of 2012 and approximately 120 countries by 2014.

Other highlights in the Nissan booth include:

Multi-usage zero emissions small van is designed to provide businesses or families with flexible, roomy interior space, while achieving outstanding environmental performance as a zero-emission vehicle with no tailpipe emissions, including CO2.
http://www.nissan-global.com/EN/NEWS/2012/_STORY/120109-01-e.html

On the heels of the Beijing Motor Show, at which Nissan Motor Company unveiled an all-new global sedan, Nissan North America (NNA) announced that this new model will be the basis for an all-new 2013 Nissan Sentra. In conjunction with the announcement, Nissan released teaser video clips and images of the North American market's uniquely styled 2013 Sentra SR. The all-new Sentra will be unveiled in the United States later this summer and go on sale in the fall.

"Sentra is the third of five all-new core models we'll be introducing in a 15-month product onslaught," said Brian Carolin, senior vice president, Sales and Marketing, NNA. "The all-new Altima goes on sale this summer and will be followed closely by the all-new Pathfinder and Sentra. And when the next two new models launch in 2013, we will have refreshed 75 percent of our volume, rewarding our loyal owners and attracting new customers into Nissan showrooms."

The all-new 2013 Sentra will be launched as the nameplate celebrates its 30th anniversary in the U.S., promising to bring a new level of refinement and innovation to the segment. Nissan will unveil the Sentra and release more details about it this summer 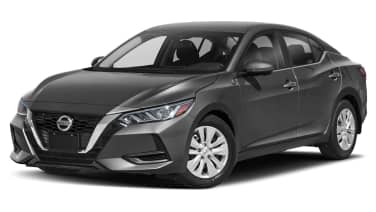 $680 - $1,203 Nat'l avg. savings off MSRP
See Local Pricing
I'm not in the market for a vehicle at this time. Please move this suggestion to the side for 30 days.
Huge Savings