Jeff Sabatini
Sorry, Phillips de Pury & Company, but you guys evidently had no business auctioning this car at a sale of contemporary art. Because no matter what the dynamic rap duo of Kanye West and Jay-Z did to it, this 2004 Maybach 57 is, first and foremost, a used car. Clearly the art community has voted with its wallets – and decided that the vehicle's value is about what you could make if you parted it out. Frankly, that's sad.

For those that don't remember, the Maybach was heavily modified for use in the music video for the song "Otis," the Grammy Award-winning hit from Kanye's 2011 album Watch The Throne. Despite its overt ugliness, the car certainly has provenance. (Did we mention that the song won a Grammy?) We only hope that whomever ponied up the paltry sum of $60,000 for the "Otis" Maybach is either a real music fan or someone who goes on to resell it at Barrett-Jackson or another car auction where they know how to move the celebrity metal.

Be sure to check out our gallery of the "Otis" Maybach, and click past the jump to watch the music video. 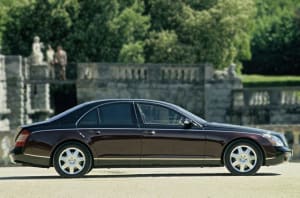