Steven J. Ewing
The car in the image above may bear a striking resemblance to the 2013 Lexus GS, but take a second look – that's actually the next-generation ES, despite its shockingly similar appearance. It's no secret that Lexus' new hourglass grille is quickly spreading across its entire model range (check out the recently unveiled 2013 LX 570 for reference), and while the ES looks fashionably familiar, there are a few new touches to note.

Underneath the headlamps we can clearly see a row of LED running lights, similar to what's found on the GS... and IS... and CT. Around back, there's a similar resemblance to the larger GS, though the lines are a bit more sedate – a good thing, as the ES shopper tends to be a little more conservative than folks opting for the rear-wheel-drive GS. Chinese site Autohome got its hands on some interior photos, too, and – surprise, surprise – there's a whole lot of GS in the reworked cabin as well, with a two-tiered dash featuring large navigation/infotainment screen up top.

The car Autohome caught is the ES 250 model, which suggests that Lexus' 2.5-liter V6 is underhood – the same engine available in the GS 250 in other markets. Here in the United States, the ES will still likely be available with the automaker's 3.5-liter V6, though earlier reports have suggested that a new hybrid model could also be in the cards. 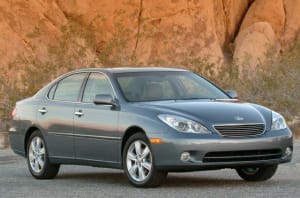