Coming your way via a leaked brochure, the 2013 Lexus RX is apparently undergoing a facelift that will bring its appearance in line with the brand's latest design language – centering around the pinched chrome-edged "spindle" grille that characterizes the front of the latest GS sedan. Reshaped headlamps with a strip of LEDs flank either side, and, of course, it's all riding on new wheels.

While the RX may not be exactly what you'd call "performance-oriented" – floating as it does down the road and communicating less through the steering wheel than you'd expect from a pouting pre-teen behind a slammed bedroom door – the new model is apparently getting an F Sport trim kit. That would include a new front bumper, honeycomb grille, rear spoiler, bigger wheels and tinted lamps, with sportier trim to match on the inside.

We'd expect to see Lexus officially release the new RX sometime within the next few weeks, with a probable debut at the New York Auto Show in April, but in the meantime you can scope it out right here. 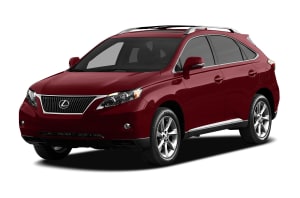