Infiniti takes us behind the scenes in World's Fastest Hybrid vid

Jeff Sabatini
Nissan clearly wants to get as much mileage as it can out of the "duel" it staged between its Infiniti M Hybrid and the Porsche Panamera S Hybrid. You'll remember the spot, showing the M35h ripping through the quarter-mile in less than 14 seconds, ahead of the hybrid Porsche. Infiniti got Guinness World Records to proclaim it the fastest accelerating full hybrid last year, which served as the inspiration for filming the online ad.

Now, a new video has been posted to YouTube, showing some behind the scenes footage of the filming of the ad. It's not exactly earth-shattering stuff, as the parts we found most interesting were the shots of the camera chase car, which is neither an Infiniti nor a Porsche, but actually a Mercedes-Benz M-Class.

While we like the spot, this second go-round with it had us contemplating other things. We always wonder about the effectiveness of comparing your brand to another when it's clearly done to try and rub some of that competitive luster onto your own badge. And backing it up by throwing out a name that we most closely associate with overweight twins riding motorcycles? We like the M Hybrid, and we're happy to get more of a look at it, but if Infiniti really wants to impress, we'd like to see some more competitive comparisons, like how it performs on a road course or even how it matches up with non-hybrid models.

Click past the jump to watch the full video. 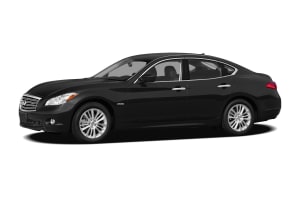