In addition to the GT hatchback, Hyundai also rolled out a new Coupe version of the C-segment Elantra here at the 2012 Chicago Auto Show. The new two-door is clearly meant to take on the likes of the Honda Civic Coupe, and it's got a spec sheet that compares rather favorably with its competitor from Japan.

For starters, the 2013 Hyundai Elantra Coupe rides on a wheelbase that's three inches longer than the Civic. The 1.8-liter four-cylinder engine puts out 148 horsepower and 131 pound-feet and up to 29 miles per gallon in the city and 40 on the highway highway with the six-speed manual gearbox. Automatic models score one mpg less in both city and highway testing.

So... the Elantra Coupe has more room, more horsepower and better fuel economy than the Honda Civic Coupe. As far as styling goes, that's obviously subjective... but we'll cast our lot in the direction of the Hyundai for its sweeping good looks over the more subdued sheetmetal of its biggest competitor. Check out our high-res images of live photos above. 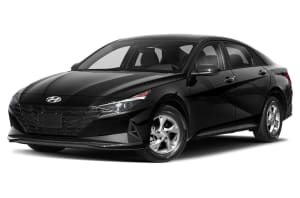