Noah Joseph
It may not be a World Rally Championship event, but Mini is celebrating its first win at an international rally (at least its first such win of the modern era).

The event in question was the Qatar International Rally, a fully FIA-sanctioned event that kicks off the 2012 Middle East Rally Championship (MERC). Abdulaziz Al-Kuwari (with his brother Nasser as co-driver) edged out the competition by an impressive margin of 2:24.9 in the Mini Countryman JCW Super Production Car – the same vehicle that Prodrive fields in the WRC but with a smaller wing and restrictor plate, and similar to the X-Raid vehicle that recently won at Dakar.

Victory at the event was particularly meaningful for Prodrive, which got its start at the Qatar International Rally way back in 1984 to kick off the first MERC in the Rothmans Porsche 911 SC RS (pictured in the high-res image gallery below).
Show full PR text
MINI WINS FIRST INTERNATIONAL RALLY

"It is a fantastic feeling to win this rally," said Al-Kuwari, who became the 32nd driver in history to win at least one round of the MERC. "I have achieved success in national rallies in Qatar, but this was the big one. This was the rally I wanted to win. It was a great battle with Nasser. The new car was fantastic. This is the biggest win of my career."

Prodrive chairman, David Richards, said: "It is particularly fitting that the MINI's first international win has come in Qatar, as this was also Prodrive's first ever rally back in 1984 in the inaugural year of the FIA Middle East Rally Championship, when Saeed Al Hajri took victory in our Rothmans Porsche 911 SC RS. Saeed went on to win the Middle East Rally Championship that year; let's hope Abdulaziz can do the same."

The MINI SPC is the regional rally specification of the MINI World Rally Car. The cars are nearly identical except that the SPC runs with a smaller engine restrictor (30 mm versus 33 mm) and a smaller rear wing. 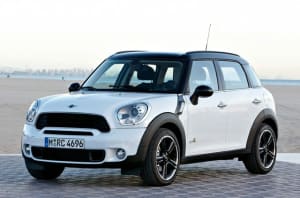