Noah Joseph
You think the prom limo market in America has a propensity for stretching anything with wheels? Just look at China. Instead of buying larger sedans there, wealthy Chinese buyers have a taste for stretching smaller ones. So while BMW, for example, already offers a larger 7 Series, they've developed a stretched 5 Series for the Chinese market. We thought that a little strange at first, but this one takes the cake.

Since the Porsche Panamera has one of the nicest interiors on the market, one aftermarket tuner of note has developed a stretched version specifically for China. That tuning firm is no less noteworthy than Ruf, the outfit that has made a name for itself by turning ordinary 911 models into supercar-beating, fire-breathing monsters.

The resulting Ruf Panamera XL is a good 40 centimeters longer than stock, giving it an extra measure of legroom in the back. And while this type of stretch job would normally make an exotic performance automobile like a Porsche look more than a little odd, given the almost universal derision of the Panamera's roofline, we'd venture to say this – to some eyes, anyway – might be considered an improvement. So much so, in fact, that Porsche is rumored to be considering developing one on its own – let's just hope that if Stuttgart tackles one on its own that they do a cleaner job of the resolving the B-pillar. 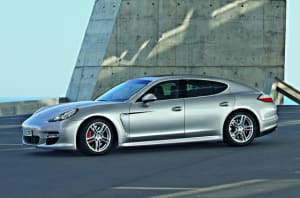