Over the summer, we posted on a project being undertaken by students at the Tennessee Technical Center-Nashville and Nashville State Community College: prepare a 400-horsepower, 5.6-liter V8 from an Infiniti QX56 for seafaring duty in a 20-foot Chris-Craft.

The engine's transformation is nearly complete, but it seems the boat needs a great deal more work. The pleasure craft, which dates from 1962, has already has three other marinized engines from car manufacturers, a Lincoln and two Chrysler Hemi powerplants. The gents at Freeport Boat Outlet in Freeport, Maine are overseeing the wooden hull restoration and have said that 85 percent of the mahogany will need replacing.

When it's finally finished, the QX lump with water-cooled manifolds and a closed cooling system will be mated with a ZF/Hurth marine transmission and tested back at Infiniti HQ. Assuming all goes well, the hull will get an SUV's worth of Infiniti luxuries and be married to its engine. In the meantime, the name of the boat is being put to the public, so have a read of the press release after the jump for all the details. Then, come summer, keep an eye out for a very slick watercraft plying Tennessee's lakes.
Show full PR text
Infiniti QX56-Powered Boat Project Update – Marinized Engine Awaits Restoration of Classic 1962 Chris-Craft Holiday

FRANKLIN, Tenn. (Dec. 28, 2011) – For the students from Tennessee Technical Center-Nashville and Nashville State Community College, waiting is the hard part. Having finished their critical role in the Infiniti QX56-powered Boat Project – removing the powerful 400-horsepower 5.6-liter V8 from the donor Infiniti QX full-size SUV and working with instructors and Infiniti personnel to get it operational outside of the vehicle – they are anxiously looking forward to the day when they can experience the engine's full power on the water. All that's missing, it seems, is the boat.

A little over 1,000 miles away in Freeport, Maine there is indeed a boat, resting upside down in a well-heated craftsman's workshop – stripped of its engine, hardware, wiring, interior and hull planking. It is, as the students might say, not even the shell of its former self. More like the skeleton. But that's the good news. The second phase of the project is well underway.

Hot Rodding a Classic Chris-Craft
The concept of "hot rodding" – putting a newer, more powerful engine in a classic chassis – is not limited to motor vehicles alone. As much as its history can be traced, the new Infiniti QX56 V8 will be at least the fourth engine to ride between the rich mahogany wooden hull sides of the 1962 Chris-Craft "Holiday" that is serving as the body for the transplant. Previous engines have included a 431-cubic inch Lincoln plank head marine engine and a pair of 440-cubic inch Chrysler Hemi marine V8s, including one with a high-performance dual-quad carburetor set-up.

"The use of the powerful Infiniti QX56 V8 is fitting with the history of this particular craft," explained George "Dodo" Brockman, owner of Freeport Boat Outlet, who is overseeing the build of the Infiniti boat project. The Infiniti V8 is actually lighter than all of the previous powerplants and won't require any special bracing or hull modifications to fit it into the original engine bay."

After its removal from the original QX56, the engine was sent to Bracket Marine in Westbrook, Maine for a trial fitting and modification of the engine's bell housing for use with the ZF/Hurth marine transmission. The engine was then sent to a shop in Alabama for "marinization" – a process that involves fabrication of water-cooled exhaust manifolds and the adaptation of a closed cooling system. The big 5.6-liter V8's next stop will be back to its birthplace, the Infiniti engine facility in Decherd, Tennessee, where it will be run on the dynamometer to make sure its horsepower and torque are still up to factory specs. Finally, the engine will be returned to Maine for final installation in the hull. But first, a total restoration of the hull is in order.

"Before the future Infiniti lake cruiser can return to the water, we've had to tear it down to virtually nothing and start building it back up with fresh wood," said Brockman. "Once we removed the current engine and interior, we turned it upside down on a special cradle and started working on removing the hull planking to expose the inner framing. Ultimately it looks like we'll have to replace nearly 85 percent of the original wood, one piece at a time, due to age and rot. Some pieces you could put your fist right through. When it's done, however, it's going to look just like new – only better with the Infiniti engine, upholstery, audio system and other luxury components."

The other thing Brockman is quick to mention is when finished, the boat will take to the water like an Infiniti sport sedan takes to the road. "When the 20-foot Chris-Craft Holiday model was introduced in 1962, it was said to be one of the best performing Chris-Craft hulls ever produced. It cornered well, was easy to come on plane and was often used in nationally sanctioned competition water skiing events for just those reasons. We can't wait to see how this classic design performs with the new engine."

Brockman estimates that when the hull and decking restoration is complete, he and head craftsman Jimmy Martin will use more than 600 board feet of high grade sustainably harvested mahogany to cover the framework, hull, transom and deck. For the hull and deck, they start with two-inch thick boards, cut them down the middle, and then mill to half-inch planking to create book-matched pieces for each side. The inside wood, even the parts not visible to the eye, goes through a similar handcrafting process. Assembly of the new wood pieces follows the original process, only with modern bonding agents (in addition to the screws) providing improved structural integrity. Eventually 15 coats of special marine varnish will be applied over a period of 25 to 30 days.

After the wood restoration is complete, the third phase, reassembly, will begin. The plan is to reupholster the original seating with new Infiniti QX semi-aniline leather, with XM® contributing a NavWeather™ system and Bose® providing a speaker and subwoofer system similar to an Infiniti QX. A custom boat trailer, painted to match a 2012 Infiniti QX56, will also be constructed.

Project updates with teaser photos will be available at facebook.com/infiniti and twitter.com/infinitinews. Fans and followers of these sites will also have an opportunity to name the Infiniti-powered boat.

About Infiniti
Infiniti offers a full-line of luxury performance automobiles, including the G Coupe, Sedan and Convertible, Infiniti M sedan, EX and FX crossovers, and the QX full-size SUV. More information about Infiniti and its Total Ownership Experience® can be found at www.InfinitiUSA.com. 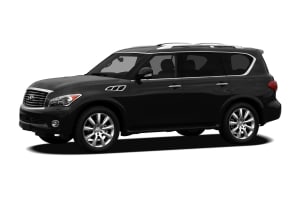