It's been a very long time since the midsize market went easy on American automakers, and recent years have conspired to make an uphill sales slog even steeper with a rash of new and redesigned models. Kia and Hyundai have taken up arms by offering buyers the stylish and efficient Optima and Sonata in an effort to dethrone longtime D-segment stalwarts like the Honda Accord and the freshly redesigned Toyota Camry. Not one to back away from a fray, Nissan has been busily sharpening the next-generation Altima to do battle with the rest of the war horses on the field, and Volkswagen has just recently unleashed a new Americanized Passat to riotous praise from the automotive press.

The barbarians aren't just at the gates for automakers like Ford and General Motors. They're picnicking on the front lawn.

Ford has turned to its global operations for help designing a new Fusion fit to beat back the invading hordes while General Motors has focused on transforming the aging Chevrolet Malibu into a weapon capable of carving out a more sizable market share. Built on new bones borrowed from the company's Global Mid-Size architecture, the 2013 Chevrolet Malibu will boast an all-new direct-injection 2.5-liter Ecotec four-cylinder engine by mid-2012 and a turbocharged 2.0-liter four-cylinder version will debut shortly thereafter.

But buyers who flock to Chevrolet dealers in the first quarter of 2012 won't find those vehicles waiting for them on the show room floor. Instead, GM has moved to launch the new 2013 Malibu with just one engine option – it's most efficient. Meet the 2013 Chevrolet Malibu Eco.

The outgoing Chevrolet Malibu benefited from a stylish exterior that was simply starting to grow stale in the face of fresher sheetmetal from the competition. Designers have managed to incorporate the familiar face of the 2011 model in a new way. While the company's corporate dual-inlet grille and center-mounted Bowtie have tagged along for another generation, elements like the heavily contoured halogen projector headlights, aggressively sculpted front fascia and scalloped hood all help lend the sedan a bit more personality. The vehicle is also substantially wider than before, with a full two inches of width added in the rear and 2.5 inches of span up front.

GM unleashed the aerodynamic hounds on the 2013 Chevrolet Malibu in an effort to squeeze ever better fuel economy from the vehicle. Subtle adjustments like squared headlight housings, slightly smaller sideview mirrors and a specifically proportioned and chamfered rear decklid are all part of the recipe along with plenty of unseen tidbits. Engineers chose a unique grille set up for the Malibu in which the upper opening is completely sealed at all times. The middle opening remains partially open to provide proper air flow for the engine compartment and the lower inlet makes use of the same active shutter technology found on the Chevrolet Cruze Eco.

Throw in a dash of underbody cladding and the 2013 Chevrolet Malibu Eco is good for a .30 coefficient of drag. For reference, the Chevrolet Corvette is only slightly slipperier at .29 – a figure the standard 2013 Malibu will reach in part thanks to its more aerodynamic wheel and tire package. GM tallied the pros and cons of greater fuel efficiency by decreased drag or decreased rolling resistance courtesy of the Goodyear Assurance rubber found on the Eco, and the 17-inch alloy wheels and low-rolling rubber won out against the slicker 18-inch option. GM says that the standard Malibu will feature a coefficient of drag that's within spitting distance of the .28 of the Chevrolet Volt – a figure that vehicle shares with the 2012 Toyota Camry.


Designers strove to pull parallels between the new Malibu and the Chevrolet Camaro by importing the muscle car's square tail-light treatment.

GM specifically said the automaker wanted to give mid-sized buyers a sportier, more aesthetically interesting vehicle in the 2013 Malibu. While we'll gladly agree the four-door looks as sharp as a snake bite from the front compared to most of the its competitors, the design quickly grows dull toward the vehicle's rear just as before. The company's designers have taken pains to draw parallels between the new Malibu and the Chevrolet Camaro by importing the muscle car's square taillight treatment. To put it simply, the stunt doesn't work, and the large, jutting fixtures detract from an otherwise well-executed exterior.

Even so, it's clear Chevrolet has finally taken to sweating the details on a vehicle like the 2013 Malibu. The sedan boasts incredibly tight and uniform panel gaps that help lend it a sense of quality largely absent elsewhere in the segment. The company also turned its attention to cleaning up the intermediate surfaces between interior and exterior, and as a result, you won't find any exposed fasteners or unsightly structural adhesive between the outer sheetmetal and the vehicle's newly plush innards.

Step indoors, and the Malibu welcomes you with a cabin that feels more expansive than its figures would suggest. The clever double-concave dash design serves up the impression of added spaciousness, despite the fact that the vehicle now rides on a wheelbase that's 4.5-inches shorter than the previous generation. Surprisingly, that abbreviation has had little impact on interior space. At 42.1 inches, front occupants will have to make due with . 1 fewer inches of leg room, but those in the rear will be forced to make a larger sacrifice. The 2013 Malibu offers up 36.5 inches of rear leg room, which is a full 1.2 inches less than last year.


This isn't a hardcore hybrid. At no point can the electric motor turn the vehicle's wheels by itself.

The real hitch in this giddy-up is that the Malibu isn't clearly better than any of its competition, at least in terms of interior volume. The Hyundai Sonata and Nissan Altima best the Chevrolet in front legroom, while the Ford Fusion, Honda Accord and Volkswagen Passat trump the vehicle in both front and rear categories.

The designers at Chevrolet have executed a very nice cabin, however. Quality materials abound on the upper dash with texturized soft-touch rubber. The door panels serve up a complex and attractive design with a quality feel all their own, and we appreciate the simplified center stack immensely. The seven-inch color LCD touch screen is a nice addition to the cabin as well, and while Chevy is proud of a hidden storage compartment behind the touch screen, the door feels cheap and flimsy compared to the rest of the interior.

Under the hood, GM has paired the same 2.4-liter four-cylinder Ecotec engine from the previous-generation Malibu with a 15 kilowatt electric motor and 115 volt lithium-ion battery pack. The engine alone produces 182 horsepower and 172 pound-feet of torque, though the electric motor adds in an extra 15 horsepower and 75 pound-feet of torque to that mix. Like other GM eAssist vehicles, however, this isn't a hardcore hybrid. At no point can the electric motor turn the vehicle's wheels by itself. Instead, the motor allows the 2013 Malibu to use a taller final drive gear than would otherwise be possible. That means the internal combustion engine can turn fewer rpm and consume less fuel while the electric motor picks up the slack.

In addition, the motor allows GM to cut fuel to the engine entirely upon deceleration, resulting in an aggressive auto stop system that further conserves fuel. The electric motor sits in the same location as the old alternator and is plumbed into the engine's cooling system to maintain optimum operating temperature regardless of the weather. GM has also graced the 2013 Malibu with an all-new six-speed automatic transmission, and while the car's paddle shifters have gone the way of the obsolete, the console-mounted shift lever now includes an up/down gear selector rocker on the top of the shift knob. Do yourself a favor and let the cogs swap themselves.

GM estimates that the 2013 Malibu can deliver up to 25 mpg city and 37 mpg highway, and the city figures fall fairly well in line with what we experienced during our brief time with the vehicle. Unfortunately, those numbers just barely beat out the base four-cylinder Hyundai Sonata and Toyota Camry and fall well short of both competitors' hybrid variants.

Behind the wheel, the Malibu Eco seems to suffer from nearly all the pitfalls of a hybrid vehicle without being able to offer buyers the benefits of dual-mode fuel economy. GM estimates the Malibu Eco can pull to 60 miles per hour from a dead stop in around 8.7 seconds, which is acceptable for a four-cylinder sedan. We have to wonder how the vehicle will perform with four adults and their luggage aboard, however. Throttle response feels murky and ambiguous and the vehicle's regenerative brakes are far from confidence inspiring.

Those downfalls are a real shame, too. Even with low-rolling resistance tires on all four corners, the Malibu is a confident and quiet driver at highway speed. The vehicle's steering is appropriately weighted and the comfortable front bucket seats kept us happy even after over three hours at the helm. We would have appreciated a little more power for quick two-lane passes, though chances are that has more to do with the vehicle's tall gearing and curb weight than actual horsepower figures. At 3,620 pounds, the Malibu Eco does have some weight to move around. The Chevrolet tips the scales at more than 300 pounds heavier than the automatic-equipped base model Sonata and Camry. Don't think all that heft comes from the Eco's battery pack, either. The tech weighs in at just 65 pounds.

GM has said that it when came to benchmarking vehicles for the next-generation Malibu, the company specifically looked inward with the aim of bettering the old model instead of besting the competition. To that end, the company has succeeded. The 2013 Malibu is better than the 2011 model, but based on our first drive, it still fails to stack up against the ranks of vastly improved D-segment vehicles on the market right now. With an even sharper Ford Fusion baking in the oven and substantially more efficient hybrid models from Hyundai and Toyota, the 2013 Malibu still finds itself trailing the pack. 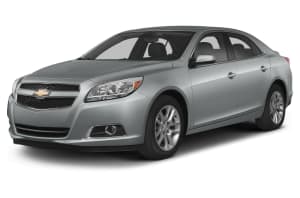