In a roundtable with reporters at an event related to the Tokyo Motor Show, Tetsuo Iwamura, President and CEO of American Honda, told us that he's been surprised by the Crosstour crossover's slow sales:

"In the case of the Crosstour, I'm really disappointed because that's a nice car, [with] very beautiful styling, and it gives very good driving performance as well as packaging. But yet, we went a bit too far."

The five-door CUV has been struggling since it went on sale as a 2010 model. Through November, Honda has sold just 16,679 units this year – down nearly 36 percent from the 25,927 units tallied by this point in 2010. Honda had initially projected annual sales of 40,000 units.

Iwamura confided that, in retrospect, launching the CUV branded as the Accord Crosstour was probably a "misstep," so the company subsequently shortened its moniker to Crosstour in order to give the vehicle more of a standalone identity. In our 2009 First Drive article, we praised the Crosstour's solid driving dynamics but criticized it for awkward styling, poor packaging and visibility, a short options list and premium pricing.

In our discussion with Iwamura, we noted that while Honda continues to enjoy solid sales numbers for its longtime mainstream offerings like the Accord, CR-V and Odyssey, newer models – particularly niche offerings – have had a tougher time finding buyers (see: CR-Z, Insight, Ridgeline). Iwamura expressed that Honda is actually "quite satisfied" with sales of most of its vehicle lines, maintaining that he sees nothing systematic within Honda that has prevented the company from generating new hit models. Further, Iwamura vowed to continue development of its niche players.

In the case of the Crosstour, Iwamura pledged, "With further refinement of styling and performance, it will be a very good success, a leading model." 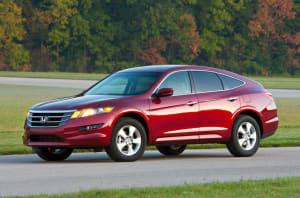