Despite consistently slow sales, Honda has executed a slight facelift for the Ridgeline's 2012 model year and begun offering a new low-cost Sport model (pictured) to enhance appeal. But the unibody four-door pickup's sales have been lackluster since its 2006 model year debut, leading to widespread speculation that the Ridgeline would disappear from showrooms altogether. The rumormill eventually built up enough steam that American Honda's Truck Planner, Sage Marie, was compelled to take the unusual step of addressing the gossip head-on last month with an official statement confirming the truck is "here to stay." However, that statement of support didn't shed any light on future developments for the model.

We're here in Japan for the 2011 Tokyo Motor Show, and we've had the chance to talk with Tetsu Iwamura, President and Chief Executive Officer of American Honda, about the future of the Ridgeline. According to Iwamura,

"Ridgeline is quite an important model to us. It's the only truck-type of model we have. We're fully aware of the importance of that model and we're trying to make that model grow much more. At this moment, there is no intention to stop the Ridgeline. In order to make Ridgeline much more attractive – in order to enhance Ridgeline – we are studying lots of things at this moment."

When further pressed if Honda remains fully committed to this segment, Iwamura confirmed that the company is indeed in it for the long haul, though he declined to say that that the Ridgeline would get a second-generation model. Still, it sounds like Honda is still expecting to offer something with a bed, and the Ridgeline can't continue to soldier on indefinitely as-is... might the Japanese automaker ponder a radical new direction like the rumored CR-V-based successor? 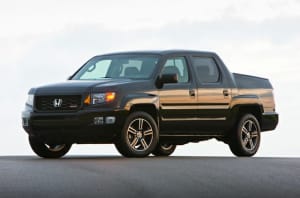